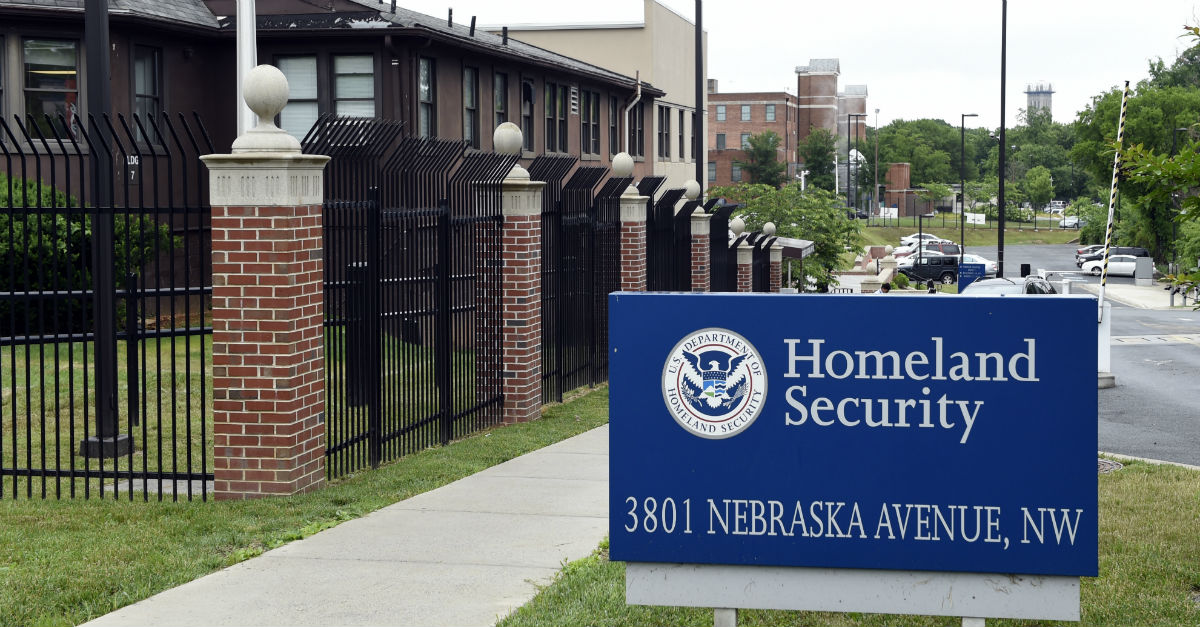 AP Photo/Susan Walsh, File
FILE - In this June 5, 2015 file photo, a view of the Homeland Security Department headquarters in Washington. The U.S. government has mistakenly granted citizenship to at least 858 immigrants who had pending deportation orders from countries of concern to national security or with high rates of immigration fraud, according to an internal Homeland Security audit released Monday, Sept. 19, 2016. The Homeland Security Department’s inspector general found that the immigrants used different names or birthdates to apply for citizenship with U.S. Citizenship and Immigration Services and such discrepancies weren’t caught because their fingerprints were missing from government databases. (AP Photo/Susan Walsh, File)

An inclusive new Department of Homeland Security rule proposes to log social media activity and search results on every immigrant in the United States, in perpetuity, as a condition of their immigration, a rule that even extends to legal permanent residents, naturalized citizens and non-native children adopted by Americans.

The rule — the kind of rule that’s so impossibly broad that it could only have originated in the halls of DHS — is scheduled to take effect on Oct. 18th.

In the Federal Register notice, DHS outlines its plan to modify the 1974 Privacy Act’s System of Records to collect “social media handles, aliases, associated identifiable information and search results” during the creation of an immigrant’s permanent record of “the transactions of an individual as he or she passes through the U.S. immigration process.”

The updated rule would codify a new bulk collection and surveillance practice for millions of people who are guilty only of possessing a label: immigrant. The program would institutionalize the notion that immigrants are a threat to America and thus require constant monitoring. And collecting social media and online activity in this manner would, by design, threaten the free speech of millions of people. After all, how “free” is a person if everything they post online is collected and categorized by the agency that determines if they stay in America?

Not to mention the identification and acquisition of “associated identifiable information,” another impossibly broad phrase written to describe almost anything on the internet. It’s deliberate.

This system won’t just be discriminatory, broad and invasive, it will ultimately be ineffective at its stated purpose.

In fact, three pilot programs have already been conducted. According to DHS’s own Inspector General in a February report, the programs using social media to screen applicants for immigration benefits lacked criteria to determine if it?s effective.

“Although the pilots include some objectives, such as determining the effectiveness of an automated search tool and assessing data collection and dissemination procedures, it is not clear DHS is measuring and evaluation the pilots’ results to determine how well they are performing against set criteria,” the report said.

It’s not even an entirely new methodology. Harvesting the social media information of immigrants, particularly as it pertains to discovering threats to National Security?, gained nationwide attention in the wake of the San Bernadino shootings in 2015. Tashfeen Malik, one of the shooters, made Facebook posts in support of violent jihad and exchanged private messages that indicated her intentions of committing an attack herself. While she endured three background checks to come to the United States, her posts weren’t discovered until 14 Americans were dead and 22 more were seriously injured.

DHS would have Americans believe the next San Bernadino shooter is out there, posting their intentions on social media, too. The department would argue that only a massive dragnet and permanent expansion of powers — not to mention ensnaring of millions of innocent people, including American citizens — will expose them.

But even in the two-year-old San Bernadino case, it wasn’t that simple. Malik made those posts behind strict privacy controls and under a pseudonym. Her private messages, at least on Facebook, would not have come to light without a search warrant, according to Facebook’s own guidelines for law enforcement.

One thing that did come out of the San Bernadino shooting investigations was a prolonged argument about the nature of encryption and the balance between encrypted privacy and national security. The federal government, after moving to take Apple to court, found a third party to unlock the phone of the other San Bernadino shooter, Syed Farook. The argument was that using an exploit to get through encryption on Farook’s phone was a “one-time” use in this extraordinary; Apple, being Apple and knowing how these things work, disagreed.

A similar debate took place around the same time over encrypted messaging apps like Signal and Whisper. Both show that terrorists are becoming more sophisticated, not less — and that bulk harvesting social media posts and search results of every non-native-born American citizen is almost primitive by comparison.

The change, as proposed, is a mistake — one that threatens some of the very freedoms that attract people to the United States.