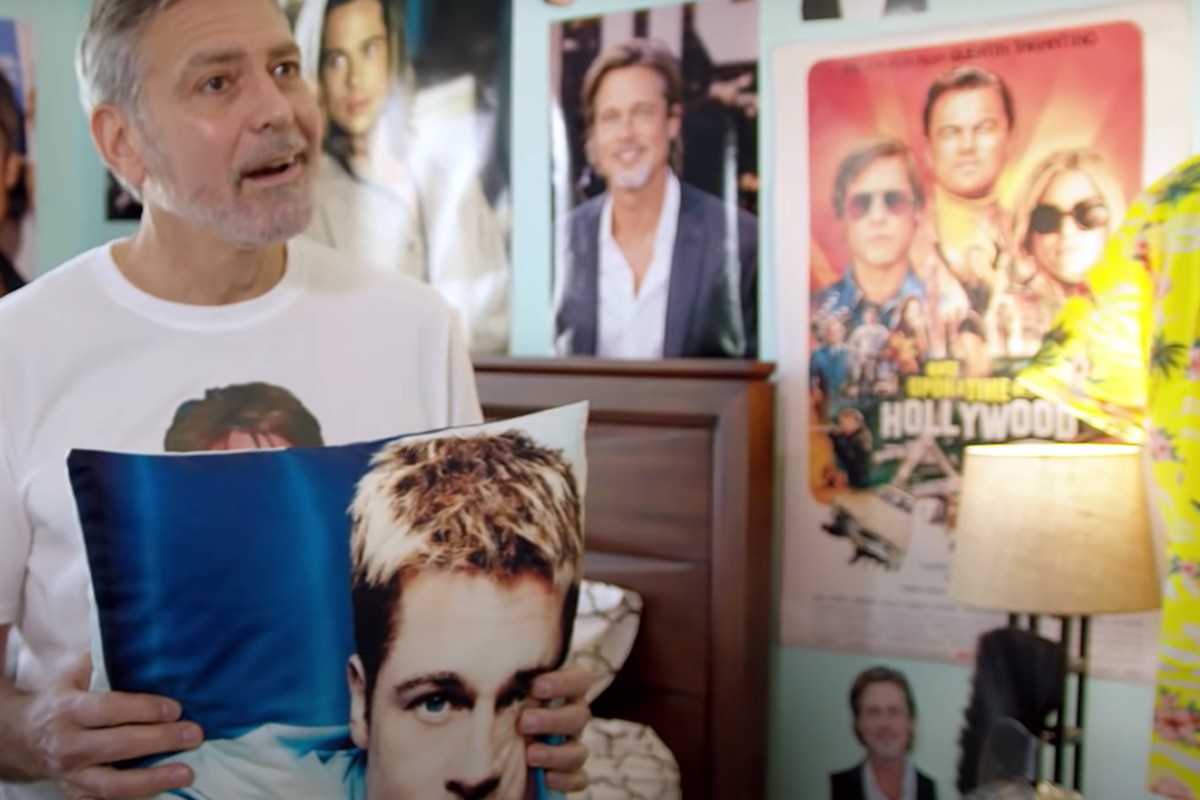 Shattering tabloid rumors that the two Oceans Elevens co-stars are on rocky terms, George Clooney just released a hilarious video that pays homage to his long-time pal Brad Pitt. Clooney created the video, World’s Worst Pandemic Roommate, to promote an Omaze contest raising money for his charity, The Clooney Foundation for Justice. According to the Academy Award-winning actor, the charity is out to “advocate for justice through accountability for human rights abuses around the world.”

The contest is available at omaze.com, and the winner will be announced in August.

As part of the prize, the winner gets to have lunch with Clooney and his wife Amal in Lake Como, Italy, which Clooney teases at the start of the video as an opportunity to form a lifelong friendship — much like the one the Midnight Sky star says he built with a random roommate during the COVID-19 lockdown.

The video sketch continues on to tell the tale of how Clooney became the unlikely roommate of a “normal guy” named Byron last year. The Oscar winner and his new roomie get stuck together after Clooney attempts to purchase a Batman action figure from Byron on Craigslist — right when the stay-at-home order is announced.

“We’re basically best friends now, but don’t take my word for it, just ask him,” the A-list actor says in the video.

“Do I recommend hanging out with George Clooney?” his roommate Byron asks. “No, I do not. So, basically, George Clooney swung by my house to pick up something he was buying from me on Craigslist, and the stay-at-home order hit and he never left. Moral of the story is, don’t use Craigslist.”

The video continues to tell the story of this odd couple, basically revealing what a terrible roommate Clooney is: He hogs the bathroom for hair and makeup, pays rent with signed headshots of himself, and Zoom bombs Byron’s online job interview. Worst of all, Clooney is totally obsessed with Brad Pitt, covering his room with Brad Pitt posters, leaving Brad Pitt standup cardboard cutouts everywhere, and making Byron watch Ocean’s 11 more than two dozen times.

“Can you believe Amal wanted me to throw this away?” Clooney says at one point, hugging a pillow with Pitt’s face on it. “I’m not throwing this out. No way, man. Thank you for giving me a place for me and Brad.”

“It was an unforgettable time,” the star says at the end of the clip. “We laughed, we learned, we lived. So, naturally, when the stay-at-home order was finally lifted, Byron and I knew that we had a tough decision to make.”

But Byron was just about through with the Brad Pitt-obsessed diva.

Never mind the rumors of their bromance being torn apart by Brad Pitt’s ex-wife, Angelina Jolie. (Gossip columns like to theorize that Clooney was closer to Pitt’s first wife, Jennifer Aniston, but never got along with Jolie; while others allege the two A-listers feuded over Julia Roberts.)

In real life, sources confirm, Clooney and Pitt are and always have been best buds. Their Hollywood bromance has blossomed over the course of filming several movies together, including Ocean’s Eleven, Ocean’s Twelve, Ocean’s Thirteen, Burn After Reading, and Casting Couch. Whenever the actors appear together at a premiere, photocall, and on the Los Angeles red carpet, they’re constantly cracking up and goofing off like a couple of schoolboys.

As you might have guessed from the lighthearted video, the two celebs enjoy pranking each other. Clooney revealed in an interview with GQ that Pitt played a prank on him while filming Ocean’s Twelve in Italy.

“We shot some of it in Lake Como which is my hometown,” Clooney remembered. “Brad sent out a memo to all the people in the town – my town, I’d lived there for years – he had it posted on telephone poles and said ‘The movie is coming to town and please only address George Clooney as Mr. Clooney or his character name of Danny Ocean and don’t look him right in the eyes.'”

The prank may have been revenge for a stunt Clooney pulled while filming Ocean’s Eleven, when Clooney secretly put a bumper sticker in the shape of a pot plant that said “F–k cops”.

Fun fact: they’ve also twice been named People Magazine’s “Sexiest Man Alive”. Along with Johnny Depp, Clooney and Pitt are the only actors to win the coveted title two times.