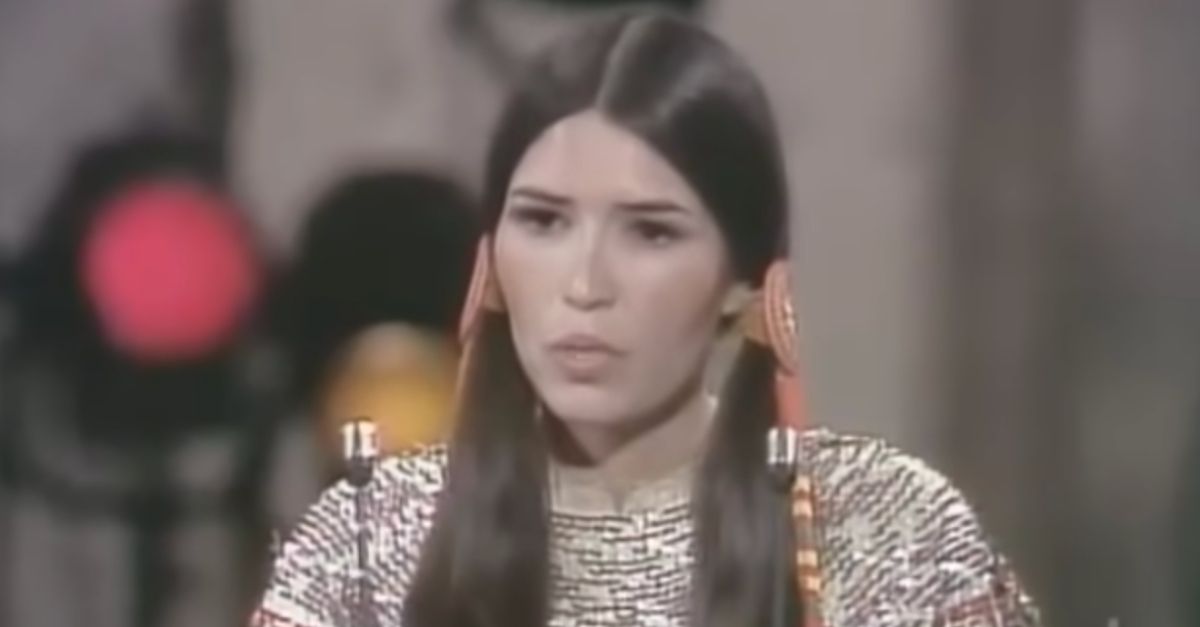 Sacheen Littlefeather, the famous Apache actress and Native American activist, has finally given the full speech she was supposed to rightfully give almost 50 years ago. On March 27, 1973, at the 45th Academy Awards, actor Marlon Brando was nominated for “Best Actor” for his role in The Godfather. As an involved civil rights activist against the mistreatment and misrepresentation of Native Americans in American movies, he sent Littlefeather in his place.

Native American actress and activist Sacheen Littlefeather and Marlon Brando came to know each other through their involvement with the American Indian Movement (AIM), after Littlefeather contacted Brando about his interests in Native American issues through her neighbor, director Francis Ford Coppola. Brando was a known activist for AIM, and they finally met while Littlefeather was giving a presentation on minorities in Washington, D.C.

Playing Vito Corleone in the 1972 hit The Godfather, Brando was favored to win “Best Actor” for the role in the 1973 Academy Awards at the Dorothy Chandler Pavilion in Los Angeles, California. However, seeing that the siege at Wounded Knee on the Pine Ridge Indian Reservation in South Dakota was ongoing, Brando, again, as an involved activist in better representation for Native Americans, decided to boycott the ceremony and send Littlefeather in place to politely decline the award.

With his 4-page speech in hand, Littlefeather, in an Apache buckskin dress, was ready to represent Brando, who, keep in mind, had asked her to go in his place. What followed was upsetting, to say the least. She was told before she was to accept Marlon Brando’s Oscar (actually, decline in this case), she only had 1 minute to deliver her Oscar’s speech, or else they would remove her from the stage.

When the time came, actors and presenters Liv Ullmann and Roger Moore announced Brando as the winner, and Littlefeather walked onto the stage. Raising her hand, she gracefully declined the Oscar trophy that Moore was giving to her, and gave the best speech she could with what she was forced to work with.

Hello. My name is Sacheen Littlefeather. I’m Apache and I am president of the National Native American Affirmative Image Committee. I’m representing Marlon Brando this evening, and he has asked me to tell you in a very long speech which I cannot share with you presently, because of time, but I will be glad to share with the press afterwards, that he very regretfully cannot accept this very generous award. And the reasons for this being are the treatment of American Indians today by the film industry – excuse me [boos and cheers] – and on television in movie re-runs, and also with recent happenings at Wounded Knee. I beg at this time that I have not intruded upon this evening, and that we will in the future, our hearts and our understandings will meet with love and generosity. Thank you on behalf of Marlon Brando.

As Moore led her off the stage, she was surrounded by a chaotic mix of jeers, criticisms, cheers, and applause. Although rudely interrupted during her limited speech at the ceremony, she was able to read the full speech given to her by Brando to say in his place to journalists. The speech transcript was published in the New York Times the next day.

Littlefeather’s brave actions spurred the Academy of Motion Picture Arts and Sciences to ban future representation in accepting Academy Awards. She was also criticized and ridiculed that night by other celebrities including Raquel Welch, who insensitively said, “I hope the winner doesn’t have a cause, before announcing who won “Best Actress,” and Clint Eastwood, who callously joked that he was presenting the “Best Picture” award “on behalf of all the cowboys shot in John Ford westerns over the years.” She also recalls “how actor John Wayne was held back by security because he was outraged by her. However, Littlefeather’s brave act also inspired other celebrities to stand up.

Littlefeather was thanked by Coretta Scott King for her speech, and at the 87th Academy Awards ceremony in 2014, Jada Pinkett Smith followed suit in boycotting the ceremony due to misrepresentation in the nominations. She credited her own bravery back to Littlefeather. And although Brando and Littlefeather were criticized for the timing of their protest, Brando told Dick Cavett of the Dick Cavett Show, “They should have at least had the courtesy to listen to her.”

The trouble didn’t stop there for Littlefeather. Although for the third time, to no one’s fault, Brando had asked her to take his place and speak his words, she continued to suffer the brunt of Hollywood during that time. She was receiving threats and was falsely portrayed by the media, and also claimed that she was blacklisted by the United States federal government in their attempt to control Native American activism after Wounded Knee.

Nevertheless, on March 23, 2018, almost 50 years later, Sacheen Littlefeather finally gave the full speech publicly with no limits, no censors, no interruptions, and no issues. Hosts Delores Schilling and Vincent Schilling discussed with Littlefeather on their online radio show, Native Trailblazers, what happened that fateful night in 1973. She then read the speech, called That Unfinished Oscar Speech, to an audience loud and clear for the first time.