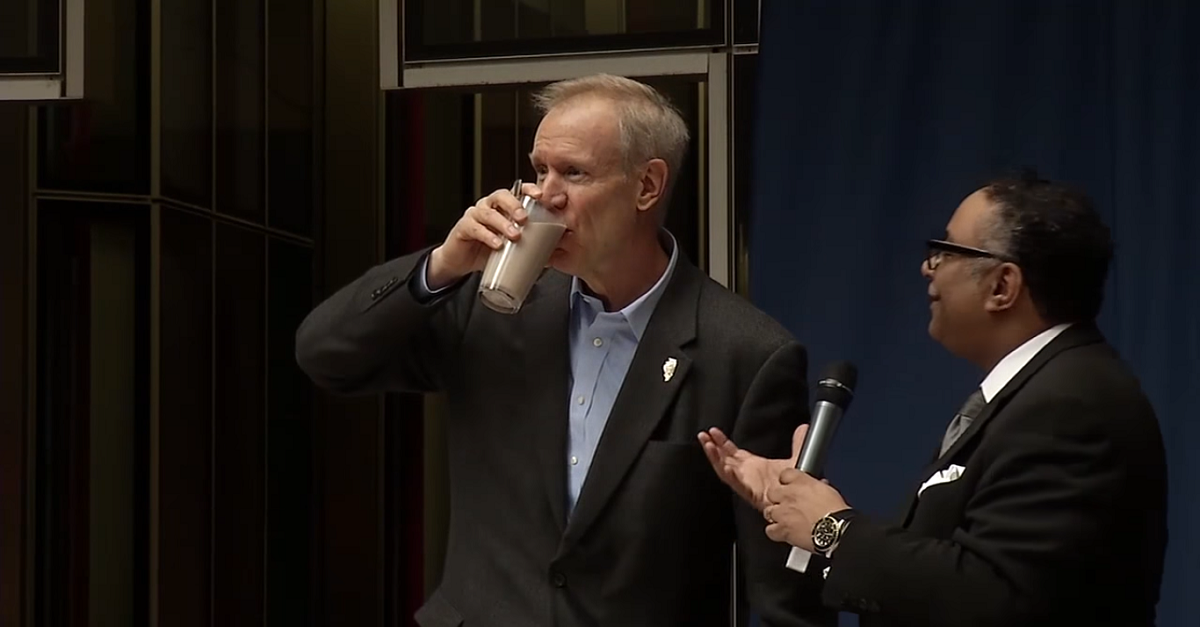 In a political climate where it seems to easy to be left speechless at the shallow, hallow, and just straight-up confusing actions but some of this country’s elected officials, Illinois Governor Bruce Rauner managed to continue to stir things up.

RELATED: After fifty-five years of being mayor, ninety-one-year-old retires

At the Thompson Center on Wednesday at a event promoting workplace diversity led by Hyatt Hotels diversity and inclusion executive Tyronne Stoudemire, the two decided to act out a rather unfortunate metaphor about the lack of diversity hiring.

Stoudemire, who is black, poured a glass of milk for Rauner, noting that the milk represents the skin color of most leaders of organizations.

?This chocolate syrup represents diversity,? said Stoudemire and added some syrup to the milk. ?When you look at most organizations, diversity sits at the bottom of the organization,? Stoudemire added. ?You don?t get inclusion until you actually stir it up.?

While the Chicago Tribune notes that Stoudemire has been using this analogy for 16 years at various corporate events, it is Rauner that has become the face for this humiliating and embarrassing spectacle.

And naturally, the Internet had a field day with it.

I swear to god I just witnessed Illinois Gov. Rauner stir Hershey's syrup into milk, and take a big sip to symbolize his commitment to diversity. pic.twitter.com/E3rOFZ6wuC

Tio Hardiman, who is runnning for governor himself even commented on the event.

The sad thing is at least Rauner is evening attempting to try at understanding what diversity means. Jeanne Ives who is running against Rauner on the Republican ticket recently released one of the most racist and homophobic campaign ads one couldn’t even imagine in the deepest throes of a fever dream.

And this shouldn’t need to be said, but at least Rauner isn’t a Nazi, like Arthur Jones who is running unopposed in the state’s 3rd Congressional District.

For better or worse, the crowd at the Thompson Center wasn’t hating on the milk drinking. Apparently, they were lapping it up.

For the record, the assembled crowd of state functionaries and corporate leaders applauded rapturously.

Take a look for yourself: