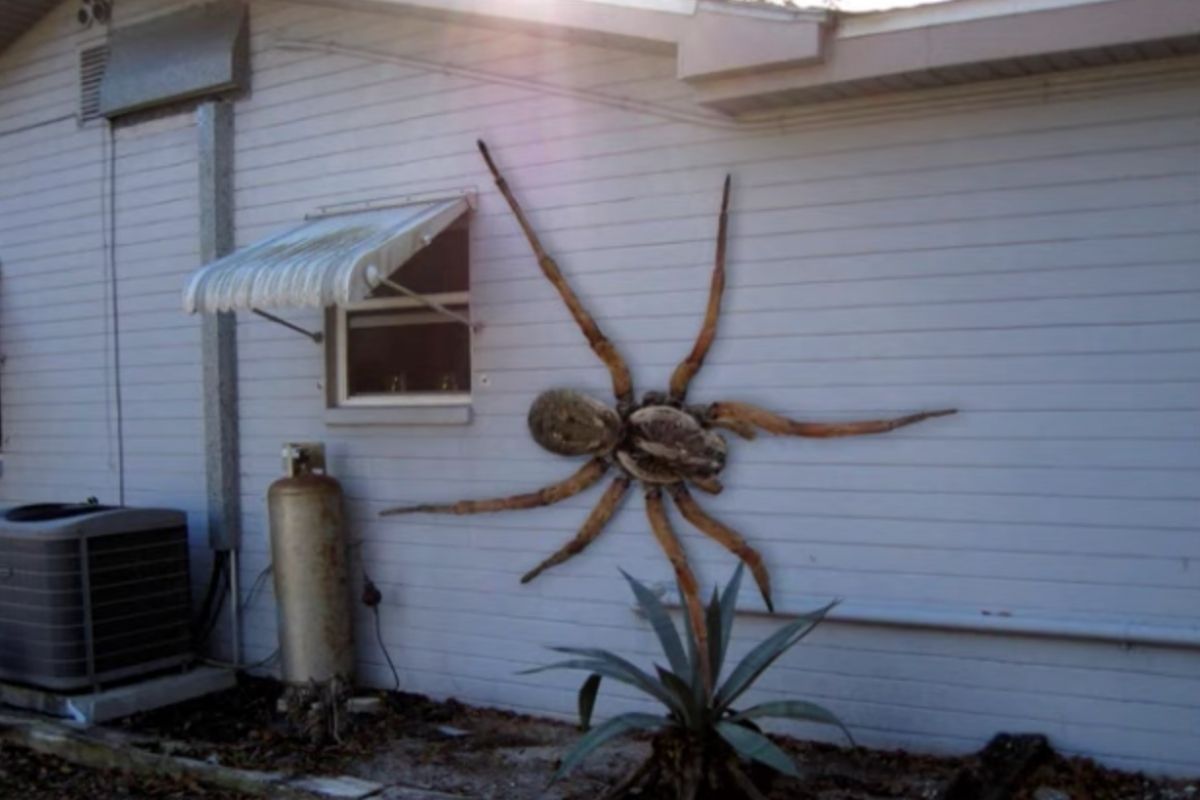 Similar to the Taco Bell closing rumors, this image of a large brown spider with an outrageous leg span has given more than arachnophobes a reason to worry. According to the internet, the reason for all our nightmares is called the Florida Cane Spider. But I am here to tell you that it is absolutely false and it is simply the work of a Florida-residing artist, musician, and photographer that had a little bit of free time on his hands. Here’s the real scoop on this running hoax of a giant spider.

The first time the internet saw said arachnid was back in 2011. Paul Santa Maria captured a photograph of a wolf spider outside of his home in Florida and doctored it into a monstrosity with a bigger body and longer legs, placing it on the side of a house. The original caption on his Facebook post was “Sure You Want To Move To Florida?” From there, the image went viral. But the image was reported and was only online for less than a day before it had taken on a life of its own.

It has been photo edited and shared under many names. A few of tales assigned to the spider are:

“… Spider call the Angolan Witch spider. They migrated from South America. They primarily eat dogs and cats In Texas this abnormally large spider was found on the side of this home. It took several gunshots to kill it.”

Then again in 2015, it resurfaced with the claim,

“This morning I heard something climbing around on the outside of my townhouse. I thought maybe it was the maintenance people repairing the Hardiplank siding, but when I got outside I saw this giant spider! The very rare Giant Cane Spider can grow up to six feet across. They are ‘mostly harmless’ but scary as hell.”

It came back a third time in 2017 on mood-board centered social site, Pinterest, under an “arachnids” board.

The Cane Spider is actually a real species of spider, also known as the huntsman spider, the giant crab spider, or heteropoda venatoria. However, the common names Giant Hawaiian Cane Spider, Angolan Witch Spider and Florida Cane Spider are all entirely fake! Cane spiders reside in Hawaii, but barely even have a 5in leg span. They also almost solely eat insects and cockroaches, so, no need to worry or hide your pets. Even the world’s largest spiders are much smaller than these!

With this information, we can rest easy and be prepared for when it comes back in about two years with a scarier name for the biggest spider! They aren’t poisonous like the Brown Recluse of the Black Widow, because their spider bites do not generate enough venom, so maybe we can consider them as friends. But while we wait, might I suggest delving into some of the sounds/art of Paul Santa Maria, the man who fooled us all! Here’s a clip of the man himself, explaining what he intended to be a funny creative post.

Editor’s note: This article was originally published on July 19, 2019.