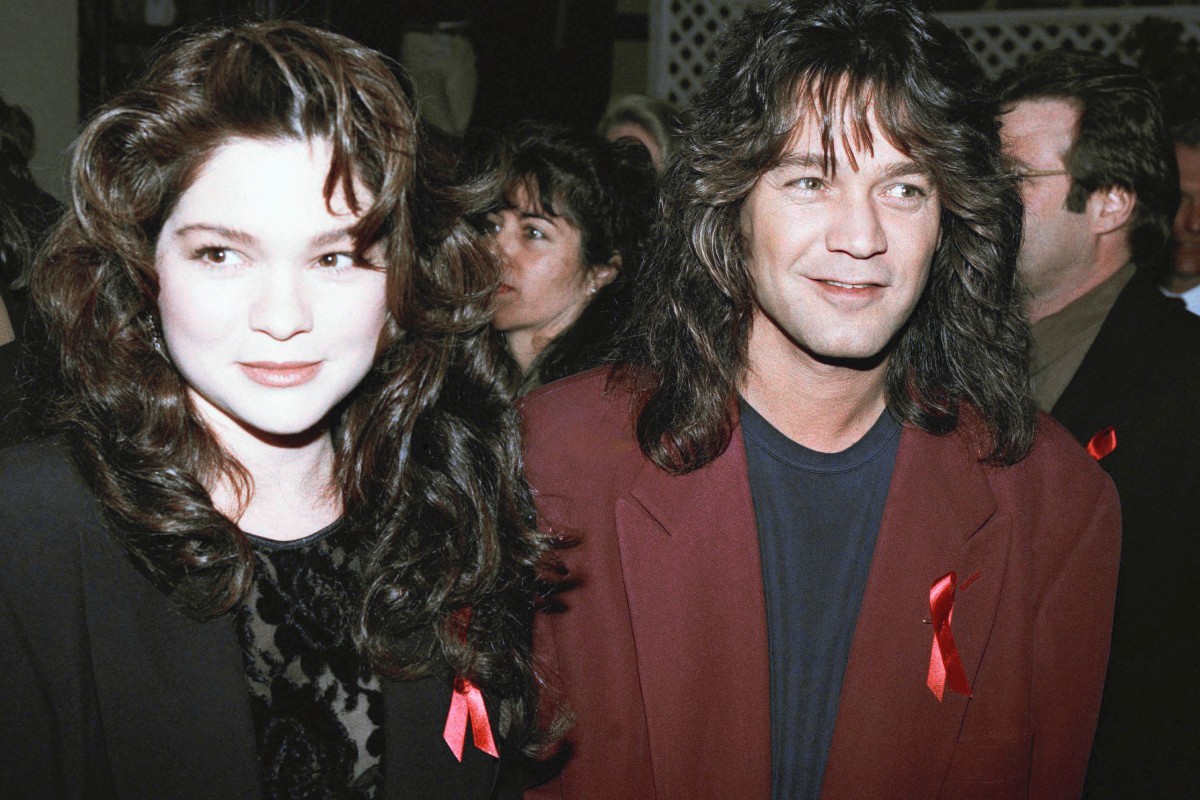 When Valerie Bertinelli was invited to a Van Halen concert by her brothers, she wasn’t sure she wanted to go. But then, she saw a picture of lead guitarist and her future husband Eddie Van Halen.

“I took a look at the 8-track cassette that was in the back of my Corvette … and I saw a picture of Ed, and I went, ‘Oh, yeah, I’ll be going. He’s a cutie,'” Bertinelli told Oprah. Already famous for her role as Barbara Cooper on the TV sitcom One Day at a Time, the 20-year-old actress used her connections to get herself backstage to meet the guitar legend. Band manager Noel E. Monk remembers their meeting in his memoir, “Runnin’ with the Devil”, claiming that they had “instant chemistry”.

“I guess she’s got a little crush on Edward,” the show’s promoter had explained to Monk when she asked to come backstage.

“It was kind of cute to see them together— they were both clearly nervous and somewhat reticent,” Monk remembers. “This struck me as a sign of genuine chemistry. After all, Valerie had spent most of her life in front of a camera or audience; she was completely comfortable with all manner of public interaction. And yet, here she was, stammering and blushing like a schoolgirl in the presence of the captain of the football team. And Edward? Here was a guy who went out on stage every night and performed, wizardlike, in front of thousands of adoring fans. In the presence of this young woman, however, the rock star facade melted away.”

And so begins the bittersweet love story of Eddie Van Halen and Valerie Bertinelli.

Within a few months of meeting, Eddie and Valerie had already set a date for their wedding. After the ceremony, the rocker somehow managed to get drunk in the minutes following the ceremony, and ended up hunched over the toilet bowl with Valerie holding his hair.

“She coaxed Edward to his feet, cleaned him up, straightened his tie, and helped him comb his hair,” writes Monk. “In her eyes I saw not disappointment but compassion and love…They emerged from the bathroom hand in hand, and made a glorious entrance into the grand ballroom, where a crowd of family and friends and an assortment of Hollywood stars burst into applause.”

Things only got rockier from there. The legendary guitarist suffered from substance abuse, and his bad-boy ways took a toll on their relationship. In the beginning, Valerie tried to keep up. She started doing cocaine in an effort to stay skinny. Eventually, even Eddie had to admit she had a problem. In an effort to help his wife out, he took her out for a chili cheese dog and fries. In her memior, Losing It, Valerie credits her husband’s actions as helping “save me from a serious eating disorder”.

But even after Valerie quit doing coke in 1984, their relationship continued to collapse. “There was a lot going on: Ed’s fights with Dave [David Lee Roth], Ed’s drinking and coke, his obsessive work habits,” she recalls.

10 years after tying the knot, the couple welcomed their son Wolfgang Van Halen into the world. But their child wasn’t able to save their doomed marriage. “There’s no question that Valerie had strong feelings for Eddie,” writer Joel Selvin penned in his memoir, “Red: My Uncensored Life in Rock”. “I don’t know that she got sick of him. But I do think she got sick of the alcohol and the drugs.”

In 2001, Eddie and Valerie divorced. Their marriage had been rough. Valerie told Oprah that part of the reason she divorced her husband was out of concern for her son. “One of the many reasons that Ed and I split up is to give Wolfie a better vision of what two people who are supposedly in love treat each other like,” she said. “Ed and I weren’t treating each other like two people that loved each other, and that’s what Wolfie was seeing.”

After their divorce, Eddie and Valerie remained close. Valerie attended her ex-husband’s next marriage to Janie Liszewski. Later, Eddie and his new wife attended Valerie’s wedding to Tom Vitale. Meanwhile, their son Wolfgang joined his father’s band as a bassist at the tender age of 15. Eddie was reportedly 12 years sober when he died at Providence Saint John’s Health Center in Santa Monica, California on October 6, 2020. Upon Van Halen’s death, Valerie tweeted a photo of the couple and their newborn son.

“40 years ago my life changed forever when I met you,” she captioned the pic. “You gave me the one true light in my life, our son, Wolfgang. Through all your challenging treatments for lung cancer, you kept your gorgeous spirit and that impish grin. I’m so grateful Wolfie and I were able to hold you in your last moments.”

“I will see you in our next life,” she wrote.