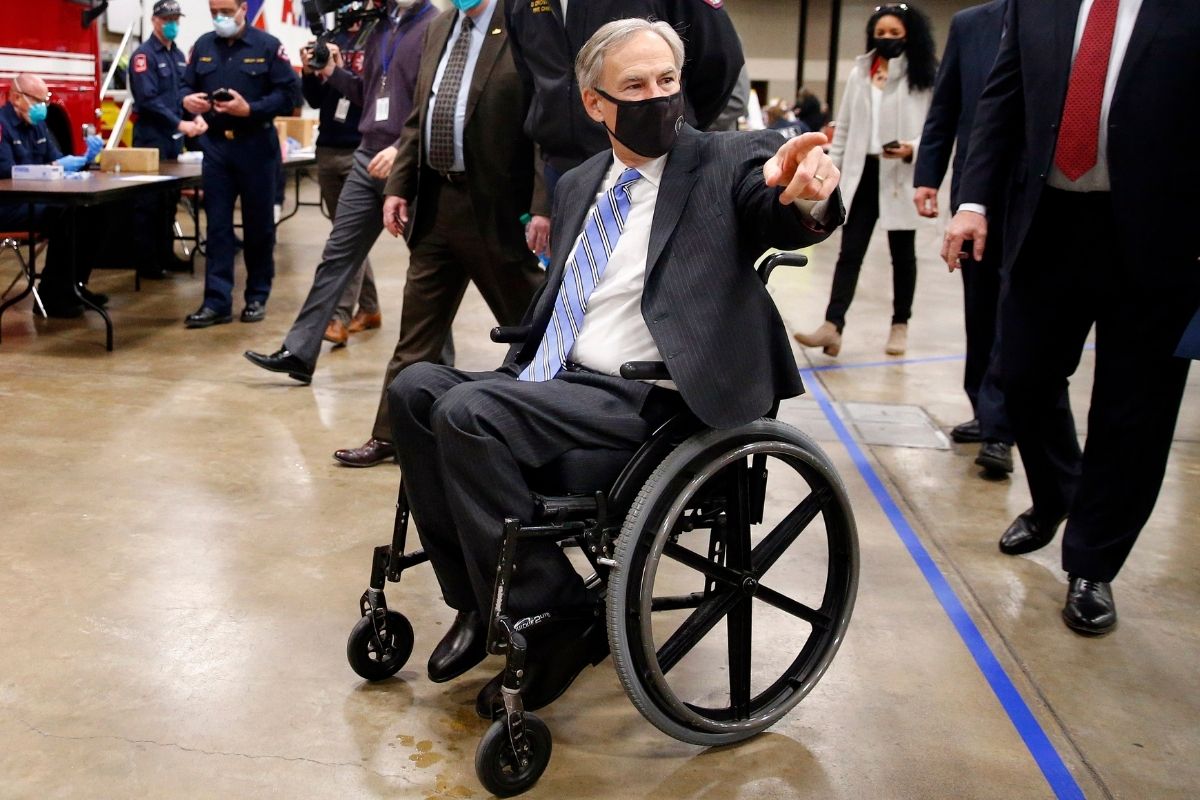 Politics will continue to remain controversial as people remain divided on how issues such as former President Donald Trump inciting the US Capitol riots and the recent sexual allegations against Governor Andrew Cuomo should be handled. But one controversy has recently resurfaced as Texas became one of the first states to lift the mask mandate, despite the prevalence of COVID-19. And that controversy deals with Governor Greg Abbott and his wheelchair.

“I just announced Texas is OPEN 100%. EVERYTHING. I also ended the statewide mask mandate.” is what Gov. Greg Abbott of Texas posted to his Twitter account following his official announcement that Texas businesses can be open at full capacity and that Texans are not required by the state to wear masks.

According to the Austin American-Statesman, the controversial mandate sparked rage and uproar, with many businesses posting to their social media platforms that they will still require customers to wear masks in their buildings and others claiming that the Republican governor is endangering lives. The outrage brought national attention to the Texas governor, as well as the story behind his wheelchair. So what happened to him?

Why Does Gov. Greg Abbott Use a Wheelchair?

In July 1984, Abbott, a 26-year-old recent law school graduate in Houston, Texas, went jogging to take a break from studying for the bar exam. As he was running his normal route through a rich neighborhood, a large oak tree fell on his back, paralyzing him from the waist down. The freak accident resulted in several crushed vertebrae that splintered his spinal cord, broken ribs, and damage to other vital organs. Doctors were able to put in two steel rods in his vertebrae, bringing back together with his new steel spine, but Abbott would remain paralyzed for the rest of his life.

Last year, two staffers at Empower Texans, a Republican party advocacy group, were caught making jokes about Abbott and his wheelchair use. The comments were heard on an unedited version of the Empower Texans’ podcast, Texas Scorecard Radio, featuring the group’s vice president Cary Cheshire and general counsel Tony McDonald. It was replaced by an edited version later that day.

In the unedited version, Cheshire and McDonald start laughing at the joking references they had previously made about Abbott using a wheelchair before his 1984 accident. Cheshire said, “I feel like before there was a switch I could flip to avoid that, and I’m just so frustrated that I’ve flipped it off. He’s such a revolting piece of sh*t.”

They were in the midst of criticizing Abbott’s comments that allowed local officials to order businesses to require customers to wear masks because of the coronavirus pandemic. However, confusion arose over which specific local officials could actually mandate mask use under his statewide orders, with Cheshire referencing the mask confusion, saying, “It’s like, I have created this riddle for you and you have figured out how to f*ck your citizens with it — ‘Great job, I’m with you,’ And it’s like, you’re an awful piece of sh*t,” and Mcdonald adding that Abbott, “created a sh*tty policy that’s vague because he wanted to avoid accountability.”

Mcdonald also said, “Well, just like, f*ckin’ say it. Don’t clown around. ‘You read between the lines.’ Well, f*ck you.”

The two were eventually suspended and condemned by Lt. Gov. Dan Patrick and other GOP leaders including Senator Ted Cruz, Senator John Cornyn, and Attorney General Ken Paxton. Empower Texans CEO Michael Sullivan personally apologized in a statement to Abbott, saying that he was, “heartbroken by the language and tone,” explaining, “Both have been suspended from all public activities with the organization immediately, and additional internal actions will be taken. Whether it was a private conversation or not is unimportant; it was wrong and unacceptable.”

In 1985, Abbott sued the homeowner, divorce lawyer Roy W. Moore, whose large oak tree had fallen on him, along with the tree service company, the Davey Tree Expert Company, who had inspected the tree before it came crashing down. He claimed that Moore and the tree company, “were negligent for failing to warn people about the dangerous tree or to take action to prevent it from falling,” according to the Texas Tribune.

The lawsuit also specified that Abbott had, “suffered injuries resulting in physical pain, mental anguish and physical impairment, as well as the reduced capacity to work and earn money,” but Moore believed that he was not responsible, blaming the Davey Tree Expert Company. The tree care company records indicate, however, that they inspected Moore’s trees in 1983, finding them in “pretty good condition,” but accounted for the tall one that fell on Abbott, noting, “There is some basal decay in the post oak, but that can’t be corrected.”

Nevertheless, according to Abbott, the tree care company recommended fertilization, which he stated was the wrong treatment for basal decay. When they reached a settlement in 1986, Abbott was entitled to receiving monthly income with interest to accommodate for the rising costs of living, as well as periodic lump-sum payments. His first settlement was $300,000, with monthly payments of $5,000. His last settlement due in 2022 is for $740,020, and by the end of 2013, he had received a total of $5.8 million in both lump sum payments and monthly income. The proceeds are also tax-free and do not have to report to the IRS.

Abbott’s former lawyer explained how most of the settlement came from noneconomic losses for pain, suffering, and mental anguish, saying, “The strength of this case was in the intangibles — the noneconomic items.”

Controversy sparked when Abbott served on the Texas Supreme Court from 1996-2001, but seemingly supported policies that ruled in opposition of his life-changing experience. In 1995, lawmakers capped damages and accidents resulting from noneconomic losses at $750,000, with conditions for plaintiffs who also tried to collect from multiple defendants. By 2003, the cap for noneconomic damages in medical malpractice cases was put at $250,000, which Abbott avidly supported, with no built-in increases for the rising cost of living.

Abbott explained that medical malpractice reforms were needed to keep Texas doctors from leaving due to floods of “meritless lawsuits,” and he also claimed that it worked. Critics found that the reforms were actually meant to help insurance companies, preventing injured parties from claiming benefits too frivolously. Although it’s still argued whether Abbott would actually get that same amount today, Abbott has been criticized for the irony in supporting these reforms despite the history of his situation.

“In 1984, Greg Abbott sought out and received justice following a horrible injury, rightly so…receiving millions of dollars. And I’m glad, he deserved justice for the terrible tragedy that he endured. But then he turned around and built his career working to deny the very same justice that he received to his fellow Texans rightly seeking it for themselves. Greg Abbott got his justice. Why doesn’t he believe that a rape survivor or a person with a disability or a victim paralyzed forever…should get justice too? What makes Greg Abbott think it’s okay to deny them, his fellow Texans, the justice that he rightly went to court to receive?”