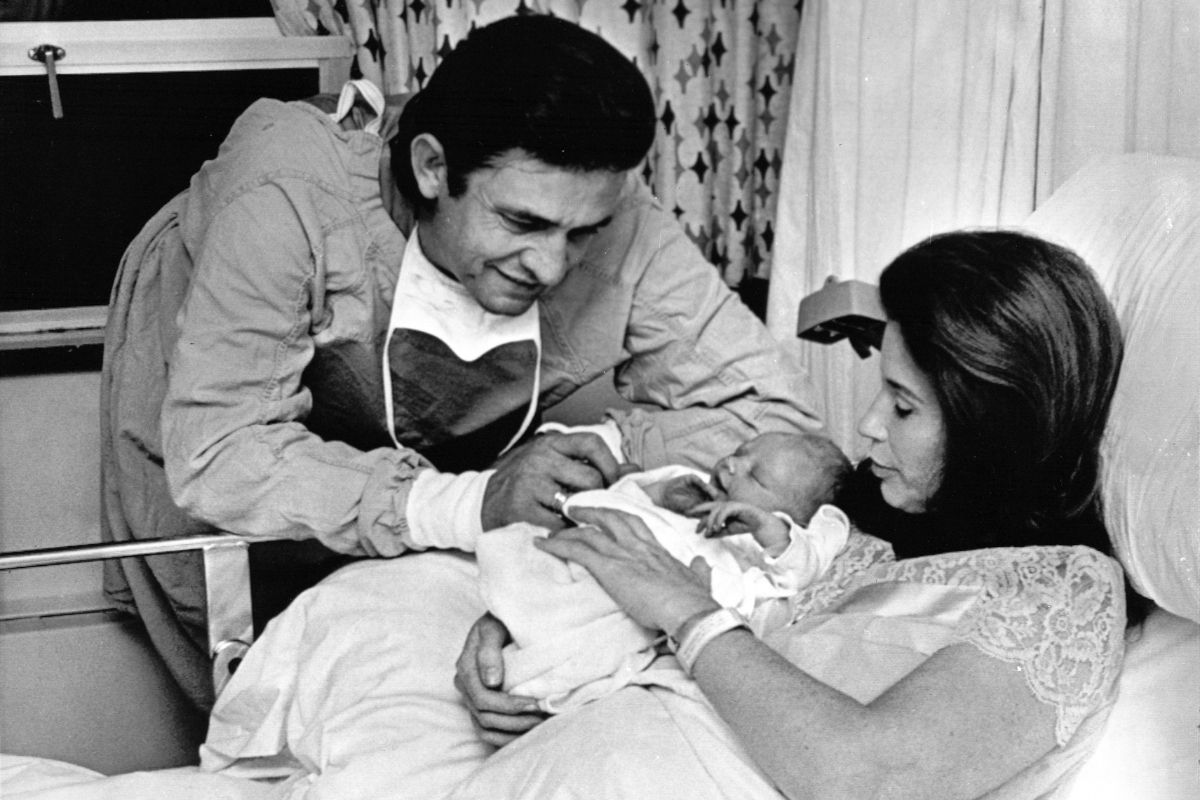 Johnny Cash and June Carter Cash were two strong-willed artists who shared a love story that was the stuff of myth. The Oscar-winning 2005 biopic Walk the Line, which starred Joaquin Phoenix and Reese Witherspoon as the country music legends, illustrated that personal history for mainstream audiences. But there is so much more to learn about the turbulent, honky-tonk romance that mesmerized a generation of country and folk fans.

Johnny Cash, born J.R. Cash, was born to a poor farming family and grew up in Cleveland County, Arkansas. Johnny was the middle child of seven, but he was closest to his older brother, Jack. Sadly, Jack was killed in gruesome table saw accident when J.R. was only 12 years old. Walk the Line portrays this horrific tragedy in viscerally disturbing detail that emphasizes the cold reaction Cash’s father, Ray. Instead of comforting his living son, Ray picks on J.R. and blames him for Jack’s death.

Was Ray Cash really as mean as Walk the Line might have you believe? Johnny Cash himself didn’t often speak publicly about his relationship with his father. But in a talk with the Academy of American Achievement in 1993, he said, “I don’t ever remember a really cross, unkind word from my father. He was a good, strong man who provided for his family. That was his sole purpose in life when I was growing up.” That characterization contradicts a statement by his daughter, Kathy, in Michael Streissguth’s Johnny Cash: The Biography: “Grandpa always kind of blamed Dad for Jack’s death. And Dad had this, just real sad guilt thing about him his whole life.”

It’s generally recognized that this early traumatic event shaped Johnny Cash’s outlook on the world and led to his more creative endeavors. It was then that Cash began to play the guitar and write original songs. He found influence in the radio, where he could hear gospel music and even Irish traditional folk. Cash was also inspired by his mother, Carrie, who loved music and played herself; the whole family enjoyed singing hymns together. Of course, Cash’s voice was not yet transitioned to the gravelly bass-baritone that made him a star.

As soon as he graduated high school in 1950, Johnny Cash enlisted in the Korean War and was stationed in Germany. While overseas, Cash founded a band called The Barbarians and kept up a long-distance relationship with his then-girlfriend, Vivian Liberto. Liberto and Cash had met at a roller rink only weeks before he was shipped out. They maintained contact through writing copious love letters and married when he returned in 1954. Then the couple moved to Memphis to start their family, and for Cash to start his musical career. In Memphis, Cash met the guitarists Luther Perkins and Marshall Grant who played his backup as The Tennessee Three. When the band scored a meeting with Sun Records producer Sam Phillips (who claims credit for Cash’s nickname, “Johnny”) Cash wowed him with his original “Hey Porter” — not the more well-known “Fulsom Prison Blues,” as Walk the Line suggests. (Watch Johnny Cash perform “Fulsom Prison Blues” below, live at San Quentin in 1969.)

After the meeting Sam Phillips, Johnny Cash’s career took off. Within a year, Cash was making his Grand Ole Opry debut following the release of “I Walk the Line.” Contrary to the scene in Walk the Line where June Carter uses the phrase to tease Johnny and his bandmates, the song was already a hit by the time that Johnny Cash was introduced to June Carter backstage at Nashville’s premier venue, the Grand Ole Opry in 1956.

June Carter was already an established country singer-songwriter when she met the Man in Black in Nashville at the Grand Ole Opry. Her 1953 solo, “Jukebox Blues” was a popular country music tune. Early success in her life came as no surprise. June Carter, born Valerie June Carter, was raised in Virginia by a whole family of musicians: a folk band literally called the Carter Family. There was never any question that little June would follow in their footsteps. She was performing alongside her mother, Maybelle Carter, uncle, and aunt by the time she was only ten years old. Before long, June and her sisters had their own act and traveling the country with Maybelle and her siblings, Helen and Anita, as the Carter Sisters to perform live, on the radio, and of course, at the Grand Ole Opry.

When performing with the talented Carter Sisters, June had to work harder to get noticed. But June Carter knew hard to work a crowd. She started imbuing performances with comedy, unafraid to be the butt of a joke. (Elia Kazan, after seeing her Opry show, encouraged June to pursue acting. She even studied alongside James Dean with famed acting coach, Lee Strasburg, a pioneer of method acting.) Her clownish routines extended into physical comedy, and her recurring “Aunt Polly” character was a huge hit with audiences. This trait would eventually win over Johnny Cash. In the famous meet cute from Walk the Line, Reese Witherspoon captures June’s vivacious yet casual energy. Even while tangled up in Johnny Cash’s guitar strap, she continues easygoing onstage banter which engages the crowd. In real life, disappointingly, there is no evidence that June ever got stuck in a guitar strap. Carter herself said she remembers almost nothing about that first encounter with Johnny Cash “except his eyes.“

June Carter wed fellow musician, Carl Smith in 1952 and had her first child with him, a girl named Carlene. Following Carlene’s birth, June Carter toured with Elvis Presley as a backup singer. It was Elvis Presley, who was well acquainted with Cash, that first told June about the up and coming singer. In the liner notes for Love, God, Murder, Carter recalls Elvis Presley saying, “Cash don’t have to move a muscle, he just sings and stands there… ‘Oh you’ll know Cash. The whole world will know Johnny Cash.”

Johnny Cash was still married to Vivian Liberto when he met June Carter, and by that point, the couple had four daughters. June Carter was still married too, although she and Carl Smith would divorce a year later. The late 1950’s brought Johnny Cash and June Carter together again and again through various concerts and by the early 1960’s, Carter, now remarried to a police officer named Edwin Nix, was touring with Cash to sing accompaniment. As depicted in Walk the Line, she continuously rebuffed Cash’s advances during that time. Although Vivian Liberto’s 2007 memoir, I Walked the Line: My Life with Johnny, seriously challenges the narrative that Johnny Cash was the aggressor. “‘Vivian, he will be mine,’” Liberto writes, supposedly quoting a hostile interaction with June Carter. (Yikes.) You be the judge.

Johnny Cash cheated on his first wife regularly while on tour. He also started using drugs. And as Cash became addicted to barbiturates, alcohol, and amphetamines, his marriage crumbled. In Walk the Line, Ginnifer Goodwin portrays Vivian Liberto as the shrill, needy woman who cannot understand the unconventional soul of an artist. She constantly guilts John to give up the touring lifestyle — a direct opposite from the effervescent June Carter who tried to balance children with her demanding career. Johnny Cash’s daughter, Kathy, hated the movie. “My mom was basically a nonentity in the entire film except for the mad little psycho who hated his career,” Kathy Cash complained to news outlets in 2005. “She loved his career and was proud of him until he started taking drugs and stopped coming home.” Rosanne Cash, the eldest daughter, agrees that household tensions were primarily driven by their father’s habit for getting high.

That drug abuse would lead Johnny Cash to seven arrests, including the infamous takedown at the El Paso airport, which was depicted quite accurately in Walk the Line. Cash had been smuggling over 1,000 amphetamine tablets in his guitar case, returning from Mexico. However, Johnny Cash never did collapse on stage like the sweaty, slurring Joaquin Phoenix did in Walk the Line. While watching Johnny suffer, June Carter wrote “Ring of Fire.” Speaking to Rolling Stone in 2000, Carter said, “It was not a convenient time for me to fall in love with him… One morning, about four o’clock, I was driving my car just about as fast as I could… I was miserable, and it all came to me: ‘I’m falling in love with somebody I have no right to fall in love with’… I thought, ‘I can’t fall in love with this man, but it’s just like a ring of fire.’”

In 1966, Johnny Cash and Vivian Liberto officially divorced before long, he was dating June Carter. Cash claims that he quit pills the day June finally reciprocated his feelings and whether or not that’s exactly true, it’s certain that she helped him toward sobriety. Their pair recorded and released their own version of “Jackson,” which peaked at #2 on the Billboard charts in 1967. Enjoying commercial success at the start of this new relationship was nearly perfect. But now that they were finally together, getting June to accept his marriage proposal became a whole new effort for Jonny Cash. He proposed several times before eventually popping the question live, onstage, in front of 7,000 people in London, Ontario.

The moment came just after the couple completed their “Jackson” duet. Suddenly Johnny Cash was going off-script in the mic and turning to face June Carter. “Will you marry me?” he asked, and he refused to continue performing without an answer. With the pressure of high production value and an enraptured crowd, June agreed. Walk the Line exposes the tension of that moment, lingering on Reese Witherspoon’s hesitant expressions. However, photos from that night reveal a delighted June Carter, kissing and hanging on her new fiancé. My Father and The Man in Black, a documentary by Jonathon Hollif (Hollif’s father, Saul, was Cash’s manager), features a clip where June calls the proposal “beautiful” but teases Johnny still: “I wish he would have gotten down on his knees!”

Till Death Did Them Part

So, June Carter became June Carter Cash. And In 1970, she gave birth to John Carter Cash, the only child she and Johnny would have together, and their only son. He was raised in a blended family, with seven children in all, just like his father on that Arkansas farm. June and Johnny continued performing together throughout their marriage, often on television, and even helmed their own variety show, The Johnny Cash Show. The two spent the bulk of their later years at the lakefront Cash mansion in Hendersonville, Tennessee. This location features prominently in the 2003 music video for “Hurt,” Johnny Cash’s cover of the Nine Inch Nails’ achingly dark rock song. While filming, Johnny Cash’s health was failing. In the video, he reflects on mortality and examines a legacy that traces back to his boyhood roots, and up through the decades: fatherhood home movies, film appearances, countless Grammy and other record awards, a faded photograph from his wedding day in which the Man in Black stands proudly beside his bride. In two brief frames of “Hurt,” June Carter Cash appears too, standing by Johnn’s side solemnly, with her hand on his shoulder. She died three months later, at the age of 73 years old. And in the fourth months following her death, at her behest, Johnny Cash recorded sixty new songs before passing on as well. He was 71.

Watch: Johnny and June Cash’s Old Lakefront Home is Worth Every Penny of the Nearly $4M it’s Worth