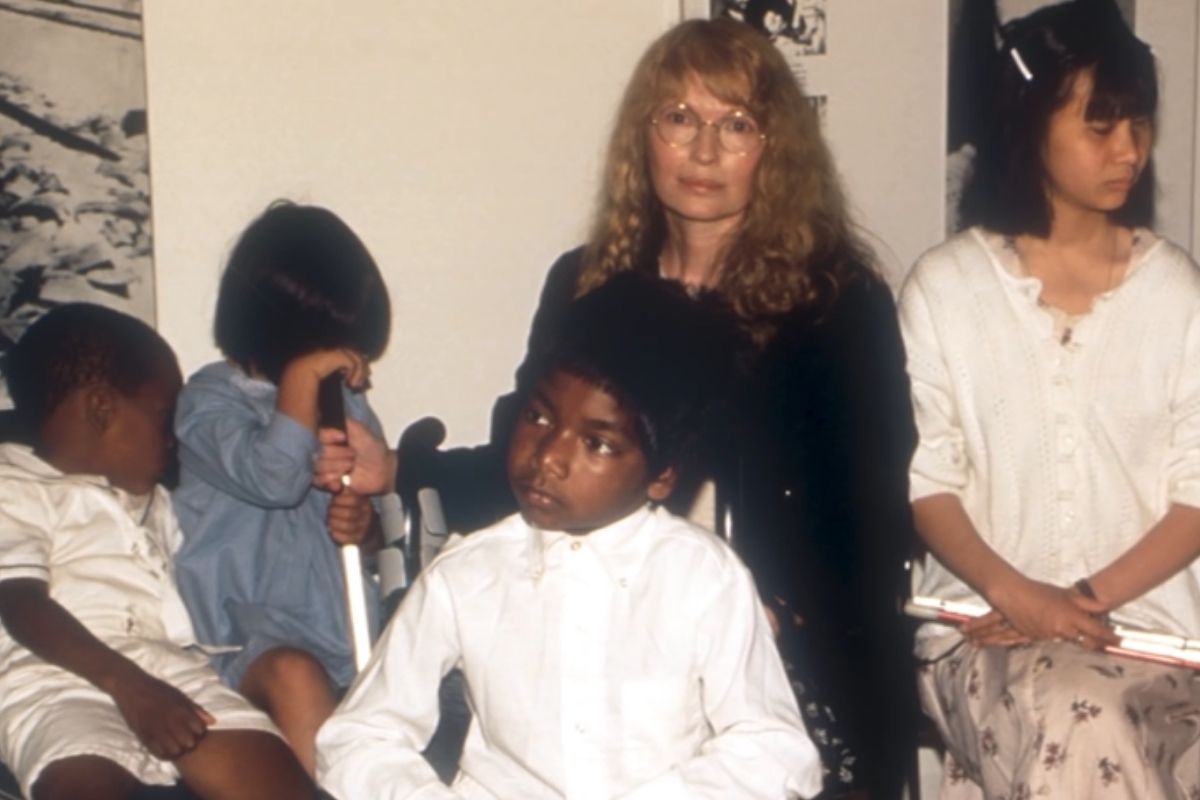 Three of actress Mia Farrow’s children are well-known to the public. Her daughter Soon-Yi Previn started a relationship with Farrow’s partner of many years, Woody Allen, as a college student and she and Allen married in 1997. Ronan Farrow is an investigative journalist who helped bring down producer Harvey Weinstein by writing about decades of sexual abuse carried out by Weinstein against many Hollywood actors.

Dylan Farrow is a writer and advocate for survivors of sexual abuse. She is one of the subjects of the 2021 documentary Allen v. Farrow, which details her accusations of childhood sexual abuse against her adoptive father, Woody Allen. All in all, however, Mia Farrow has 14 adoptive and biological children. Who are they and where are they now?

Twins Matthew and Sascha were born to Farrow and her second husband, composer Andre Previn, in 1970. Per People magazine, Matthew is a lawyer in New York City, is married to another lawyer, and has children. Sascha was a teacher and is now a stay-at-home father to his daughter. As reported by The Hollywood Reporter, both Previn twins signed a letter supporting their mother and publicly denouncing Woody Allen alongside their sister Dylan and several other siblings after Allen released a memoir in 2020.

Mia Farrow and Andre Previn adopted Lark as a baby; she was born in Vietnam in 1973. Lark died at the age of 35 on December 25, 2008, from complications of HIV/AIDS. She had two daughters. Farrow wrote about Lark in 2021: “My daughter Lark was an extraordinary woman, a wonderful daughter, sister, partner and mother to her own children. She died at 35 from complications of HIV/AIDS, which she contracted from a previous partner. Despite her illness, she lived a fruitful and loving life with her children and longtime partner.”

Fletcher was born to Farrow and Previn in 1974. He is the chief information officer at IBM and is married with two daughters. Fletcher also signed the letter denouncing Woody Allen in 2020 and took part in the documentary Allen v. Farrow.

Farrow and Previn adopted Daisy as a baby in 1976; she was born in Vietnam. She is a construction manager in New York and married with a son. She, too, signed the 2020 letter supporting Mia Farrow and denouncing Woody Allen,

A post shared by On The Red Carpet (@ontheredcarpet)

Adopted by Farrow and Previn in 1978, Soon-Yi was born in Korea in 1970. She and husband Woody Allen have two adopted children and live in New York; she is estranged from her parents. She and Allen released a statement after the premier of Allen v. Farrow, per The Hollywood Reporter: “These documentarians had no interest in the truth. Instead, they spent years surreptitiously collaborating with the Farrows and their enablers to put together a hatchet job riddled with falsehoods….As has been known for decades, these allegations are categorically false…While this shoddy hit piece may gain attention, it does not change the facts.”

After separating from Andre Previn, Farrow adopted Moses in 1980; he was born in Korea in 1978. Woody Allen adopted him in 1991. He lives in Connecticut with his family and is a licensed family therapist. Moses has spoken out in defense of his father and Soon-Yi Previn since 2014, estranging him from his mother and other siblings. He told People: “My mother drummed it into me to hate my father for tearing apart the family and sexually molesting my sister. And I hated him for her for years. I see now that this was a vengeful way to pay him back for falling in love with Soon-Yi.”

Mia Farrow adopted Dylan as a baby; she was born in Texas in 1985. Woody Allen adopted her in 1991. She first accused her father of sexually molesting her in 1992; in 2014, as reported by Elle, “she wrote a New York Times essay about that abuse, calling out Hollywood actors and asking whether they’d be so quick to celebrate Allen’s work had their own daughter been “led into an attic by him.” Her claims were given fresh attention when her brother Ronan started speaking out about them. Dylan is married and published her first novel, a YA fantasy called Hush, in 2020. It is the first book in a planned series.

Satchel Ronan O’Sullivan Farrow was born to Mia Farrow and Woody Allen in 1987. He graduated from Bard College at the age of 15 and went on to earn a law degree from Yale, worked as a UNICEF ambassador, and advised Hillary Clinton when she was Secretary of State before starting his investigative journalism career.

His latest book, Catch and Kill: Lies, Spies, and a Conspiracy to Protect Predators details his years of pursuing the allegations against Harvey Weinstein. In a 2013 interview with Vanity Fair, Mia Farrow answered “Possibly,” when asked if her first husband Frank Sinatra was actually Ronan’s biological father.

A post shared by missing kids and memorial page (@find_gods_children)

Mia Farrow adopted Isaiah as a baby the same week she adopted Tam. Per his LinkedIn page, he is a graduate of the University of Connecticut and teaches English at a private school in Bangkok, Thailand. He, too, signed the 2020 letter denouncing Woody Allen.

Quincy was adopted by Farrow in 1994 when she was one year old. She was originally named Kaeli-Shea but changed her name. Per LinkedIn, she is a phlebotomist in Connecticut. She also signed the 2020 letter supporting her mother.

Mia Farrow adopted Thaddeus in 1994; he was born in 1988 in Calcutta, India. Thaddeus was paraplegic due to polio and as of 2013, was studying to be a police officer, per People. He died of a self-inflicted gunshot wound on September 21, 2020, after being found in his car with “life-threatening illnesses.” Mia Farrow said of her son “My courageous son Thaddeus was 29 and happily living with his partner; we were all anticipating a wedding, but when the relationship abruptly ended, he took his own life.”

Frankie-Minh was born in Vietnam and adopted as a baby by Mia Farrow in 1995. Frankie-Mihn is blind. She is married with two children.

On March 31, 2021, Mia Farrow opened up about the deaths of three of her children via Twitter, addressing the “vicious rumors based on untruths” that had appeared online. She called the deaths “unspeakable tragedies” and proclaimed “any other speculation about their deaths is to dishonor their lives and the lives of their children and loved ones.”