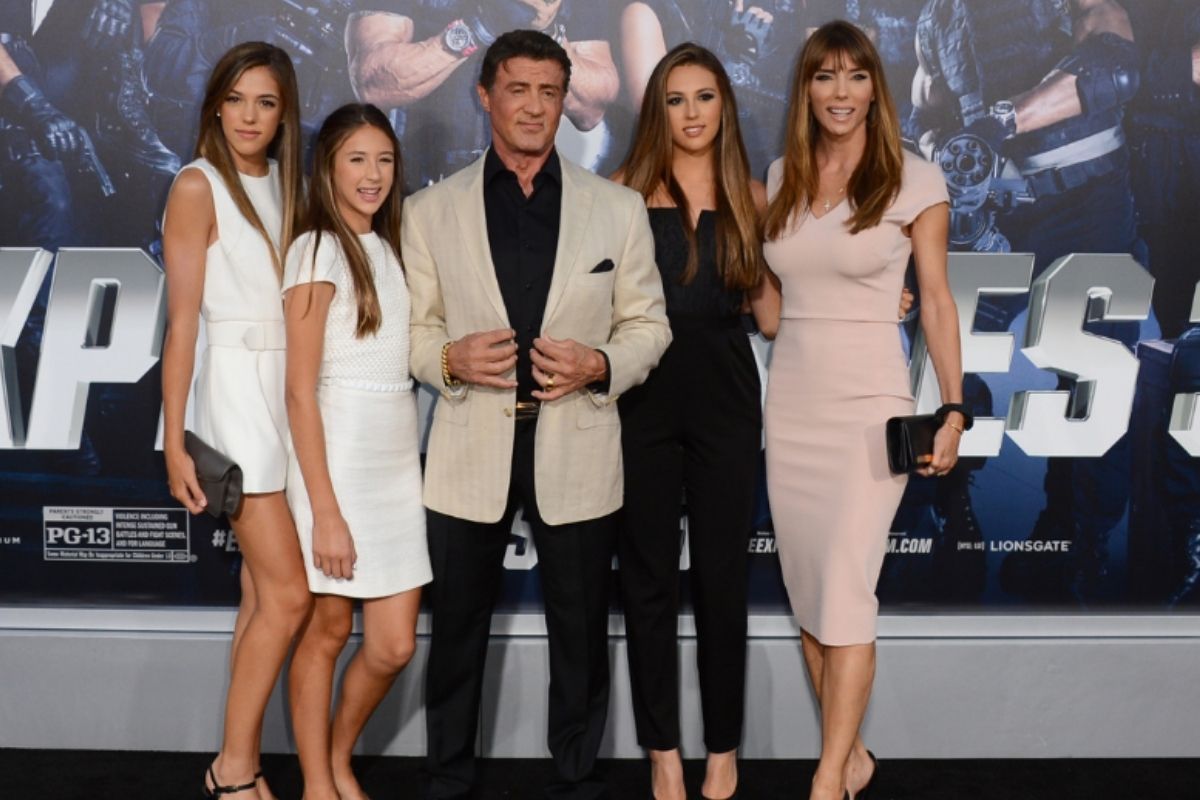 Sylvester Stallone made quite a name for himself over the years. The manhattan-born actor drew massive attention with the low-budget film that turned out to be a Hollywood box-office hit, the Rocky franchise. The film won three of the 1976’s Oscar’s and gave his career to bolster a saga of five, only one of which was not written by the actor. He continued making hits with Demolition Man, The Expendables, having co-starred next to Sandra Bullock and Wesley Snipes. The academy award-nominated actor has lived full lives on, and off-screen even fathered five children.

Sylvester Stallone was married three times. Stallone’s first wife was director and photographer, Sasha Czack. The couple had two sons together, but they were only married from 1974- 1985.

The second wife was Brigitte Nielsen, an actress, and model. After meeting the same year that he was divorced,  they were married by the end of December 1985. They were only married for two years. Between his next marriage, he dated Janice Dickinson and Angie Everhart, respectively. Then, in 1978, Stallone married model Jennifer Flavin. Stallone and Flavin, a business owner, have remained married since 1997.

Stallone’s first child was his son, Sage, with wife Sasha Czack. He was born in 1976 and was an actor and filmmaker. You may have seen him next to his father in Rocky V and Daylight. He studied at the University of North Carolina School of the Arts. He also founded his own company focused on preserving and restoring the film. Sage died in 2012 at the age of 36. The cause of death was atherosclerosis, caused by a heart attack.

Stallone spoke about the death of his son, stating, “Because when a parent loses a child, there is no greater pain,” he said at the time, according to CNN. “Therefore, I am imploring people to respect my wonderfully talented son’s memory and feel compassion for his loving mother, Sasha, because this agonizing loss will be felt for the rest of our lives. Sage was our first child and the center of our universe, and I am humbly begging for all to have my son’s memory and soul left in peace.”

As we celebrate Father’s Day today, let’s highlight Sly’s second son, Seargeoh. The younger brother of Sage Stallone, Seargeoh was born in 1979 and made it into the Rockyverse when as an infant, he was the very first “actor“ to play Rocky Junior in Rocky II. This week we celebrate the 40th Anniversary of ROCKY II – and Seargeoh will celebrate his 40th birthday in 2019. When Seargeoh was diagnosed as autistic, his parents Sly and Sasha, tried many different therapies to help their son. One of which included robotic therapy… 🤖 The Stallones’ experience with this form of therapy is what sparked the idea for the (weird) inclusion of Paulie’s robot in Rocky IV. . . #fathersday #happyfathersday #fathersday2019 #seargeohstallone #sagestallone #sico #robot #rockyii #rocky2 #rockyiv #rockyrobot #rocky4 #stallone #slystallone #sashastallone #peoplemagazine #totalrocky #autism #autistickids

Sage’s brother, Seargeoh Stallone, is the second oldest of the Stallone children. He is relatively private with his life. As a newborn, he was a feature in Rocky II. Diagnosed with autism at a young age, he has stayed out of Hollywood’s reach.

The oldest daughter, Sophia Rose Stallone, was born on August 27, 1996. The eldest daughter was born with a cardiac ailment after doctors found a hole in her heart when she was two months old. She is the first daughter between Stallone and wife Jennifer Flavin. She attended the University of Southern California graduating with a degree in Mass Communications and hopes to enter the world of fashion and beauty. To her credit, she been a judge on Project Runway and was the face of a Dolce & Gabbana campaign, along with her sister, Sistine. She has become quite an internet sensation on Twitter, YouTube, and Instagram. She has found an audience of more than 1.3 million followers on social media where she shares tips on makeup and fashion.

Twenty-one year old Sistine Rose Stallone is two years younger than Sophia and also attended the University of Southern California. She has signed to IMG Models. Along with the D&G ad campaign, Sistine Stallone has appeared in Nylon, Seventeen, and W magazine. She and her sisters all appeared in Harper’s Bazaar (Australia.) She and her sisters were Golden Globe Ambassadors at the 75th Golden Globe Awards back in January 2018. Stallone made her acting debut as Nicole in the horror fil 47 Meters Down: Uncaged, which was directed by Johannes Roberts. She is said to star as Heather in Midnight in the Switchgrass next year.

I turned 18 so now I can officially call shotgun

The youngest daughter of Stallone, Scarlet Rose, is still in high school.  She hasn’t started acting or pursuing a career in entertainment. Yet, she is often posted on her family’s social media and photographed with her sisters and father on various red carpets. She is definitely the quietest of the Stallone daughters on social media. In 2014 she had a small role as a “sassy young girl” in Reach Me, in which her father played Gerald.