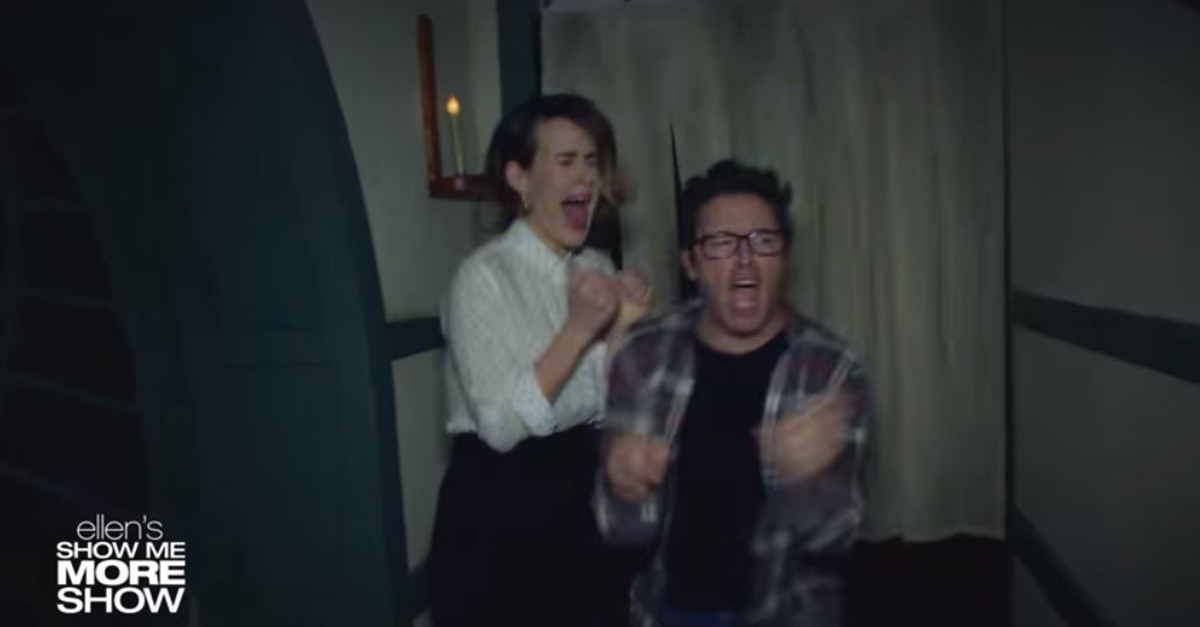 Ellen DeGeneres just gets so much joy out of toying with her producer Andy. For Halloween, the TV host sent her producer and “American Horror Story” actress Sarah Paulson (who she scared three times during a previous appearance) through the “American Horror Story: Roanoke” haunted house at Universal Studios Halloween Horror Nights in Los Angeles in 2017. The clip was later shared on DeGeneres’s YouTube series, “Ellen’s Show Me More Show” and has up to 3.9 million views!

Before walking through the maze, Paulson and Andy looked pretty terrified as they stood outside waiting to go into the house. Both Andy and Paulson tried to stall for the cameras before going in. Andy even attempted a pep talk as he has been through several haunted houses while working for DeGeneres.

“Just try and toughen up,” he said. “If you are the tough one, it makes for better TV.”

And with that, they were off. The scares started immediately with the pigman scaring them as soon as they walked into the house. When they turned a corner, a group of deranged villagers greeted them on the other side.

More screams and shrills came from the very scared victims in the haunted house as they continued their way through the maze. Andy tried to assure Paulson that things “don’t happen twice” but twice they were scared by the same actor.

“That’s not supposed to happen twice. I am going to talk to a supervisor,” he threatened.

The two made their way through another hallway of faux paintings before they started to see the light at the end of the tunnel. Again, they were scared again and Paulson threw herself to the ground.

“This is so… this is so f**ked it. This is the worst f**king thing that has ever f**king happened to me,” Paulson said as she picked herself up from the ground, laughing.

“Okay, we’re almost done,” Andy said. “I feel like we have been in here for a week.”

A few more scares and profanities to the pig man and they were finally out! Before wrapping it up, Andy and Paulson shared some harsh words for DeGeneres. “I’m not happy with you,” he said. “What do you want to say to Ellen?” “Ellen? Who the f**k is Ellen?” Paulson said.

The two vowed to come after her so DeGeneres may need to watch her back!