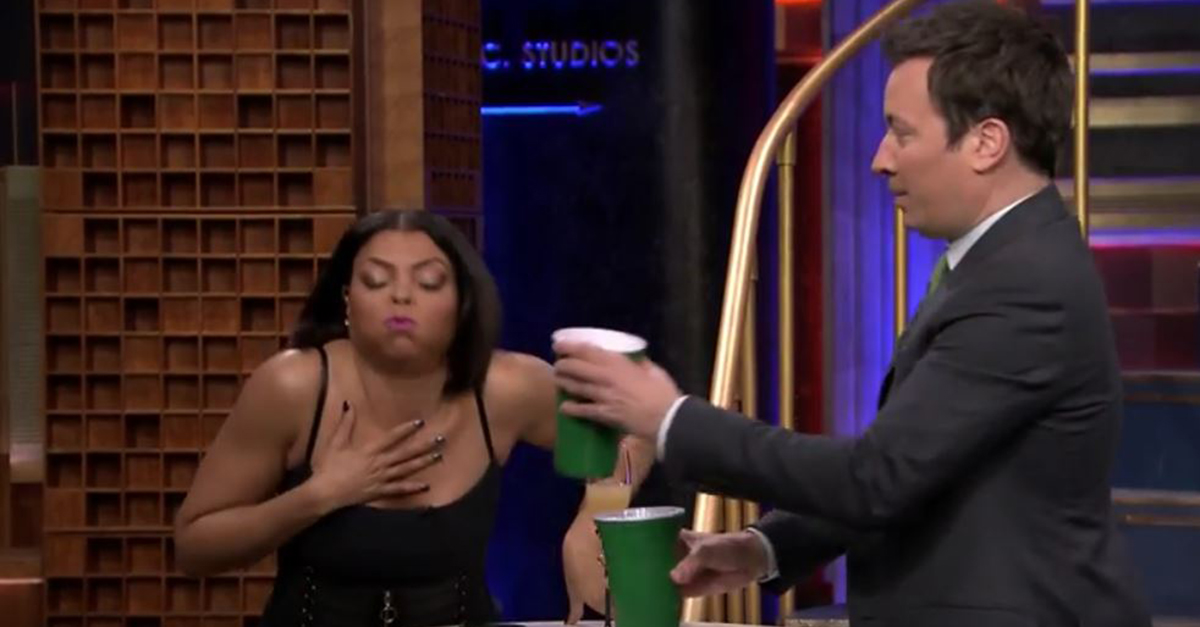 Taraji P. Henson did not get lucky on St. Patrick’s Day in 2017. The Empire star appeared on NBC‘s The Tonight Show Starring Jimmy Fallon and played a hilarious plinko-like game called “Drinko” with the host. The game required both players to walk to the top of Drinko and drop two discs into random cups with random drinks. They would then have to drink a combination of both.

After dropping her disks, Henson wound up having to drink green cabbage juice and Jameson together. Henson made the mistake of smelling the mixture before taking the shot and nearly lost her lunch! She eventually recovered and downed the disgusting beverage.

“That is going to give me gas!” she exclaimed as Fallon made his way to the top of Drinko.

Fallon wound up with an equally disgusting concoction after his disks landed in Irish Breakfast Tea and four leaf clover juice. Clearly, both players had to drink green juices that probably didn’t pair well with tea or alcohol. For the final round, both players were to race one disk into a random cup, but Henson cheated by giving herself a head start. Whoever’s disc reached a cup first would win, making the other drink the supposedly disgusting concoction.

Although the loser, Fallon was required to drink the beverage, but he didn’t mind considering what he had to drink. Henson’s disc had landed in a sweet Shamrock Shake, while Fallon’s disc landed in Irish coffee. It definitely could have been worse in playing Drinko with Taraji P. Henson, but Fallon mentioned that he probably would’ve ordered something similar later on at Mcdonald’s in honor of the green holiday.

Not a terrible ending to a game of Drinko, especially with all the green juices that could’ve been paired up with. I don’t care how healthy those green juices could be; you won’t ever catch me pairing them with anything else that doesn’t make sense. My lunch will actually be lost.

Editor’s note: This article was originally published on March 19, 2017.