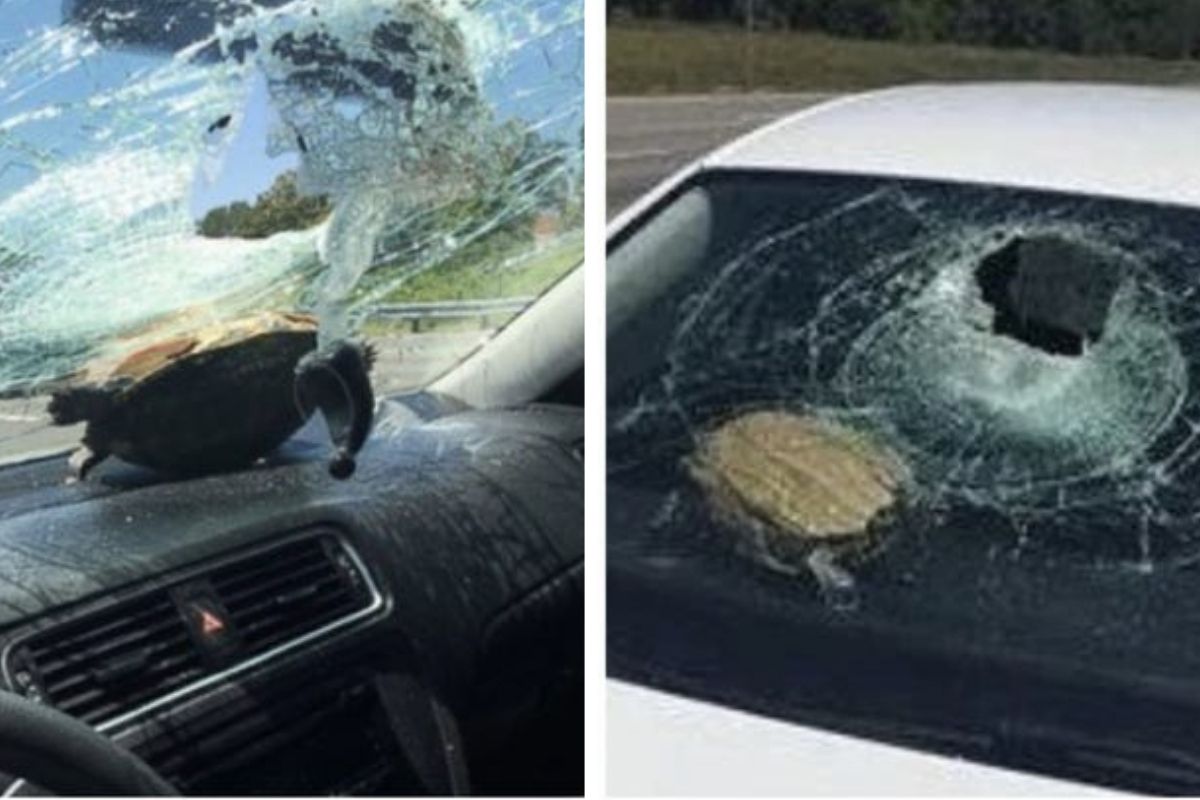 It looks like some people really do just have bad luck. A motorist near Port Oregon Florida called 911 to report a random object that has flown through her windshield and struck her elderly mother on the head. What was this object, you might ask? Oh you know, just a turtle. Yep, the driver realized that the object was not a rock, not a branch, and was definitely some sort of animal.

Luckily, the turtle apparently suffered only minor injuries and was later released into the woods by firefighters. A dispatch supervisor at the scene called the incident bizarre, saying that it was crazy for a turtle to actually go through a windshield. (Side Note; apparently this happens…and a lot.) As far as the 71-year-old woman, she’s suffered a cut above one of her eyes and was taken to Halifax Health Medical Center for treatment. Port Orange Police Officer, Andre Fleming stated, “I swear to God this lady has the worst luck of anything.”

Turtle flies through car windshield on highway and hits woman on the head https://t.co/Vsvbw3p6CS

According to the recording of the 911 call, the woman told a dispatcher that she was driving on the Florida highway near Daytona Beach on Interstate 95 when something had hit her windshield, breaking the glass, and hitting her mother who was sitting in the passenger seat. The dispatcher asked her to confirm the object, and the woman asked a man who had pulled over to help if he had seen anything in the front seat. The man can then be heard saying, “There’s a turtle in there.” To which the women can be heard saying in disbelief, “A turtle? An Actual Turtle?” LOOOOOL. I would be in disbelief too.

So yeah, indeed it was an actual Turtle. The reptile apparently suffered scratches to its shell but it was otherwise intact. Police believe that they might have been knocked into the air by another car as it was attempting to cross the road. The dispatcher had instructed the woman to use a clean and dry cloth in order to apply pressure to her mother’s wound, which apparently was bleeding profusely.

Apparently, Turtles Going Through Windshiels is an Actual Thing?

The mother did not lose consciousness and is expected to make a full recovery. Thank God for that, because that would have been a terrible way to leave this world. This is just so funny to me, you don’t really think about turtles flying into your windshield every day. I’m just glad that both parties are okay. I guess this is your reminder to make sure you look twice for turtles on the road or else go get hit by one.