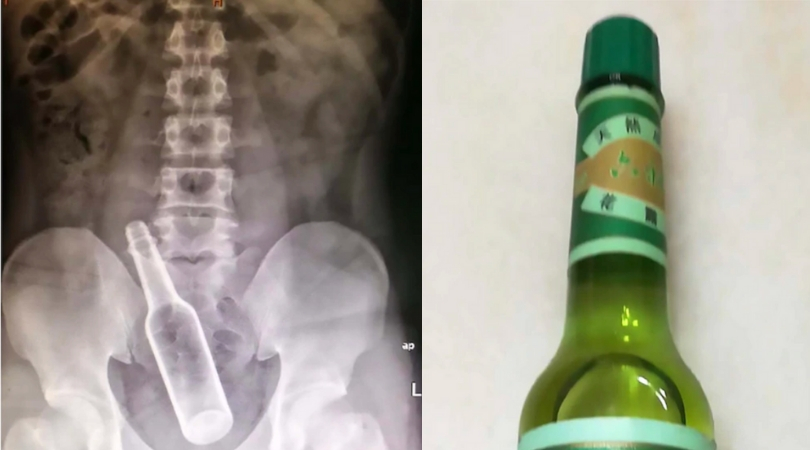 Oh, well this is one way to alleviate the itch. Turns out a man in China decided it was better to shove a 7-inch glass bottle up his butt to scratch an itch, rather than use something normal like your hand. So dumb, so reckless, and such a lame excuse. We all know what you doing sir, don’t lie.

According to medical experts, a 60-year-old man from China was left in somewhat of a predicament after the glass bottle got stuck up his bum hole while he was attempting to alleviate his itchy backside. Now I’m no expert, but as I said, there are definitely other objects that would have scratched this area far more effectively than using a glass bottle. But to each their own.

A Chinese man has had a seven-inch-long glass bottle removed from his rectum after he said he had accidentally inserted it into himself.

The patient told doctors that he was trying to use the container to scratch his itchy backside when it slipped into his body all of sudden. pic.twitter.com/v9HIWdr18q

The Chinese man quickly went to Dongguan Hospital of Traditional Chinese and Western Medicine where he was complaining of abdominal discomfort. After doctors took an x-ray, they saw the bottle was lodged approximately two inches inside the opening of the man’s anus. The doctor stated it was a bottle of Florida Water cologne, which at its thickest point measures seven inches long and two inches in width. Usually, Florida Water is used among thing as perfume, insect repellent, or hand sanitizer. I know, this stuff is wild.

According to Dr. Lin Jun, the facility head gastroenterologist, “The patient told me: ‘My abdomen hurts. There’s something inside. I can’t poop or fart.’ The entire glass bottle was inside his rectum. I could feel the bottle under his abdomen. He said his anus was itching. He said: ‘I was very uncomfortable, so I bought a bottle of Florida Water and began scratching the itch. Then the bottle accidentally went up my rectum.”

He quickly arranged surgery for the man, and the bottle was successfully removed from the patient’s rectum. Thankfully, this hilarious yet reckless man is not expected to suffer any long-term effects as a result of his “misadventure.” Someone definitely needs to buy this man a beer or two, and remind him that maybe sticking glass bottles up your butt isn’t the best idea.

But, apparently, this isn’t the first time a Chinese hospital had to remove a bottle of Florida water from a patient’s rectum. Back in August, Zhumadian Traditional Chinese Medicine Hospital treated a man for similar conditions, after a patient had a  ‘Liu Shen’-branded cologne up his butt. Doctors were able to remove the bottle by physically reaching into the man’s rectum during surgery and tying a metal wire around its center before pulling it out.

In June 2018, Chinese doctors also retrieved a bottle of Liu Shen Florida Water from another patient’s rectum. Lastly, in February, Medics at Dongguan’s Donghua Hospital removed a 3.5-inch wide glass sphere from a 31-year-old man who had inserted it up his own butt as well.

Hey China, y’all are wild. Some of you didn’t get enough sex education classes, and this definitely shows. Stop putting foreign objects up your butt, people.

This article was originally published on January 2, 2020.