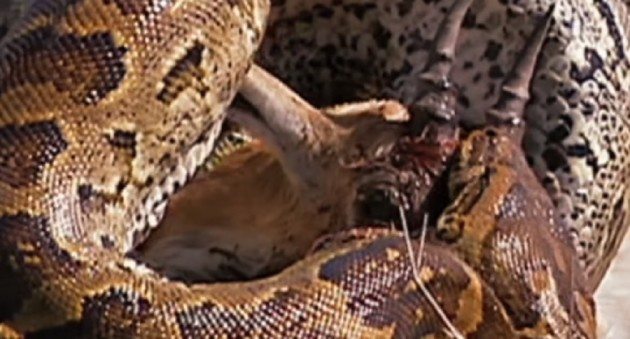 These photos and video prove snakes will try to eat anything!

Snakes are some of the most opportunistic predators on earth and with more people carrying cameras in their phones than ever before, it’s not uncommon to see photos and video emerge of snakes chowing down (or at least attempting to eat) some pretty gnarly things.

With that in mind, here are some of the best photos and video of snakes eating or at least attempting to eat absolutely outrageous things we’ve come across in recent years.

Who knew snakes like to go fishing, too? I’m not even sure how this snake managed to grab this catfish that seems way too large to eat. The two flop around and struggle for a while before the video cuts. I’m curious how this one eventually ended. I guess we’ll never know if the snake got his fish dinner or not.

Australia is a dangerous place and just because you’re a large mammal doesn’t mean you’re immune from ending up at the bottom of the food chain. That’s perfectly illustrated here in a series of photos of a python swallowing up a wallaby who was unable to use those powerful legs to simply jump away!

I so badly want to visit Australia someday, but I also feel like I’ll never be safe if I go out in the outback with all the things that can kill you out there!

Ok, so an egg isn’t exactly an odd thing for a snake to eat. Many snakes subsist on them. But I put this on the list just because of how amazing it is when one does eat an egg. This short video shows how they are able to tackle food items many times larger than themselves.

This may also help explain why snakes sometimes get into trouble when they attempt eating something that’s just a bit too large.

Don’t watch this one during lunch however, the part where it spits the eggshell back up is pretty gross!

This one is pretty crazy as this snake tried to eat a really big centipede but the centipede eventually killed the snake by eating it from the inside out! The two creatures were found dead so it’s not known exactly how this all went down, but that had to be a very painful death for this viper!

Snakes are notorious cannibals and won’t waste an opportunity to eat one of their own. This video of a king cobra eating a spitting cobra shows two of the more deadly species you could encounter in a life-and-death struggle.

The king cobra wins this battle and enjoys his victim as dinner, but the spitting cobra doesn’t go down without one heck of a fight first!

When talking about snakes eating crazy things, the big boys of the snake world, the pythons, anacondas and boas will come up time and time again. This African rock python shows just what a big snake is capable of when it chows down on a springbok antelope. This antelope may be the python’s only meal all year. How crazy is that?

It’s pretty amazing to watch as it swallows the antelope up, horns and all!

This is one of the most famous “snake eats outrageous thing” incidents around. The images of an alligator protruding out of the side of a Burmese python in the Florida Everglades are the stuff of internet legend at this point.

No one knows exactly why the snake split open since the animals weren’t found until long after both were dead. It had to be one hell of a struggle though since both ended up dead. Perhaps the reason this incident is so legendary is because the mystery involved in it.

While the python eating an alligator turned out badly for both animals, more recently photos and video have emerged of a python successfully eating a similar animal in a crocodile. This incident happened in Queensland, Australia and understandably stunned onlookers who were present. It took five hours for this epic struggle to end.

The great photos of the python swallowing the last of the croc’s tail perfectly demonstrate just how big a prey item a snake can consume!

Kruger National Park in South Africa is well-known for its awesome wildlife viewing opportunities. There are constantly awesome photos and video coming out of Kruger. Back in January, photographer Sheila Grobbelaar caught some awesome ones of a python swallowing an impala whole.

It took the big snake just 10 minutes to do it too!

Finally, perhaps one of the most bizarre things a snake could possibly try and eat….itself! This really makes you wonder just what this animal was thinking. What a weird situation!

As you can see, snakes are pretty amazing creatures. I know a lot of people have a fear of them, but I just find them fascinating. It’s amazing how adaptable they are and the variety of prey items they target is seemingly endless.

These are all pretty awesome examples of the feeding habits of snakes, but I’m excited to see what awesome new photos or video will go viral next. You just never know what a snake is going to eat!