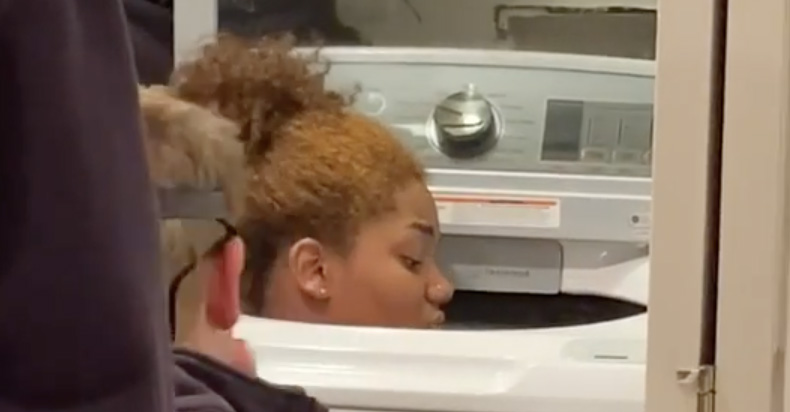 Firefighters in Prince William County, Virginia were called to a home because one resident’s cabin fever manifested itself into a (comical) emergency. A kid got stuck in a washing machine playing hide and seek.

Amari Dancy of Woodbridge, Virginia was trying to amuse herself and fight off social distancing boredom so she decided to play hide and seek with her younger cousins. Turns out Amari is real good at hide and seek. Too good, in fact.

Well, they’d be sort of right if they thought that. Turns out Amari couldn’t get out of the washing machine. So the fire department had to be called but thankfully the firefighters didn’t have to take an ax or the jaws of life to what appears to be a pretty new, and pretty nice, washing machine. (It’s all fun and games until you’re paying 500 bucks because your stir-crazy niece got herself wedged in your expensive home appliance and the local government had to rip it apart to get her out.)

Amari’s aunt, at least, had a good sense of humor about the incident. She was the one who filmed it and posted it to Instagram, along with a series of hysterical pictures. She can be heard in the video, from behind the camera, saying, “Kids will be kids” and laughing when one of the firefighters asks Amari, “Did you win?”

(I highly recommend watching every video in this post.)

Amari had a good sense of humor about it too, tweeting the following.

Some people might think Amari was being dumb or foolish, but, really, she was willing to do anything to win. Michael Jordan used to punch his teammates in the face and we’re all like, “WOW! What a competitor.” So here’s a hearty salute to Amari, the world’s most dedicated hide and seek player.

Watch: 5-Year-Old Ingeniously Pranks His Mom on Facetime to Get out of Homeschooling