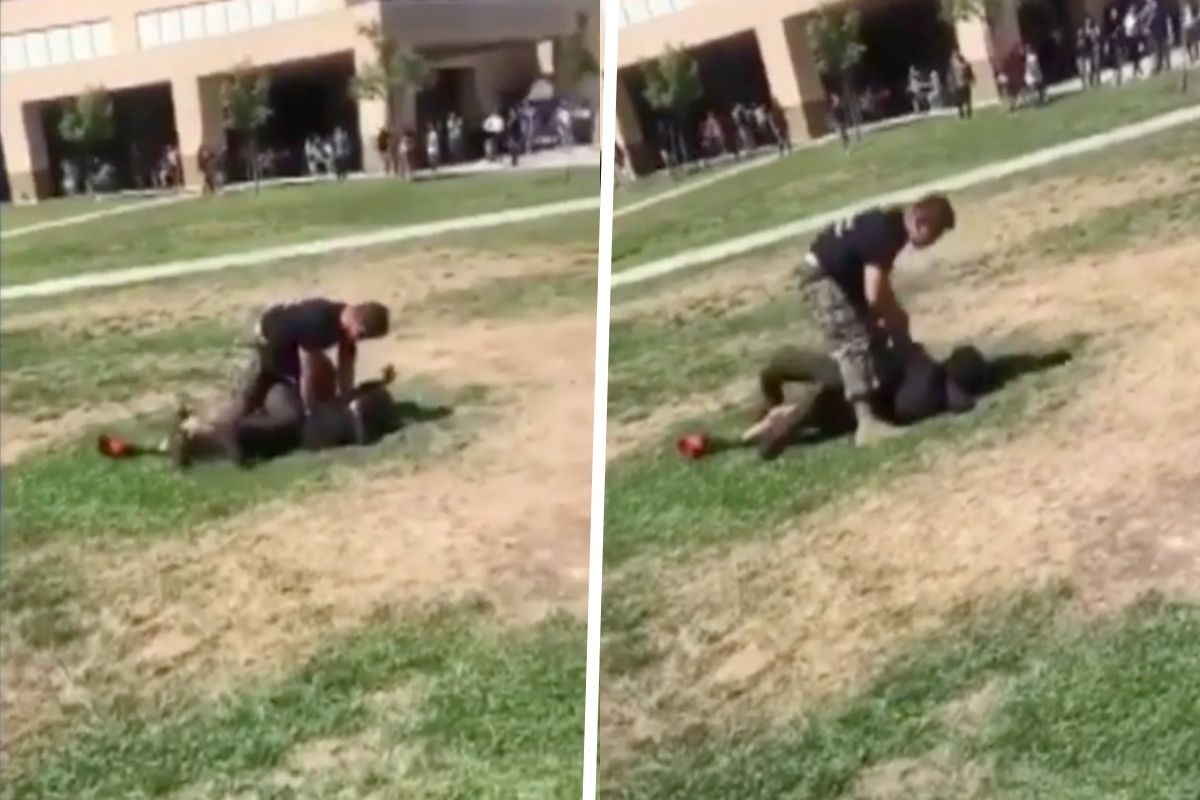 What do you do when two high school students are throwing punches left and right over a vape pen while others stare in awe? You tackle them to the ground, duh. Well, at least that’s what this Marine decided to do. Luckily for us, it was all captured on video. The viral video shows two students at Edison High School in Stockton, California fighting it out, before the Marine, identified as 18-year-old Josue Valdez Sarmiento is seen making his best sonic impression and knocks the boys back to where they came from. Talk about an unexpected end, maybe he should consider going into the NFL?

The video has since gained a heavy amount of views on social media, because well, it’s truly impressive. This man literally tackles the boys to the ground without any remorse whatsoever. Excessive? Yeah sure, I can see what it was a bit excessive. But, this man just wanted them to stop before they caused any serious damage.

Marine Tackles Student to The Ground

The Marine is seen holding down the students before attempting to calm them down. One of the students is picked up by an adult, while the other is seen lying on the ground after being tackled, probably in quite a bit of a pain because that tackle was BRUTAL. The school district said they are aware of the incident and are currently investigating the situation.

According to the U.S. Marine Corps, Valdez Sarmiento is a recent graduate of Edison High School and was on campus to help with military recruitment, but is not a recruiter just yet. Defending his actions, Maj. Thomas Driscoll said the boy was simply trying to break off a dangerous fight the best way he could. He stated, ?He saw a dangerous fight break out. Upon observing that situation, he moved over and broke up the fight. Although, the manner in which he did [could] have been improved, we are proud of Pfc. Valdez Sarmiento for his decision to intervene.”

Was the Tackle too Much?

The parents that think this was wrong are part of the problem. A big part.

The 18-year-old has received counseling and has been released to office dudes. As far as the other two rascals, it is believed they had been fighting for “over a minute” uninterrupted but there is still no word about their condition or punishment. Still, people obviously had mixed feelings about how the Marine broke off the fight because well, it was a literal tackle.

He could have probably just talked them down using his words, but if you look closely, these kids are going at it. Words would have not helped. Plus, no one was even attempting to split up the fight. Personally, I think what he did was okay, he stopped it the best way he thought he could. That’s just me though. I bet these parents can’t wait to file some sort of lawsuit around this kid.

What do you think? Was it too excessive?

Editors note: This article was originally published on September 16, 2019.