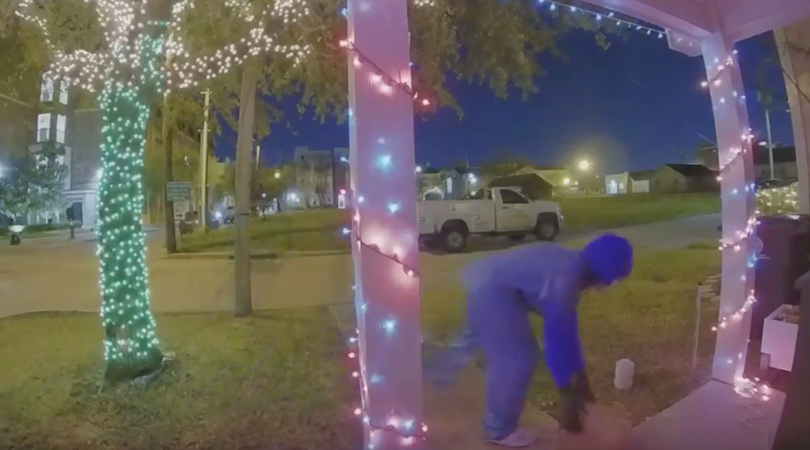 Package thieves are, for the most part, trash people. The best thing I can say about porch pirates — a name too cool for them to even deserve — is that at least they aren’t mugging anyone, I guess. Other than that, they are pests. And it’s not even like they’re necessarily stealing from people who can afford to just order another hundred dollar Christmas present for their wife or kids, or what have you. They steal primarily from people who aren’t exactly swimming in money, even if they aren’t exactly broke either.

So seeing this video from a Houston, Texas man’s Nest camera that shows his non-violent booby trap working to perfection brings me joy. This package thief got exactly what he deserved: a good scare and hopefully some ruined pants too.

Back in December, Midtown resident Matt Pratt planted a booby-trapped package on his front porch. He rigged the empty box with a blank shell for a 12-gauge shotgun embedded inside because, according to a Facebook post by Pratt, he had several packages stolen off his porch recently and wanted to teach the porch thieves a lesson. As the video from his Nest security camera shows, his bait package worked perfectly. The porch thief nonchalantly walks up to the fake package, bends over thinking he has a score, and then BOOM — the random explosion from the decoy package scares him off.

This is solid. Other good ways to punish these cowardly package thieves include: a glitter bomb trap, some sort of stink bomb or fart spray that shoots out when they go for the package, and maybe some sort of Home Alone-esque paint can situation that just drills the bastards in the face. Or the flamethrower Kevin McCallister rigged on the backdoor. Whatever. I don’t care. Light these guys on fire.

Watch: WHAT HAPPENS WHEN A SHOTGUN SHELL EXPLODES OUTSIDE A GUN?