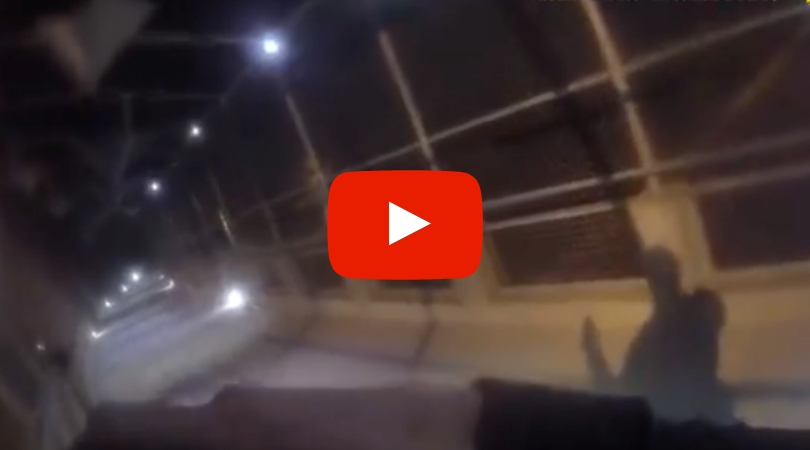 An emotional video was released by Chandler Police department in Arizona, showing a heartfelt and devastating moment between a police officer and a man attempting to commit suicide by jumping off an overpass. The footage shows a 26-year-old man holding on to the protective fence of a pedestrian bridge over Highway 101 southwest of Phoenix.

Dramatic body camera footage shows Officer Aaron Little talking to the man, begging him to climb back over the railing. You can clearly hear the distress in the officer’s voice, as he urges the man not to jump, repeating, “I’ll hug you man. I don’t care. I just want to talk to you. I swear.”

A few minutes later, Officer Little convinces the suicidal man that he is only there to help him, and the 26-year-old climbs back onto the bridge to get an embrace. The man quickly walks to the officer and hugs him, crying heavily during their embrace. According to an expert with Empact Suicide Prevention Center, the officer’s calm and casual demeanor were key in not escalating the situation. Erica Chestnut Ramirez, Director of ESCPC stated, “Being sympathetic, non-judgmental, calm, so the fact that the officer didn’t seem shocked by what the individual was doing, and maintained his distance from him.”

I can only imagine how scared the Chandler police officer must have been. He saved a life that day, and he should be proud of that, knowing that he was trained for moments like these. It’s truly amazing. I guess this just goes to show you that sometimes we all need a hug here and there, and despite the situation, people can help. Remember that whatever you are going through, you’re not alone, and things will get better. It may not seem like it at that moment, but you can work through it. If you or anyone you know might be thinking of suicide, you can call the National Suicide Prevention Line which provides free confidential support at 1-800-273-8255.