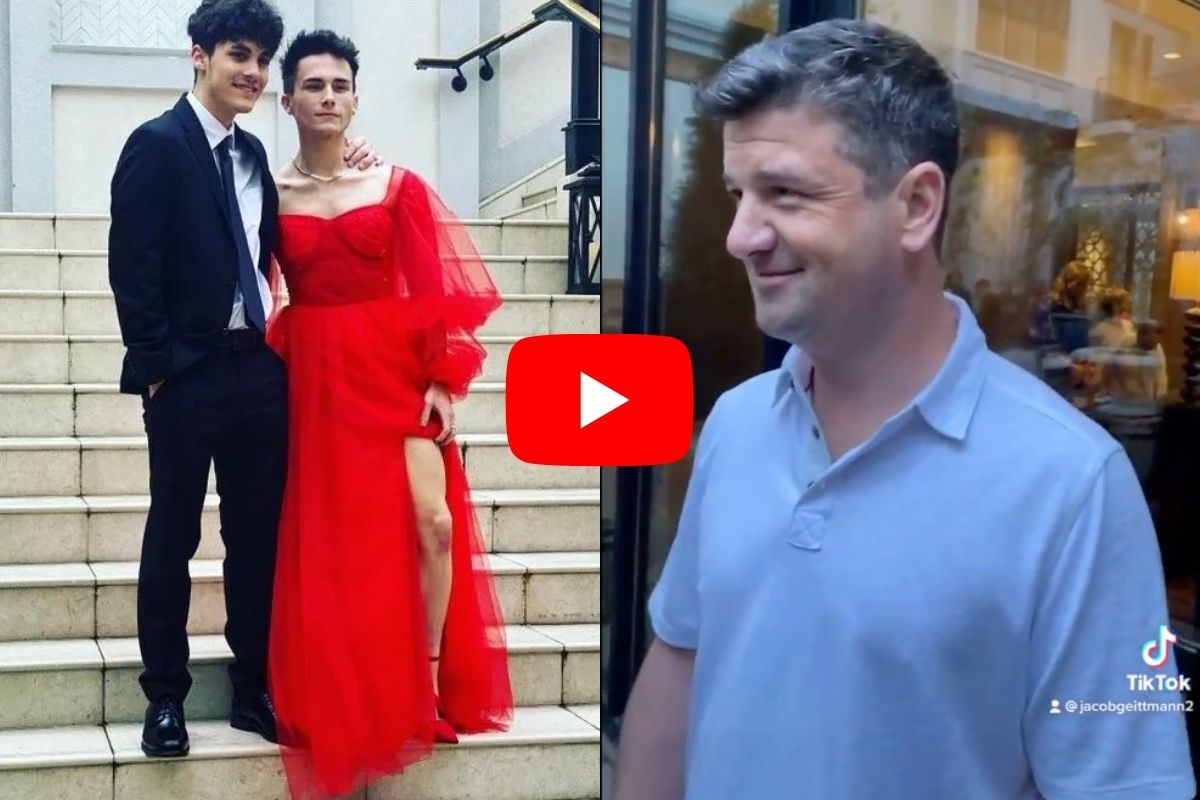 The CEO of the telemedicine company VisuWell, Sam Johnson, was fired after harassing a local Tennessee teen over his choice to wear a prom dress. Cell phone footage of the confrontation quickly went viral on social media, resulting in an outpouring of public support for Dalton Stevens, the 18-year-old seen here in a fabulous, floor-length red dress.

Dalton Stevens, a teenage boy from Franklin, Tennessee, was excited to attend prom with his boyfriend Jacob Geittman. Stevens, who is a high school senior, even prom-posed to Geittman, who supported his plans to wear a dress. Speaking to the Nashville news station WKRN, Geittman described his reaction simply: ” ‘I’m like okay! You’re going to look good in it!’ ” Stevens chose a ravishing red dress, the kind that would have been a show-stopper on just about anyone. But the romance and magic of their senior prom night was cut dramatically short.

The Franklin High School prom was held at the Harpeth Hotel and in the lobby, a grown man approached the couple to blatantly harass Stevens over his fashion choice. Stevens’ boyfriend recorded the clash and posted it on TikTok. The video shows Geittman loudly defending his date while Stevens fights back as well, challenging this random man who came to rain on his parade. Though not all of the man’s insults are apparent in the video, his homophobic rant included insults like “disgusting, “ridiculous,” “You look like an idiot,” and “Men shouldn’t be wearing this” according to Heavy Magazine.

On WKRN, Stevens explained that at the moment, “I was very confident. I knew that I felt beautiful, and I felt great.” This is no surprise considering Stevens seems extremely comfortable with his identity. During the interview, he added that “I very much view clothes as genderless.”

Thanks to the viral video — which was even shared by Kathy Griffin and Billy Porter — the man was identified as Visuwell CEO Sam Johnson.

If this is Sam Johnson in Nashville, Tennessee, the CEO of @VisuWell, healthcare-tech-growth strategist, married to Jill Johnson where they may reside in Franklin, Tennessee, it seems like he’s dying to be online famous. 🤷‍♀️🏳️‍🌈🤷‍♀️ https://t.co/GPYOYBQywv

This story is particularly breaking news during this pandemic year, as Visuwell is a telemedicine company — a remote field that has grown dramatically due to Coronavirus restrictions. VisuWell services over 300 hospitals. According to Newsweek, Johnson has denied the accusations. But the proof is in the pictures and on Monday night, Johnson was terminated from the company. VisuWell released this statement:

“We unequivocally condemn the behavior exhibited by Sam Johnson in a recent video widely circulated on social media. After investigating the matter and speaking to individuals involved, the VisuWell Board of Directors has chosen to terminate Mr. Johnson from his position as CEO, effective immediately. Gerry Andrady, our President and COO, will lead the company through this important time.

VisuWell’s culture emphasizes respect, kindness, and compassion, especially for those from traditionally marginalized communities, and we maintain a zero-tolerance policy for intolerance of any kind. Mr. Johnson’s actions contradicted the high standards we set for ourselves in promoting the health of those who use our platform.

We share the concerns that so many have expressed on this matter and look forward to announcing concrete steps we are taking in support of the LGBTQ community in particular over the coming weeks.”