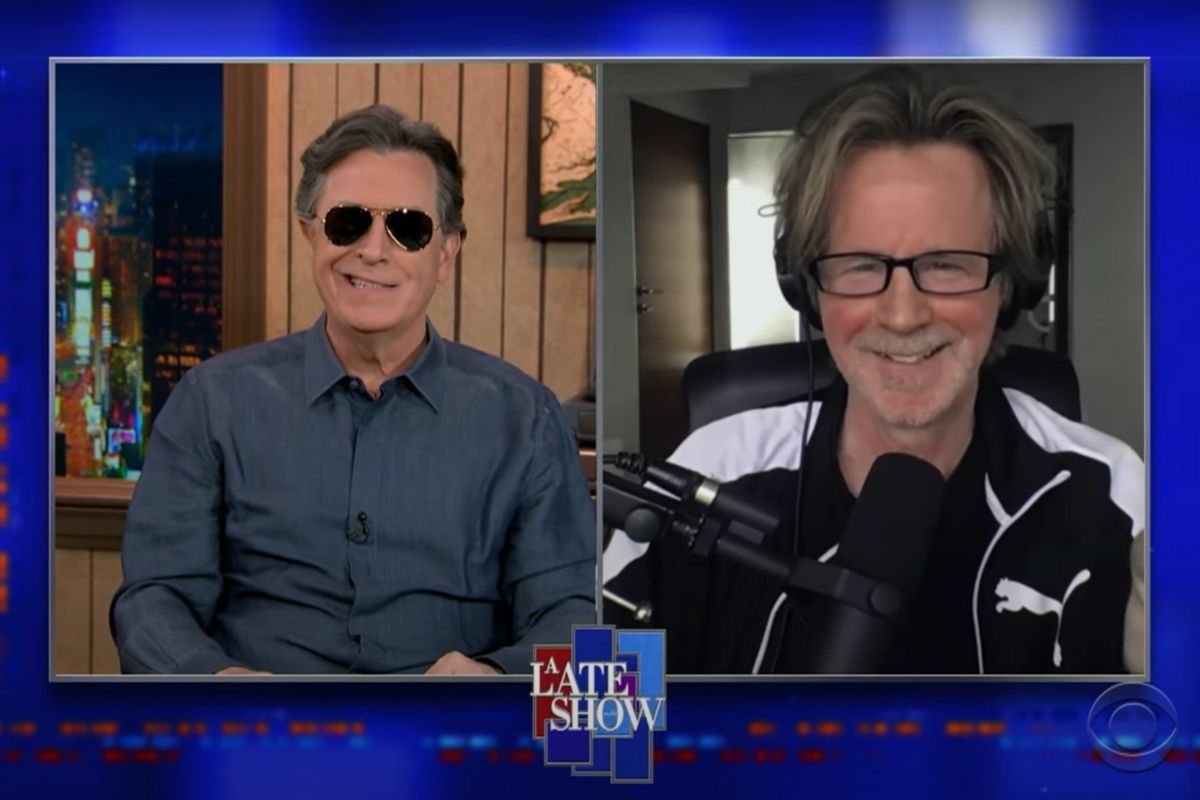 Dana Carvey, the master of impersonations, visited his old friend Stephen Colbert on The Late Show last Tuesday night… and performed, live, a killer Joe Biden impression that put the countless Saturday Night Live attempts to shame. He also did a Dr. Anthony Fauci impression, which skewed heavily Italian. Not totally accurate, but funny all the same.

Dana Carvey appeared on CBS’ The Late Show to promote his new Spotify podcast, Fantastic!, which has an awesome premise: just Carvey doing impersonations. The format allows for unrelated celebs — like Prince Harry, Anthony Fauci, Jeff Bridges, Donald Trump, and Johnny Carson, to name a few — to interact in random, imagined conversations. It’s an ambitious set-up that seems like no challenge for Carvey, the longtime impressionist who’s starred in Wayne’s World, The Master of Disguise, The Dana Carvey Show, and as an SNL cast member for seven years. Fantastic! provides a fresh opportunity for Carvey to flex that unique and culturally attune skill.

Carvey finds inspiration all around. (Little known fact: he actually crafted his iconic Garth Algar character off of his own brother, a real-life awkward tech savant.) And with Colbert, he discussed certain aspects of his technique including “funny with the sound off,” a concept that garners laughs without waiting for a punchline. The classic example? Lucy and Ethel shoving chocolates into their blouses off the conveyor belt in I Love Lucy. But on his new podcast, the audio medium requires Carvey to rely solely on sound.

Lucky for Carvey (and us), he’s adept at not only speaking in character but also at choosing exactly what to say. In the clip above, you’ll get a taste of his ornery Barack Obama, followed by Paul McCartney and Dr. Fauci heatedly discussing the Coronavirus vaccine. Dana Carvey’s Dr. Fauci definitely borders on Goodfellas fantasy but it’s still funny imagining the New York scientist’s rapid 5-foot-4 fury. The exaggeration works thanks to the specificity of the lines. Improvising such detailed material, Carvey can turn the mumbo-jumbo of our current pandemic world — spike proteins and quarantine blues — into a solid bit that manages to include a lengthy Beatlemania throwback. (Both his Paul and Ringo are excellent.)

Immediately following Dana Carvey’s appearance on The Late Show, his impression of President Joe Biden (which begins at 6:35) was trending on social media. And it’s easy to see why. As Stephen Colbert admits, capturing Biden is tough. But Carvey explains that he prefers honing in on the “gentle father” tone of Biden during a CNN town hall. Hilariously, Carvey says that he imagines the president addressing the nation like the peaceful alien emerging from the spaceship at the end of Close Encounters of the Third Kind. That surprising connection, I think, emphasizes the mutual wonder of a Biden press conference as the politician stumbles happily through his speeches, Americans tensely observant.

Carvey captures that pattern effortlessly, devolving into something like free-form poetry as he transforms Biden-esque non-sequiturs into succinctly rhythmic repetition. Names like Bob Woodward somersault into “Bob Redford,” familiar buzzwords popping up all the while: “Scranton,” “my dad,” “Barack,” and “in fact.” As Carvey points out, the 78-year-old is “a little confused sometimes” but there’s a sincerity there — one which the comedian can clearly tap into.

An SNL alum himself, Dana Carvey’s earnest Biden puts the past attempts by Alex Moffat, Jason Sudekis, Woody Harrelson, and yes, even Jim Carrey to shame.