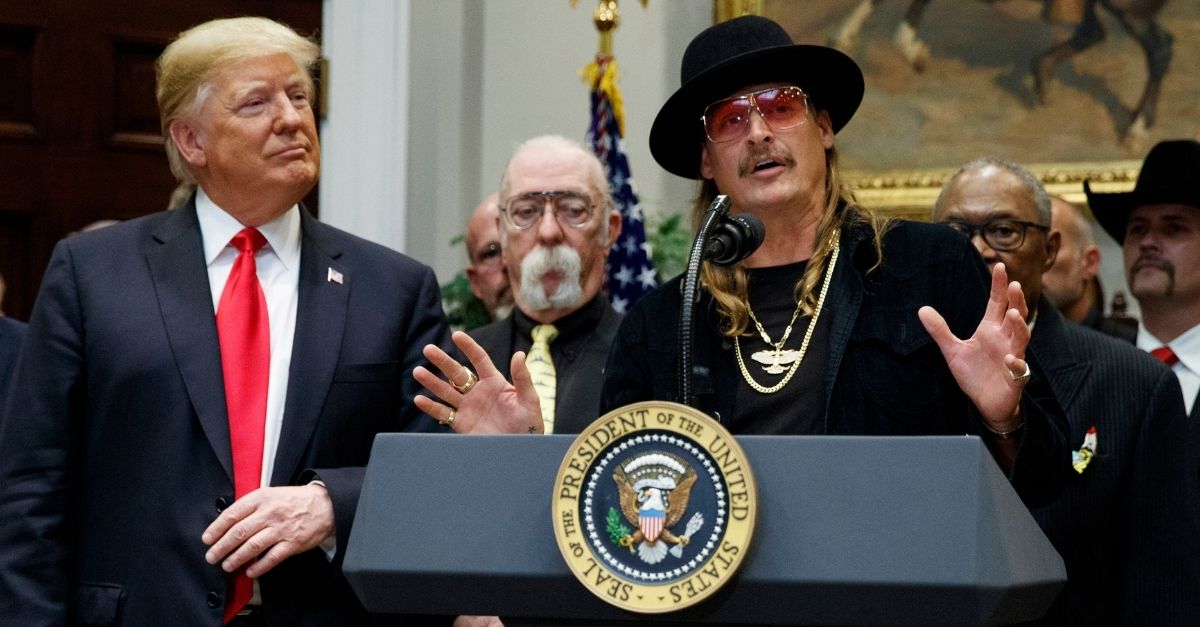 Kid Rock has made it official and announced that he is in favor of President Donald Trump, once again. The Rockstar headlined a campaign rally for President Trump in his home state of Michigan. The musician, whose real name is Robert James Ritchie grew up in northern Macomb County, Michigan. He appeared alongside the Commander in Chief’s son Donald Trump Jr. and his girlfriend Kimberly Guilfoyle. Guilfoyle is also Trump Campaign Senior Adviser in Harrison Charter Township Michigan for the Make America Great Again event.

The doors of the MAGA event opened at 6 p.m. and the festivities began at 7. The news of the event comes as the Trump Campaign has begun making more public events, which were paused for at least 6 months due to the coronavirus pandemic which turned the election into a digital operation. Just last week, Trump held another President’s reelection campaign in Freeland Michigan, which was attended by thousands of people. President Donald Trump won the state by a thin margin of 10,704 votes in 2016 against Hillary Clinton and is hoping for a resounding victory this time around.

It's going to be a fun one in Michigan today with @KidRock and @kimguilfoyle!

The 49-year-old rock star has been a long supporter of the Commander-in-Chief and endorsed him back in 2016. The singer also appeared with Trump Jr. at a campaign rally ahead of the 2018 midterms and supported Michigan Senate candidate John James. Rock met with Trump when he signed the Orrin G. Hatch-Bob Goodlatte Music Modernization Act. He was recorded telling Trump, ?There?s a whole lot of people in this country that do give you a lot of credit for everything you?ve been doing for this country. We know that some people don?t give it to you as much as maybe they should sometimes.?

The event marks the third time in a week that the presidential candidates or top representatives attend a campaign event in Michigan. A fourth event is planned when Democrat Joe Biden?s wife, Dr. Jill Biden, makes a stop tomorrow in west Michigan. The Kid Rock/Donald Trump rally is free general admission for all, but people are asked to register. Only two tickets per mobile number are permitted and all tickers are first come first serve basis.