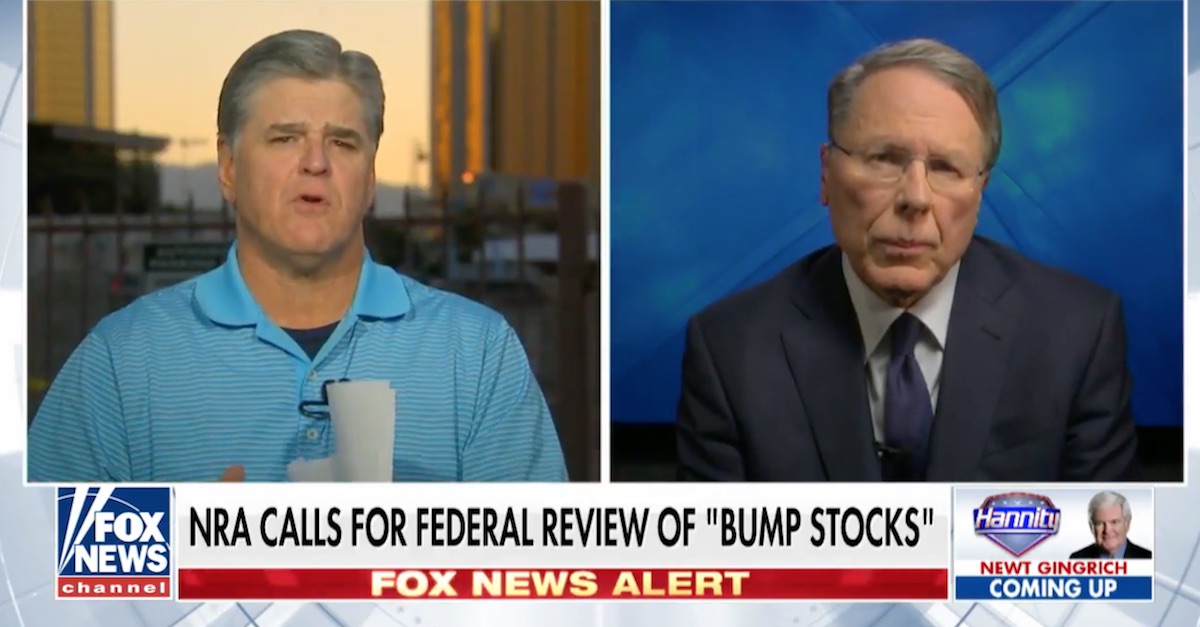 NRA executive vice president and CEO Wayne LaPierre went on Sean Hannity’s show Thursday night to defend his organization, which has been blamed by many for the massacre of 58 in Las Vegas last Sunday night, and to call out Hollywood “hypocrisy” on the issue.

Some of the blame has been conventional in the form of calls for gun control, but the critiques have also been extreme. For instance, Nancy Sinatra went so far as to say NRA members should be executed by firing squad.

That was a new one.

But, LaPierre was mainly making the appearance to address the bump stock used by mass murderer Stephen Paddock. Earlier Thursday, the NRA said in a statement that it too wanted to know if the device complied with federal law. The bump stock makes a semi-automatic weapon fire fast enough to simulate an automatic.

LaPierre said additional regulation could be in order here but emphasized that he did not use the words confiscate or ban.

After this, he shifted his focus to Hollywood “elites” who “every single day, [are] teaching gun irresponsibility to the American public.”

?This Hollywood crowd makes billions a year, every single day, teaching gun irresponsibility to the American public. The hypocrisy is beyond belief,” he said.” They criticize me for saying people ought to be able to protect themselves from murders, rapists, and robbers, and then they make billions depicting every night those same situations.”

“The hypocrisy coming out of Hollywood is beyond belief. The American public doesn?t buy into it,” he added, noting that Hollywood stars travel with security armed with guns.