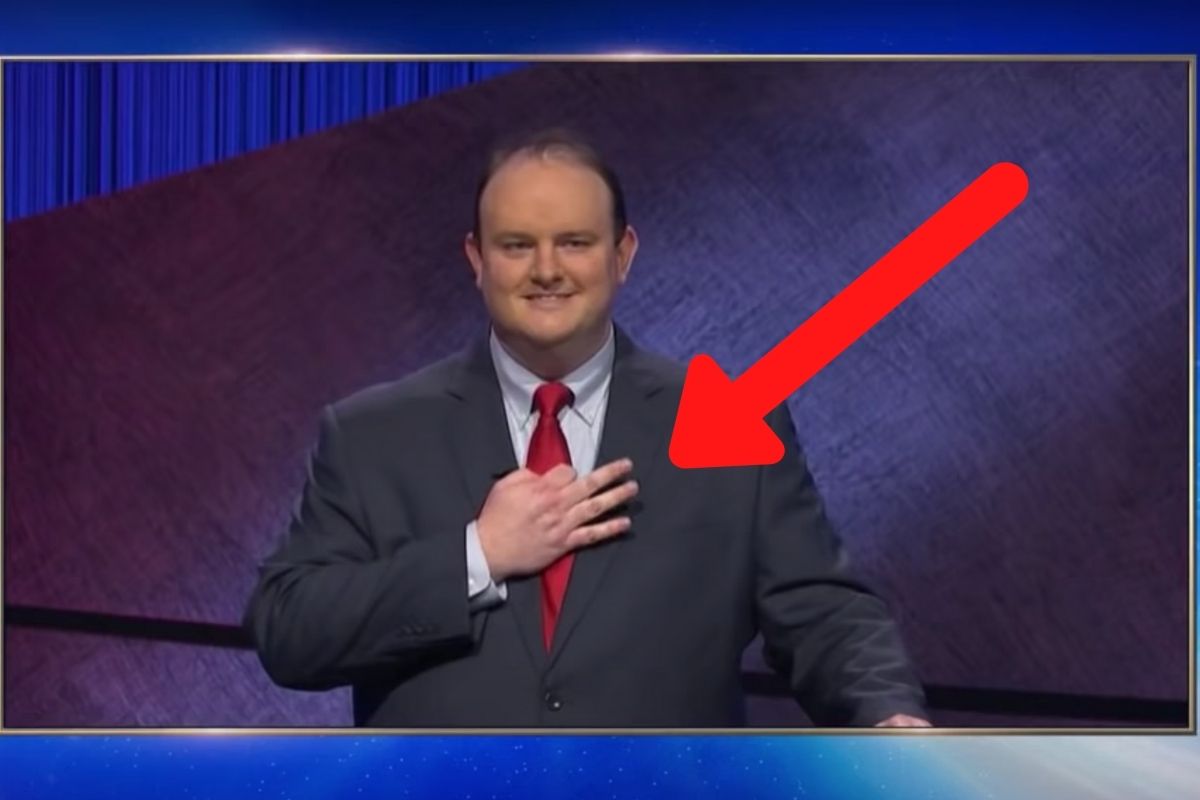 Every since the death of Alex Trebek, Jeopardy! has been stirring up controversy. From the outrage over Dr. Oz’s stint as host to that Final Jeopardy Aaron Rodgers pown to this NBA fail to the initial snub of LeVar Burton (followed by a petition which earned the Reading Rainbow legend his own chance to guest host), the 37th season has been newsworthy to say the least. And now, after so much hosting drama, it’s a contestant that’s trending — for allegedly flashing a white supremacist hand symbol during Tuesday night’s episode.

Now, there’s an online petition for the show to acknowledge this issue and condemn the possible messaging.

Kelly Donohue, a bank examiner from Winthrop, Massachusetts, appeared on Jeopardy! for the first time last week and won a total of $79,601 for during a three-day reign as champion. His time on the show did not seem too out of the ordinary, save for a slightly awkward moment of live TV when Donohue answered a question with the outdated term, “What is gypsy?” as opposed to the socially preferable “What is Roma?” Guest host Anderson Cooper pointed this out briefly, but Donohue received the point.

He continued on his winning streak, competing on the Los Angeles game show set until April 26 when he lost (somewhat miserably) to contestant Dana Schumacher-Schmidt.. But it’s another moment from that night’s episode that’s drawing not only attention but serious concern over white supremacy. Yahoo News broke the story which has gained steam on Twitter.

Did the champion on #Jeopardy just give the white power sign? We need an explanation! #AndersonCooper pic.twitter.com/o7GTaFlfQz

As you can see in the Jeopardy! introduction sequence, linked above, Donohue held up three fingers then tapped them against his chest while holding his thumb and index finger together: a sideways O.K. sign. This motion is officially recognized as a hate symbol by the Anti-Defamation League.

In 2017, 4chan users falsely claimed that this finger symbol represented “wp,” or “white power.” Even though there was no evidence to support it, the online hoax grew to the point of real-life popularity with white people throwing the symbol as trolling mechanism. In 2019, the racist Australian mass murderer Brenton Tarrant utilized the symbol when appearing in court after Christchurch, New Zealand mosque shooting in which he killed 50 people. From then on, the dark intent of the classic O.K. seemed clear-cut. The OK. symbol was seen popping up on hands throughout the Capitol mob in Washington, D.C. last January.

Donohue claims that he was trying to personalize his introduction by drawing attention to the fact that it was his third game, being the returning champion. And in Donohue’s defense, he did throw up deuces — in honor of his second game — during the quiz show introduction on April 25. (See a pic of that moment below.) Then again, being a Jeopardy! champion with knowledge of all things trivia, it’s hard to imagine Donohue had no idea about the coded meaning of his hand gesture — especially during a period so fraught with civil rights abuses against black people. Social media was quick to respond, calling out Donohue’s apparently brazen white power salute. Others, however, maintain that this is not a social justice issue and that Donohue was truly demonstrating the number three.

Taking a similar approach to both the Jeopardy! Dr. Oz boycott and the LeVar Burton support campaign, 467 former Jeopardy! contestants have signed an open letter, published on Medium yesterday, which demands a response from ‘Jeopardy!’ over Donohue’s hand gesture. The statement places blame the show’s producers for not catching the symbol sooner and removing it from the taping. The writers explain:

“During other tapings of “Jeopardy!” episodes, changes have been made to avoid negative messaging making it to air. On more than one occasion, contestants have made gestures during their introductions that were seen as undesirable for broadcast and were asked by the production team to reshoot the footage without the gesture. A couple of years ago, a contestant unintentionally wagered a monetary amount that used numerical values coopted by white supremacist groups and, since the total didn’t affect the outcome of the game, “Jeopardy!” digitally altered the numbers in the version that aired. This should have been done in this case. Intentional or not, the burden was on the production team to catch the similarity to a hate symbol and make sure it didn’t end up on air.”

Since Kelly Donohue has not formally apologized, these Jeopardy! alums and fans feel it’s up to the program to say and do more.