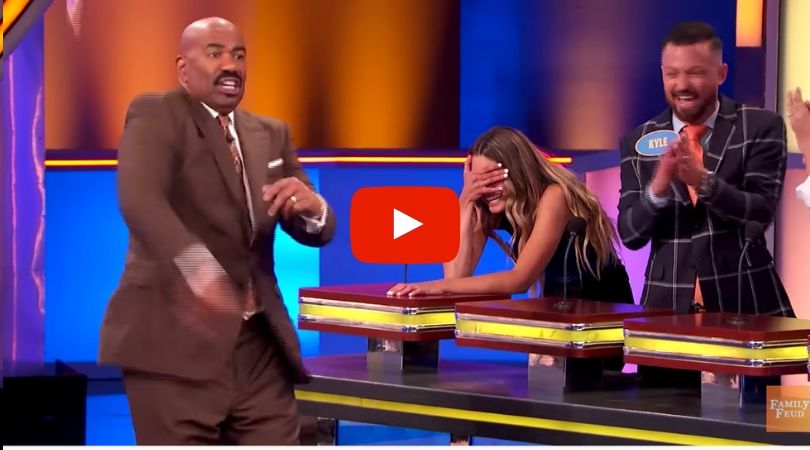 If there’s one thing you should know about me, it’s that I am a game show addict. I love everything from Family Feud to American Idol, Wheel of Fortune to Deal or No Deal, and your basic Trivia. It’s an addiction that I’m probably going to live with for the rest of my life. But hey, at least it’s better than being addicted to drugs. When I tell you that I watch Family Feud on a regular basis, it’s no joke. I love Steve Harvey, everything to do about him. I think he’s the most hilarious human being on the planet, besides Steve Martin of course. Harvey always finds a way of putting a smile on your face.

This time around, that’s exactly what he did. It’s no secret that Harvey can’t handle some of the hilarious answers on Family Feud. Well, just last week an answer that contestant Kyle Rueger said made Harvey toss his cards up in the air and begin to fistfight with the air itself.

Basically, the question the Rueger family was asked was, ?we asked 100 married men, if you were blindfolded, you would still identify your wife by feeling her what?? So, immediately the Ruegers managed to score lots of points with answers like lips, feet, breasts, and hair. You know the regular stuff.

But no, my man Kyle over here decided to go above and beyond despite his father-in-law being and the audience. He stated, “Well, you know Steve, I’ve got to be respectful of my father-in-law who is in the crowd tonight, but I’m going to have to go with her lady parts, Steve.” So hilarious, so expected. I can’t tell you how much I laughed at this, especially since I knew that was not going to be an answer. This is a family show my guy, but I appreciate the humor.

So, that’s when Steve takes a step back and just throws the cards up in the air while everyone is laughing at Kyle. Kyle’s wife also looked like she was mortified at his answer while having a mid-laugh attack. As expected the clip went viral on social media with several reactions from people saying that even though it was risky, at least he answered respectfully.

In the end, Kyle’s answer wasn’t on the board, but luckily someone else guessed hand correctly and it was a huge victory for the Rueger family. I wonder what Kyle’?s father in law said to him at the end of the show. The holidays are going to be fun this year!