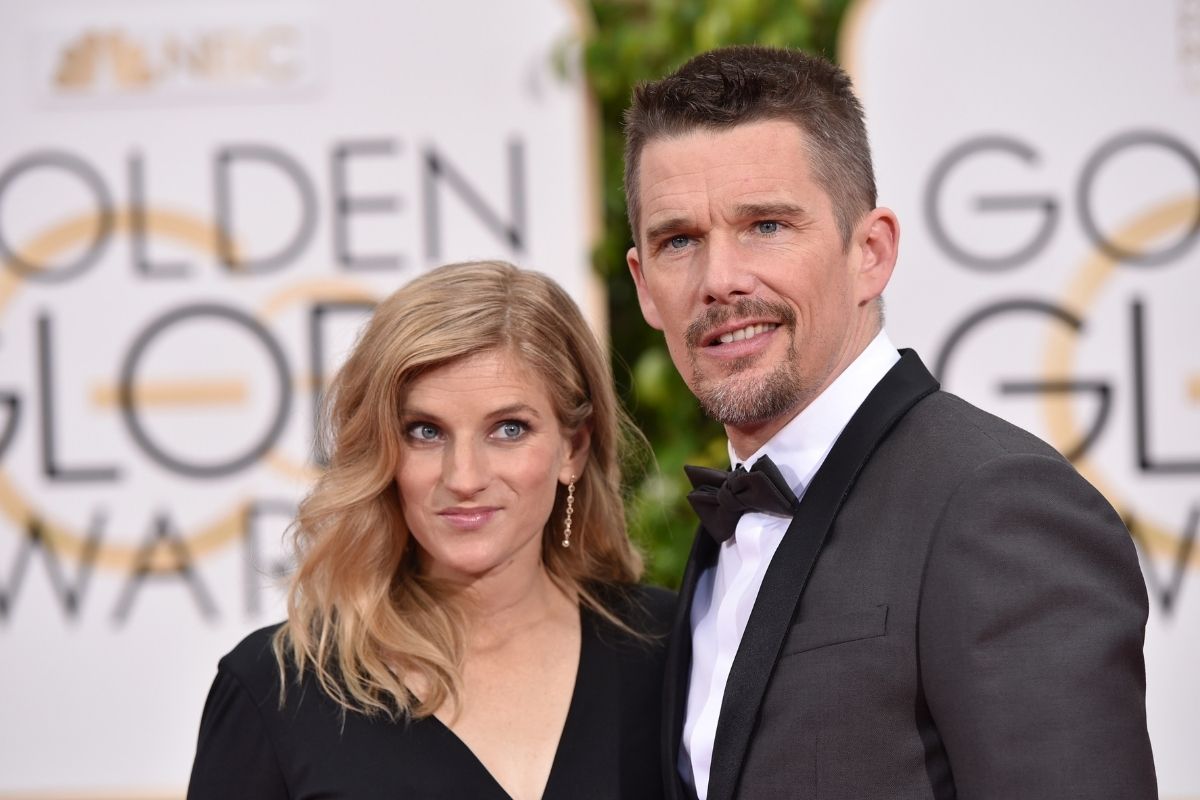 In Boyhood, Richard Linklater’s coming-of-age epic shot over the course of 12 years, actor Ethan Hawke delivered an intimate portrayal of fatherhood. But is this artsy Hollywood legend really a family man? The actor had two children with his ex-wife Uma Thurman and then married the nanny.

Ethan Hawke was born in 1970 in Austin, Texas before moving to New York City with his mother, following his parents’ divorce. Hawke appeared in a movie for the first time when he was just 14, in Joe Dante’s Explorers. Four years later, in 1989, his breakthrough came in Dead Poets Society. Hawke had been planning to attend college — not continue acting — when the teen drama became a surprise hit.

Ethan Hawke went on to become one of the biggest stars of the 1990s, starring as slacker Troy in the Gen X classic Reality Bites, then as the romantic lead in Richard Linklater’s pioneering Before trilogy. The premise of Before Sunrise sounds exceedingly simple: a young, wishful American man becomes swept up in a one-night romance with a sweet French girl (Julie Delpy), as the pair wanders the picturesque streets of Vienna. Hawke and Deply were credited as co-screenwriters, thanks to their improvisational style. As a result, the chemistry that bloomed on-screen was so gentle, so real, that the experimentally dialogue-driven romance became a staple of indie cinema. Two sequels, Before Sunset and Before Midnight, have continued the love story, taking real-time aging into account.

That lengthy project inspired another Richard Linklater venture: the impressive Boyhood, which covers the life of one boy, Mason (Ellar Coltraine), from childhood till the day he leaves for college. Ethan Hawke and Patricia Arquette play Mason’s divorced parents, and both earned Oscar nominations for their work; Arquette won for Best Supporting Actress.

Aside from acting, Ethan Hawke also directs and writes. The collaborative original screenplays of Before Sunrise and Before Sunset were both nominated for Academy Awards. Hawke made his directorial debut in 2002 with Chelsea Walls, a drama centering on struggling artists living in New York’s historic Chelsea Hotel. In 1996, Hawke wrote The Hottest State, a novel following the misadventures of a disaffected twenty-something — not so unlike the characters Hawke was so known for on film. Hawke directed a film based on the book in 2006. He’s has written four more novels since.

More recently, Ethan Hawke has focused his attention to the stage, appearing in several Broadway productions. He has also opened himself up to the increasingly heavy medium of television. In February, Hawke became a Golden Globe nominee (for the second time) for playing the radical abolitionist John Brown in The Good Lord Bird on Showtime.

Ethan Hawke met the trendy action actress Uma Thurman in 1997, on the set of the dystopian sci-fi Gattaca. Quickly, they became a celeb It couple and wed in 1998. The same year, they had their daughter Maya Hawke. Their son Levon was born in 2002.

In 2001, Ethan Hawke and Uma Thurman were co-stars in the mostly forgotten Richard Linklater movie Tape. Filmed on a $100,000 budget inside the walls of a Michigan motel room, this strange three-person drama takes place entirely in real-time and is an interesting addition to Linklater’s temporal portfolio. And for anyone curious about what an argument between Hawke and the bad-ass Kill Bill actress might have looked like, Tape — which can be streamed on Amazon Prime — is a fascinating watch.

Uma Thurman and Ethan Hawke separated in 2003, citing Hawke’s infidelity, and their divorce was finalized in 2005. Following the breakup, Hawke began dating the Canadian model Jennifer Perzow, but soon settled down with Ryan Shawhughes — who’d been the nanny for Thurman and Hawke’s family. In 2013, Hawke told Mr. Porter that he does not believe in monogamy.

“People have such a childish view of monogamy and fidelity… ‘He’s cheated so he’s bad, she’s cheated so she’s bad’, as opposed to a recognition that our species is not monogamous.”

Ryan Shawhughes nannied for Ethan Hawke and Uma Thurman’s family while she was a student at Columbia University (where Thurman’s father, coincidentally, is a famous professor). Although rumors surrounding Hawke’s infidelity dominated the coverage surrounding his high-profile divorce from Thurman, he insists that Shawhughes was not the reason for the split. In fact, Hawke and Shawhughes did not get together immediately. Hawke told The Guardian in 2009:

“After a short period of working for me, Ryan went back to Columbia to get her degree. There were never any scandalous thoughts or actions back then. In the years that followed, my marriage disintegrated due to many pressures, none of which were remotely connected to Ryan.”

The couple married in 2008 and have two daughters together: Clementine, who is 13, and Indiana, who is 10. Ethan Hawke and Ryan Shawhughes seem quite happy, living a private life and raising their family in Brooklyn.

Ryan Shawhughes is also an actress. She has appeared in her husband’s film, Blaze, and him in Paul Schraeder’s First Reformed. She currently serves as an executive producer on The Good Lord Bird.