How Many Times Has Jane Fonda Been Arrested? 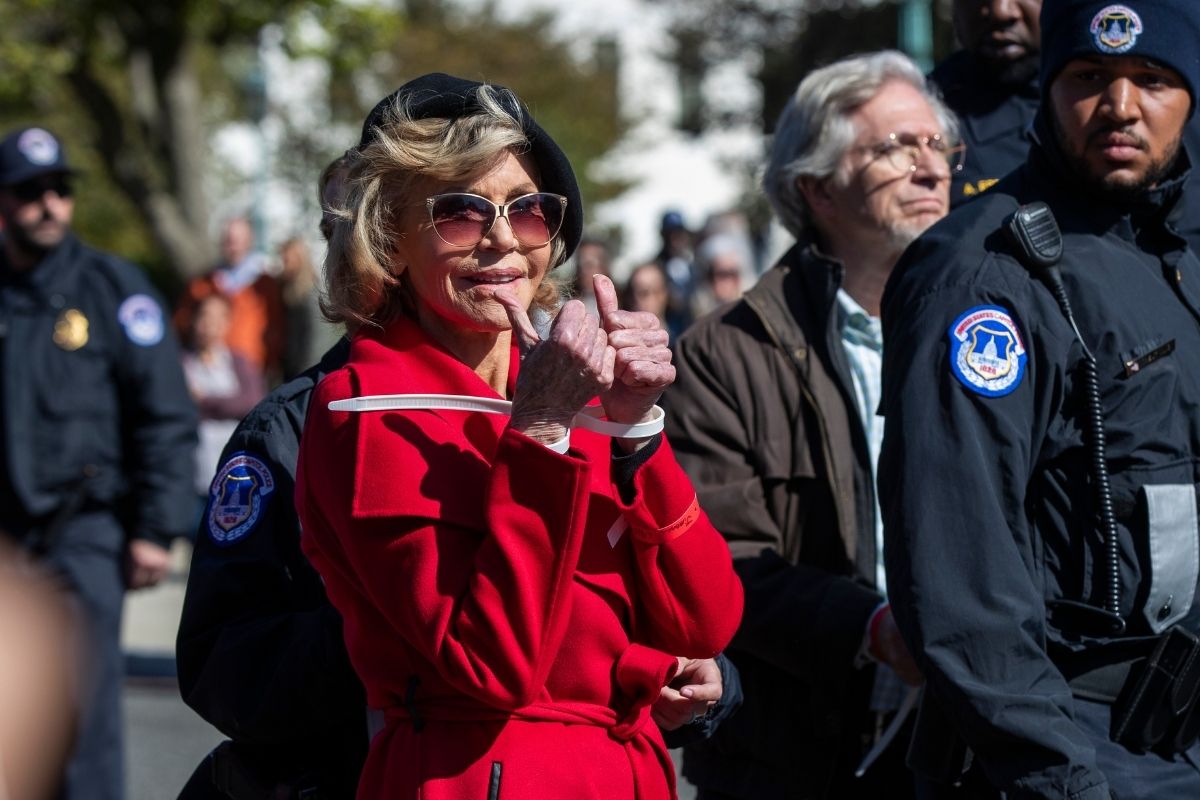 Not only does Jane Fonda have a long and iconic Hollywood career, but she also has a long and iconic commitment to civil disobedience as well. In 1970, Fonda was arrested in Cleveland, Ohio on ?trumped-up drug charges,? per the Washington Post. Apparently, then-president Richard Nixon had ordered the arrest, and Fonda had been under surveillance by the FBI and CIA for months due to her anti-Vietnam War activism. Nearly 50 years later, now in her 80s, Fonda has been arrested several times, this time for ?crowding, obstructing, and incommoding? by joining climate change protests in Washington, D.C.

Jane Fonda was born to American actor Henry Fonda and Canadian socialite Frances Ford Brokaw on December 21, 1937, in New York City. She made her film debut in Tall Story in 1960 and thus began her extremely successful acting career. She has won two Best Actress Oscars for Klute (1971) and Coming Home (1978) and in 2021 was awarded the Cecil B. DeMille Award at the Golden Globes. It was while she was filming Klute that she was arrested in Cleveland after reentering the United States from Canada and took that famous mug shot with her clenched fist raised in defiance.

In an essay on her personal website, Fonda wrote that she had been returning from giving her first lecture at what was to be a North American speaking tour aimed at educating people, particularly college students, about the atrocities the United States was committing in Vietnam. Her job was to raise money for a project with the group Vietnam Veterans Against the War. When she landed at the airport, her bags were searched and authorities found packets of vitamins labeled ?B,? ?L,? and ?D,? (for breakfast, lunch, and dinner).

She was arrested for drug possession and informed that the arrest had been ordered by President Nixon. Wrote Fonda, ?I think they hoped this ?scandal? would cause the college speeches to be canceled and ruin my respectability.? The charges were eventually dropped and, per Fonda, ?The irony was that as a result of all the bruhaha over this, the college audiences for my speeches were never less than 2000 and sometimes as large as 10,000.?

Jane Fonda has remained an activist throughout her life, but she managed to avoid getting arrested again for 50 years. After the 2016 election, as reported by The New Yorker, she attempted to reach out to Donald Trump to discuss the climate crisis and the environmental dangers of relying on fossil fuels. When she was rebuffed, she decided to try some civil disobedience, at first planning to pitch a tent on the National Mall. She then heard from someone within the organization Greenpeace about a group of students who, inspired by activist Greta Thunberg, were holding weekly Friday protests.

Fonda set up a home and office in Washington, D.C., and joined forces with the student protesters, organizing Fire Drill Fridays. Fonda?s involvement brought the protests national attention. They are meticulously organized, with Fonda hosting a web-based ?teach-in? every Thursday with activists and climate experts providing information and advice. On Fridays, Fonda and the other organizers lead a climate change protest, demanding a Green New Deal.

What A Way To Spend An 82nd Birthday

81-year-old Fonda was arrested five times during Fire Drill Fridays, even spending the night in jail after one of her arrests. The fifth time took place on December 20, 2019, the day before her 82nd birthday. Clad in her signature red coat, which serves as her ?protest uniform,? Fonda has been joined by fellow celebrities at the protests, including Diane Lane, Sally Field, Sam Waterston, Ted Danson, and Rosanna Arquette as well as well-respected activists like labor leaders Dolores Huerta and Ai-jen Poo. On December 20, she was joined by Catherine Keener, feminist pioneer Gloria Steinham, and Lily Tomlin, her co-star from their beloved Netflix series Grace and Frankie.

The group marched to the Capitol, where they sang and chanted on the lawn for several hours before Fonda led them to the Hart Senate Office Building. They peacefully entered the atrium and sat down, chanting ?This is what democracy looks like!? and ?What do we want? A Green New Deal. When do we want it? Now!? Fonda was arrested by Capitol police along with 138 fellow protestors. They were processed in a warehouse and when Fonda entered, her wrists bound by plastic cuffs, she ?managed to maneuver her hands above her head, letting loose a whoop of triumph.? Fellow detainees cheered back and sang her ?Happy Birthday.? Fonda was not the only older woman arrested and wasn?t even the only one in her 80s. Jane had commented in the past that older women make the best activists, and reportedly quipped during a talk at the National Press Club ?When you get older, what have you got to lose? ?I?m not on the market for some guy who?s scared of strong women. I?ve been married three times to one of those. Now I?m on my own. I?ve got time. I?ve got courage.?