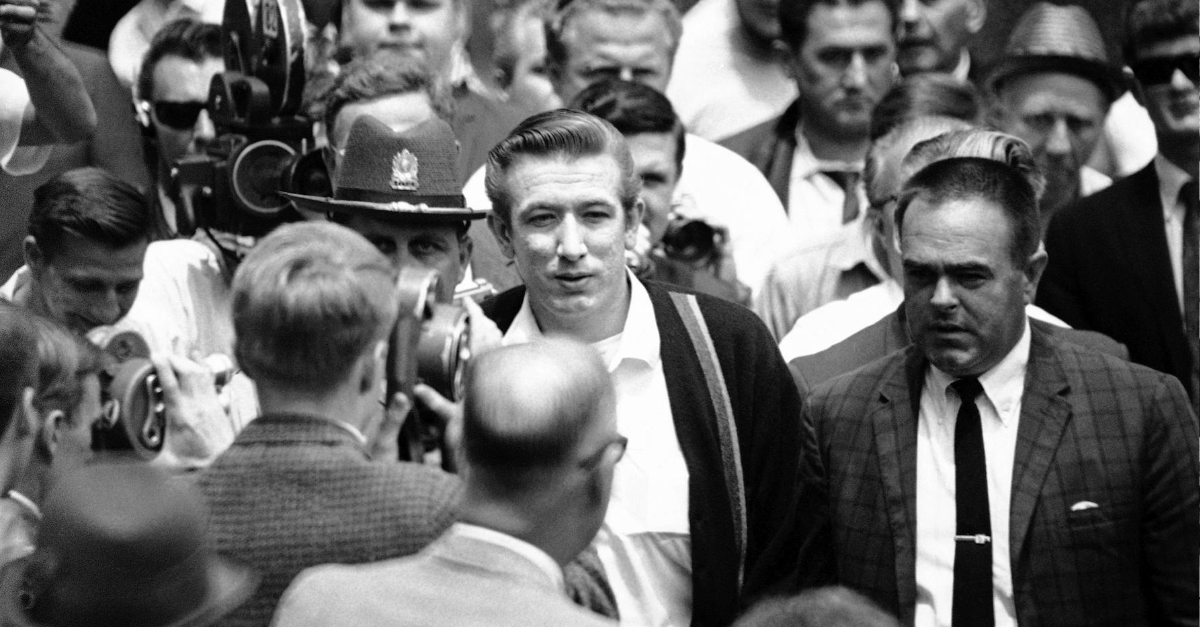 On the night of July 13, eight student nurses were murdered brutally in their homes while they slept. Throwing it all the way back to 1966, here’s some scaring for the masses from the hands of Richard Speck.

Richard Benjamin Speck was born in the small city of Monmouth, Illinois, into a family with very religious parents.  But, when he was six years old, his life changed drastically when his father died of a heart attack in 1947. His new stepfather was an abusive drunk. The family moved to Dallas, Texas, never really having stable housing.

By the time he dropped out of high school in his first year, Richard Speck was already drinking heavily. When he got a teenage girl pregnant, he started working. But it wasn’t long before his first arrests. They would only multiply in number over time, amassing to nearly fifty arrests while he was still in his early twenties.

Richard Benjamin Speck(December 6, 1941 – December 5, 1991) was an American mass murderer who systematically raped one and tortured and murdered eight student nurses from South Chicago Community Hospital on the night of July 13 into the early morning hours of July 14, 1966. He was convicted at trial and sentenced to death, but the sentence was later overturned due to issues with jury selection at his trial. Speck died of a heart attack in 1991, after 25 years in prison. In 1996, videotapes featuring Speck were shown before the Illinois State Legislature to highlight some of the illegal activity that took place in prisons. #serialkillers #serialkiller #truecrimes #truecrime #scaryfacts #scarystories #casesolved #evil #serialkillerquotes  #serialkiller #serialkillers #murderer #murder #killers #truecrimes #truecrime #crimes #scary #scaryfacts #quotesbyserialkillers #evil #crime #solvedcase #horror #unsolvedmysteries #mysteries #mystery #mysteriesoftheworld #unsolvedcase #killerunknown #creepypasta #creepy #ghoststory #urbanlegend #richardspeck #mindhunter

A post shared by horror,crimes,mysteries&murder (@crimesandserialkillers) on Jul 23, 2020 at 12:06am PDT

Speck got the woods Born to Raise Hell tattooed on him, and that’s precisely what he did. Speck did marry a woman named Shirley Malone. Often she was subjected to rape any abusive from Speck. She was grateful when he was imprisoned in 1965 after her husband attacked a woman in the parking lot with a carving knife. He was supposed to be in jail for 16 months but was released after only 6, due to a mistake. When he returned, Shirley filed for divorce with the child. This enraged Richard Speck, and he only stoked the fire of his violent, unpredictable behavior.

After he returned from prison, he moved back in with his sister in Monmouth, where he continued to escalate. On one particular rampage, he killed a coworker, a barmaid at a bar he had been performing carpentry for. He also got into a barfight, and stole a car, and robbed a grocery store. He ended the night with an unlawful B-N-E, torture, and raping of a 64-year-old woman. When these events landed Speck in questioning, he relocated to Chicago with another one of his sisters. There he tried to get a job with the National Maritime Union. When he showed up in mid-July to find that his position on his first assignment had been given to someone else, he went on a bender.

The bender began at a bar. There he met a 53-year-old woman named Ella Mae Hooper who’d been drinking all day, too. He held Hooper up at knifepoint and raped her. He then proceeded to steal her pistol.

Out on the Chicago streets, Speck stumbled upon a townhouse where nin student nurses lived while working at the South Chicago Community Hospital. Spek broke in through the window, and in the first room, found Corazon Amurao. With the pistol, he proceeds to round up all the nurses, including  Valentina Pasion,  Nina Jo Schmale, Merlita Gargullo, Patricia Matusek, Pamela Wilkening, half of which were American, the old half were exchange students from the Philippines. According to Corazon Amurao, Speck told the American girls that they should trust him, and maybe he wouldn’t harm them.

However, Speck did the unthinkable. He led the girls from room one by one and killed each of them either by stabbing or strangulation. Corazon Amurao was the only one to survive the incident by rolling under the bed when Speck’s back was turned, likely when he was distracted by other student nurses, Suzanne Farris and Mary Ann Jordan, returning to the townhouse. He murdered them, as well. And Gloria Jean Davy, who was dropped by her boyfriend later that night.

Amurao reminded under the bed until 6 am when she thought it was finally safe. She ran straight to the nearest window and shrieked, “They are all dead. My friends are all dead. Oh God, I’m the only one alive,” until police officers arrived.

A Doctor who’d read about the slaughter recognized Speck’s hell tattoo when we went to the hospital a few days later. He was placed on trial on April 3, 1967, where he claimed to have no recollection of having murdered the student nurses. Amurao was the eye-witness for the case. In a case that shocked America, it was one of the first times random; merciless killings were present.

After 45-minute jury deliberation, finding Speck’s prints at the Townhouse scene of the crime, he was found guilty and given the death sentence. This decision was later life in prison in 1971, where Speck died the day before in the fiftieth birthday, from a heart attack, in December of 1991.