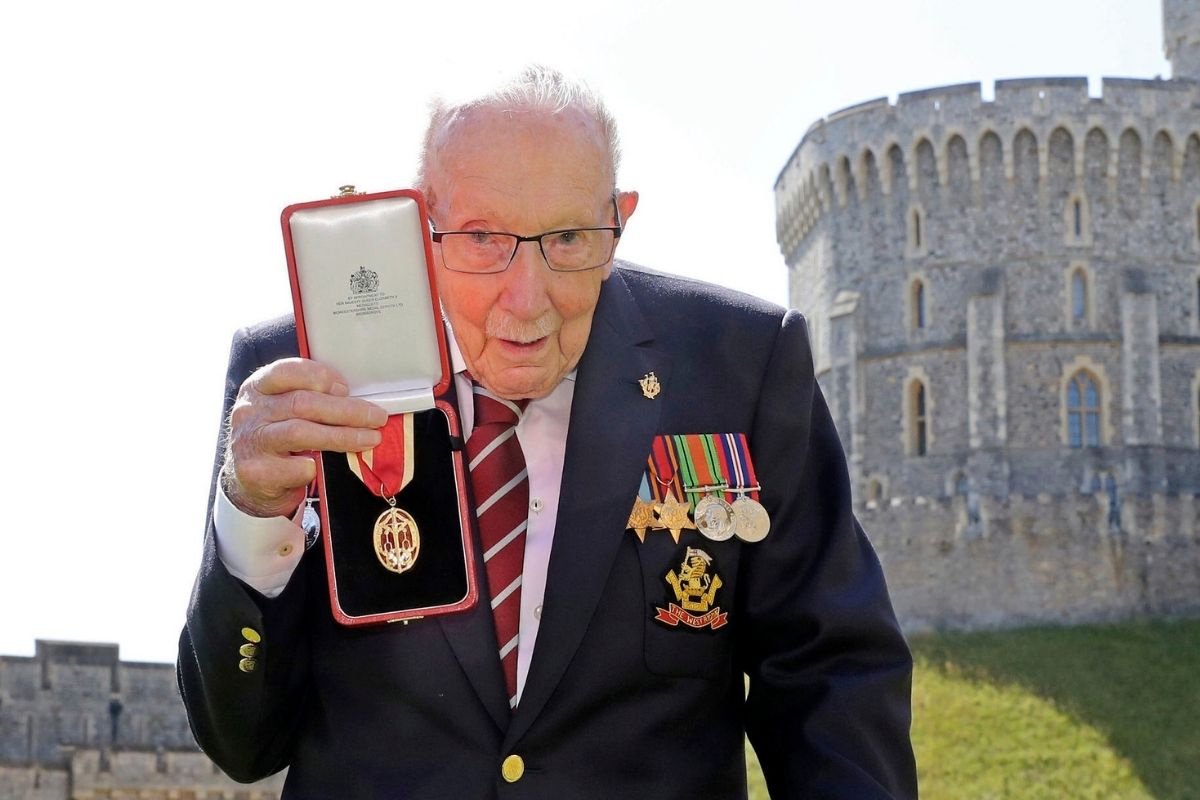 Editor’s note: This article was originally published on April 15, 2020. It was updated just shy of a year later, after news of Captain Sir Tom Moore’s death hit headlines.

The WWII veteran who raised millions for healthcare workers who were fighting on the frontlines against the coronavirus pandemic, has now passed away at 100 years old. According to his daughters, the war hero has contracted COVID last month and unfortunately lost this battle. He was highly recognized by the NHS (National Health Service) for raising nearly $40 million to help COVID efforts.

His daughters, Hannah INgram-Moore and Lucy Teixeira said, “Whilst he’d been in so many hearts for just a short time, he was an incredible father and grandfather, and he will stay alive in our hearts forever,” and NHS Charities Together Chief Executive, Ellie Orton, said, “If it wasn’t for him and the remarkable fundraising her has done, we wouldn’t be able to [provide] the extra support that we give to the NHS. It’s been phenomenal, the funds that he has raised are making a significant difference in the NHS right now and these funds are additional to what the NHS and the government are able to give.”

Sir Tom walked 100 laps, with his walker, around his garden to raise money for the pandemic. He was awarded with a knighthood by Queen Elizabeth II in July 202 for his efforts, saying, “I am absolutely overawed. This is such a high award and to get it from Her Majesty as well – what more can anyone wish for? This has been an absolutely magnificent day for me.”

He will be remembered for how much he loved his country and how much he inspired everyone to do what they can to help others. Our hearts and condolences go out to his friends and family as we remember and honor him too.

As the world has come to a standstill because of the coronavirus, people everywhere are doing what they can to help support the fight against COVID-19. One person, in particular, was determined to do all he can, even if he thought he was limited in doing so.

British World War II veteran, Captain Tom Moore, decided he wanted to walk laps around his 25-meter garden as a fundraiser for NHS charities (National Health Service). The 99-year-old veteran, just shy of his 100th birthday, had recently broken his hip and wanted to thank the doctors and nurses who took care of him by raising money to support health care workers during the coronavirus pandemic.

His family used social media to help his fundraising efforts, sharing that he wanted to walk 100 laps around his garden by the end of April. They thought that raising 1,000 pounds was going to be difficult, but they were in for a big surprise. Captain Moore’s drive to walk, even with a weak hip, inspired the British public during these times. 250,000 people supported his cause, and he ended up raising six million pounds within a matter of days. That’s equal to 7.5 million American dollars. Amazing.

I’m Captain Tom Moore, war veteran, 99 years of age (soon to be 100) and I’m walking for the NHS to raise money for our heroes.https://t.co/M1dkvoV3kE

This war hero became so popular that he even appeared on national television. Having full support from the British public, celebrities, and other war veterans gave Captain Moore “his next purpose,” as his daughter, Hannah Ingram Moore told BBC. Before he became an army captain, serving in India and Burma, Moore was a civil engineer. He has truly lived a full life of purpose.

Make sure to check out the 99-year-old army veteran’s fundraising page to keep supporting his laps. Moore’s efforts are an example of how everyone should find it within themselves to contribute the little they can against the pandemic. Being quarantined with a weak hip shows that none of us have excuses.

Watch: Veteran Punched Punk Through Car Window For Threatening To Kill His Wife