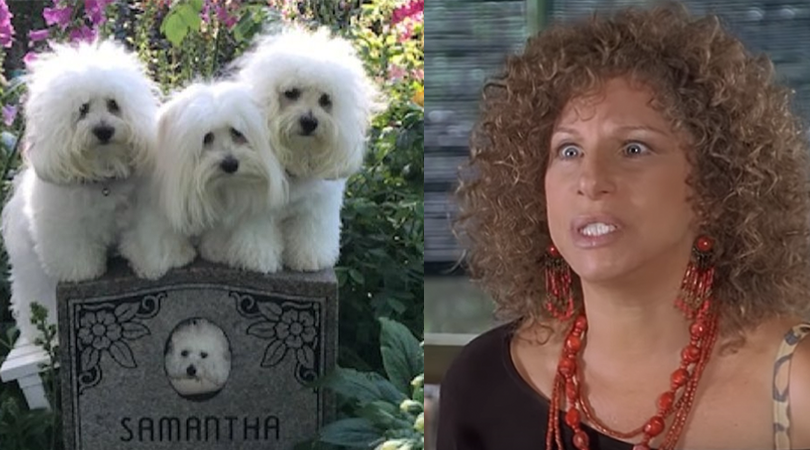 It has come to my attention via a recent Buzzfeed article that iconic, mega-wealthy singer and movie star Barbra Streisand cloned her dog, Sammie, a few years ago after it died. Now she has two clones of Sammie. Is that weird?

Asking this question requires a few caveats. First off, a person can do whatever non-harmful things they want to with both their lives and their money. Second, it’s not our place to judge. So really the answer to the question, “Is it weird that Barbra Streisand has two clones of her dead dog?” is “Who cares?”

But in a broader sense, do you think there is something a little off about cloning your dog? Or, rather, how would you feel about cloning your dog? Assuming you had Streisand’s resources or cloning technology became so readily available that you could run down to your nearest Petco with a piece of Spot’s foot that you tossed into a Ziplock after a coyote got him and have a new pup 3-D printed while you went across the street and grabbed a coffee, what choice would you make?

In theory, I’m against it. I sit here and like to think that I’m mature and high-minded enough that I would choose to be a participant in the circle of life and let nature run its course, ushering life in and out of existence in a natural cycle. But I know myself. I’m full of shit. And furthermore, hypothetical me is “making” this decision objectively.

In reality, I’d be making the decision to clone my dog the same way Streisand did: in an extreme emotional state. In that situation, there’s almost no chance I don’t clone my dog. And I probably wouldn’t even acknowledge that I was being a hypocrite. I’d probably tell myself some bullshit like, “Well humans were naturally made to be intelligent so us inventing cloning is natural, thus cloning my dog is natural.” It’s certainly what I’d tell myself while on my deathbed if I had the chance to upload my consciousness into a virtual afterlife or a cyborg capable of tasting food and being sexually gratified. It’s definitely not my fear that there may be nothing after death and my general selfishness! Nah! I’m just taking door number two that nature and the time in which I was alive gave me.

The one way cloning your dog would be objectively weird — and I’m sure someone has done this — is to clone it while it’s still alive. Streisand’s situation is different. She has two clones. But the clone and the original living together gives me the creeps. I don’t care if the dog has no idea. I’d still suspect the clone was plotting the original dog’s murder. I’d still be positive that the original dog was freaked out by out. Is that all a big projection on my part? Sure. But whatever. Drawing an arbitrary line often makes me feel like I’m being reasonable.

So is cloning your dog weird? It’s definitely eccentric. And you’re probably a better person if instead you adopt one of the roughly infinity dogs already alive and in need of home rather than cloning your meticulously bred show dog because you miss cuddling with it. (For what it’s worth Streisand also did that, according to her New York Times op-ed.) But no, cloning your dog isn’t that weird. And not wrong either.

But still. Maybe use all that money to help the equally sweet and lovable dogs already alive. I know I wouldn’t.

Editors Note: This article was originally published on July 11, 2019.