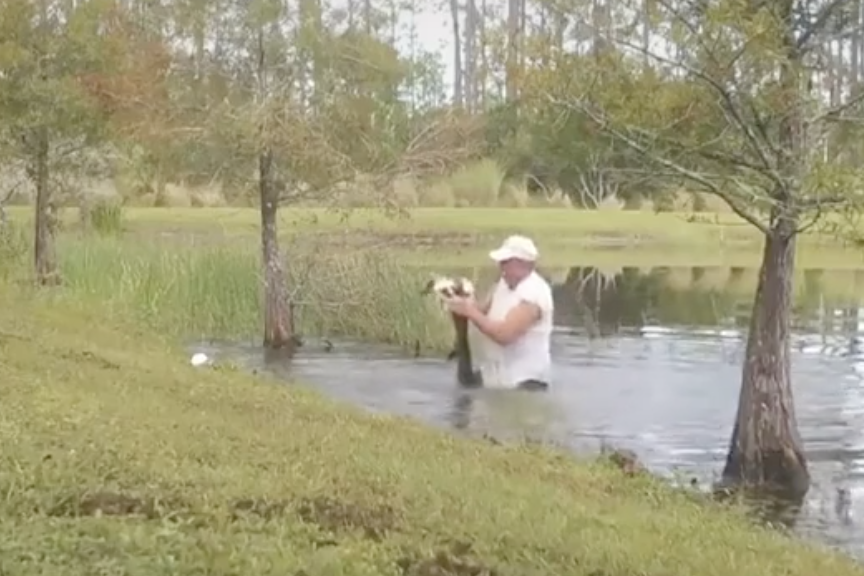 A 74-year-old Florida man was caught on video rescuing his 3-month-old puppy from the jaws of an alligator that jumped out of his backyard pond and pulled the dog under.

Man saves his pupper from an alligator. from ActualPublicFreakouts

74-year-old Richard Wilbanks was smoking a cigar in his backyard while his brand new Cavalier King Charles Spaniel puppy, Gunner, happily played near the water’s edge. This being Florida, however, there was evil lurking in the dark.

A small (but big enough to eat a puppy) alligator popped out of the water and dragged Gunner under. Hearing the ruckus and seeing his sweet new puppy being pulled under, Wilbanks sprinted toward the pond, cigar in mouth, and dove in after his dog.

With his adrenaline pumping Wilbanks shot into the water like a missile and pulled the puppy, who was still in the gator’s clutches, out from underwater. The gator, however, was still holding on tight, so Wilbanks had to force the gator’s mouth open. The entire ordeal was caught on a wildlife camera set up by the Florida Wildlife Federation and the Sop Foundation, who the cameras in the yards of Florida residents whose homes have a shared landscape with wild habitats in order to observe the animals.

Fortunately for everyone, both Gunner and Wilbanks were fine, though Wilbanks did suffer some small puncture wounds and was bleeding after the encounter. Gunner, at this point, is probably acting like a typical puppy and is none the wiser to the fact that he was almost murdered by a small dinosaur.

Credit to Wilbanks for not only moving like a man a third his age to save his beloved puppy but not even losing his cigar in the process.