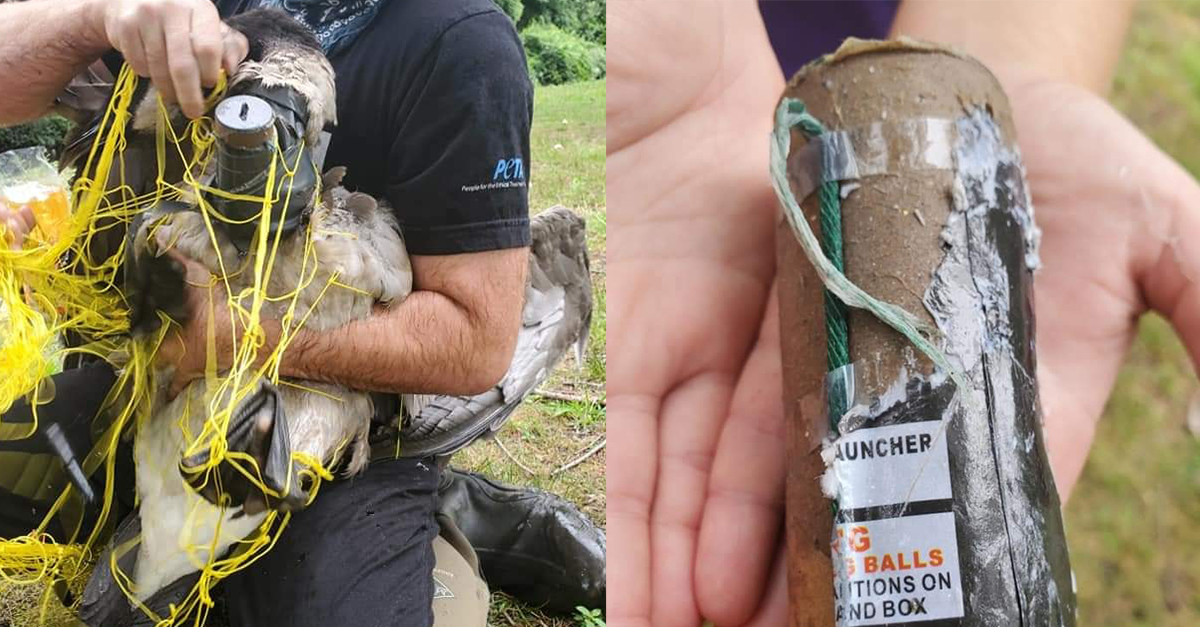 Animal rescue workers were called to a horrific scene in Baldwin, New York when a goose was spotted with a large firework duct-taped to its body.

The Canadian Goose was spotted in Silver Lake Park in the New York burg on Long Island with a large firecracker strapped to its breast. Volunteers from PETA and the Long Islanders Orchestrating for Nature showed up to rescue the bird, which was injured by the duct tape but thankfully not the firecracker, which had apparently been lit but was extinguished after the bird presumably jumped into the water immediately after being released by the psychopath who taped the explosives to the bird.

A serial-killer in the making duct-taped fireworks to the chest of a Canada Goose at Silver Lake Park in Baldwin, NY. The explosive appeared to have been lit but was soaked in water, presumably when the cowardly perpetrator let go and the bird wisely escaped into the water.

The link between animal abuse and violence toward others has been well-documented by the FBI. Until the person or persons who strapped this firework to this goose are brought to justice, other animals and humans are in danger.

LION and PETA are offering a reward of up to $5,000 for information leading to the arrest and conviction on cruelty charges of the person or persons who committed this horrific act.
Please donate toward this reward below. If it remains unclaimed, all funds will be redirected to LION’s mission of helping animals on Long Island and beyond. ?

PETA and LION are currently offering a $5,000 reward for information that leads to the arrest and conviction of the person or people who tried to murder this goose in the most messed up way possible.

2. I know geese are assholes, but c’mon man.

3. I live nowhere near Baldwin, New York and I will not sleep well until they find whoever did this. Just… sheesh. I need a beer.

4. We give PETA a lot of guff here but, good work PETA. Thanks to you and LION for saving that goose.