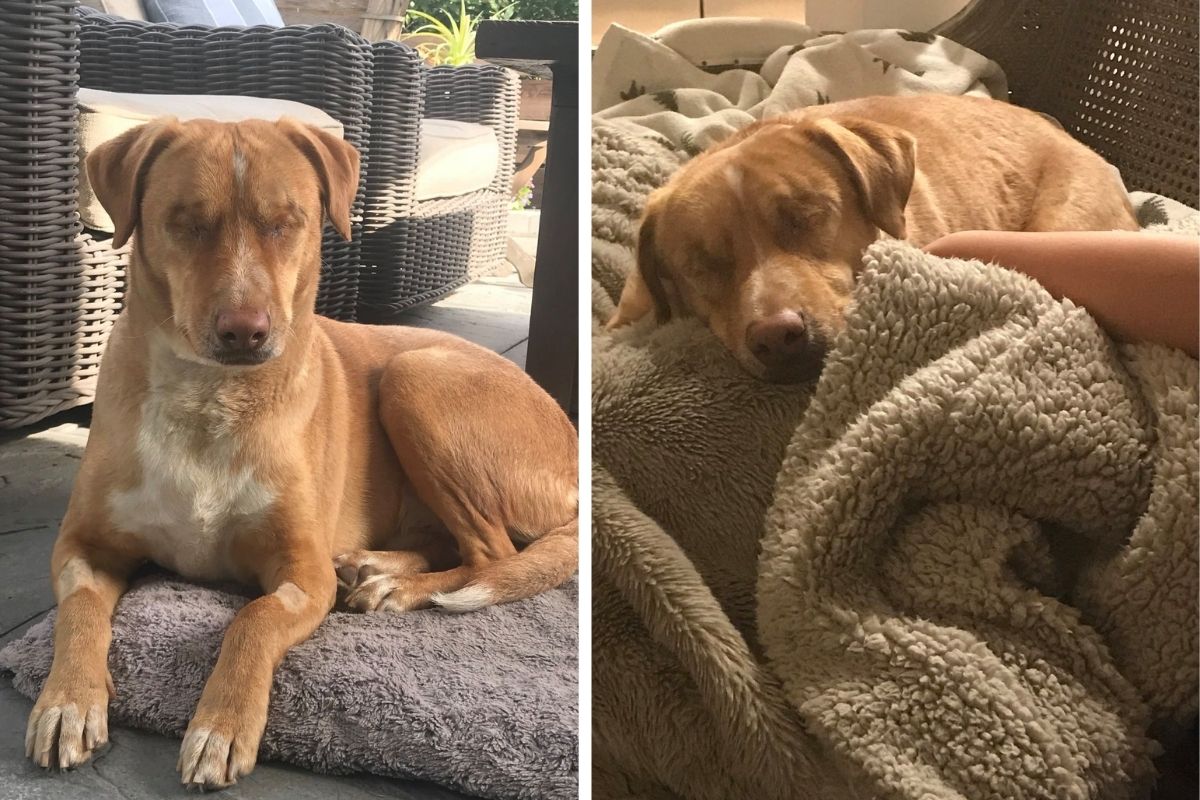 There are some cruel cruel people in this world. I will never understand pet owners who decide not to take care of their animals whenever things get rough. As a fur momma myself, I would do anything to keep my cat safe, even if that means him losing an eye. But not these selfish and terrible owners, who I hope Karma gets back to them. Meet Louis, a 3-year-old Lab-Shepherd mix who is now looking for a forever family that will accept him just as he is. And let’s face it, he is quite adorable.

Louis arrived at Helen Woodward Animal Center in Rancho Santa Fe, California, last month after being surrendered by his previous owners. Upon his arrival, the pup was dealing with a lot of change. At his previous home, Louis had developed a nasty eye infection. According to the rescue, it was a case unlikely any other vet has seen. According to a release from Helen Woodward animal shelter, the dog’s owners opted to have Louis’ eyes removed in early December 2020 instead of paying to treat the infection.

Following the procedure, the pup came home and tried to adapt to life without eyes, but his terrible owners were less flexible. Unfortunately, sweet little Louis was surrendered to pound in Calexico shortly after his operation because his previous step owners couldn’t adjust to living with a blind dog. A rescuer partner of Helen Woodward pulled Louis from the pound and decided to bring him to the Animal Center.

The pooch arrived at Helen Woodward Animal Center, heartbroken, nervous, and nearly blind. Unfortunately, according to a medical check, little Louis also had old untreated injuries which likely came from being hit by a car. According to Helen Woodward Animal Center adoptions director Hella Tyler, “It is incredibly important that people who consider getting a pet know the obligations they take on with these animals. When people get their pets for free off of Craigslist, they don’t seem to realize that pets come with responsibilities and a monthly expense for their caretaking, including medical care. In turn, these pets will provide their owners with unparalleled love. They pay it back tenfold. It’s just devastating to see an animal treated the way Louis was treated.”

So, trying to get Louis his hopes up, the non-profit organization placed that puppy in a new foster home, where he is now adjusting to a life without eyes thanks to his foster family. Now, all precious Louis needs is to start the next chapter of his life by finding a perfect match. Helen Woodward is now working to find his forever home. The animal clinic stated that in order to adjust to his living, his new family should live in a one-story house and ideally should work from home. It’s the perfect forever home. Since the dog is barely adjusting to limp from an old injury and loss of sight, he is looking for a family who is “prepared to provide patients and special care as he learns his way around a new home.”

A Second Chance for Louis!

As far as what Louis can give to the family, well a lot of snuggles and of course a lot of love to offer. According to Tyler, “Louis is extraordinary. He really suffered at the hands of his former owners but he shows no malice towards humankind. He is ready to love the perfect family and he certainly deserves one.” As a thank you for giving the pup a second chance, the animal clinic is offering its adopters a free training session, treats, and dog food.

He will be up for adoption starting on Wednesday, January 13th. To adopt Louis or for more information on Helen Woodward Animal Center, you’re asked to fill out an application on www.animalcenter.org or call 858-756-4117. Pit Bull, Golden Retriever, Chihuahua, Bulldog, Labrador? You name it! They have all adorable foster dogs for all!

Watch: Ungrateful Man Returns Dog to Shelter for Being ‘Too Affectionate’