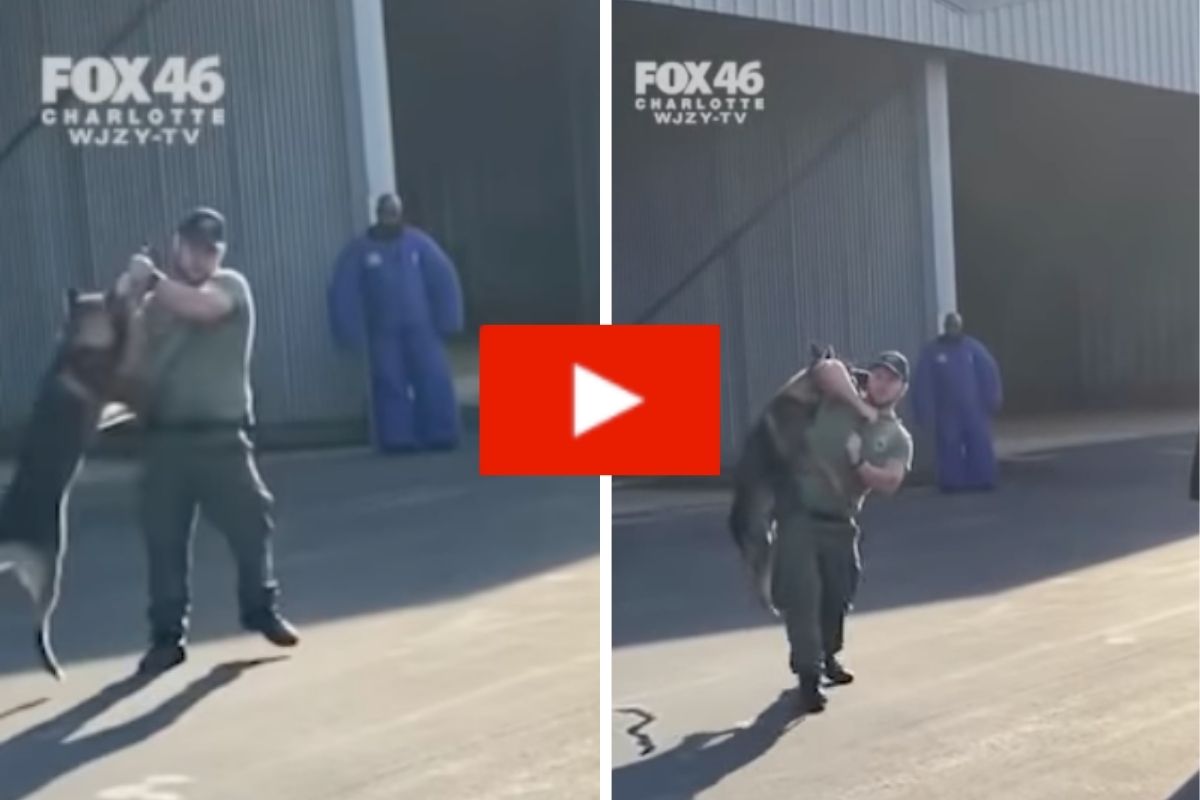 Editor’s note: This article was originally published on March 4, 2021. It was updated once again after it was found that the officer wouldn’t be facing any charges.

Although the footage of former Salisbury police officer James Hampton mishandling a K-9 was clear enough to spark outrage that resulted in his resignation, the Rowan County District Attorney’s Office confirmed that he will not face criminal charges.

According to TMZ, they said that although the video itself shows a “bad act,” there’s just not enough evidence that a crime has actually been committed. The office also explained that it spoke to Hampton’s coworkers, who spoke on how the dog wasn’t disciplined properly in this incident, but believe that Hampton actually had no intention of hurting the dog. He has also reportedly paid “thousands out of his own pocket,” for veterinary bills for earlier K-9s.

Nevertheless, the video shows Hampton picking up the dog by the leash, swinging the hanging dog by his neck over Hampton’s shoulder, and then harshly slamming the dog into the police vehicle. The dog, 4-year-old Zuul, turned out to be perfectly okay and healthy, but that didn’t compensate for the fact that other officers who witnessed the incident in real time had given small laughs, with one heard saying, “We’re good, no witnesses.”

PETA President Ingrid Newkirk wrote in the Salisbury Post, “Dogs are not robots. They are emotional, thinking and feeling beings. Like us, they relish freedom, enjoy pleasure, avoid pain and are anxious to help and loyal to a fault. A dog who is yelled at ? let alone hit ? is demoralised and starts to distrust human interactions. Today, we know, or should know, that dogs like humans break down mentally if they are bullied. As they say, it?s not the dogs who are at fault ? it?s whoever raised them? the least we can do is get to know them better and treat them with respect and gratitude.”

Editor’s note: This article was originally published on March 4, 2021. It was updated on April 5, 2021, after the officer handed in his resignation.

Last month, a police officer was caught on video mishandling a K-9, resulting in an investigation. According to ABC News, as the Salisbury Police Department concluded their investigation of Officer James Hampton, the officer mishandling the dog, saying that he, “had acted in a manner entirely inconsistent with his K-9 training and had violated Police Department policy,” and that, “As a result, he was recommended for termination.”

According to Salisbury Police Department policy, employees subject to termination are afforded a due process hearing before any disciplinary action takes place, but officials said that Officer Hampton handed in his resignation, effective immediately. The video in question shows Officer Hampton lifting his K-9 named Zuul off the ground by his neck, swinging the poor dog around, and then slamming him into the side of the police car. Thankfully, it was reported that Zuul, “was not harmed and is healthy and being well-cared-for.”

In Salisbury, North Carolina, an investigation has been launched on an officer who was caught on video poorly handling a K-9 police dog. The investigation stems from the horrifying video showing the officer taking the dog’s leash, clipping it onto its collar, and roughly swinging the dog’s entire body over his shoulder where the dog was hanging above the ground by its neck. He then slams the dog into the vehicle. You hear another officer in the video say, “We’re good… no witnesses.”

The officer was unnamed pending the investigation, but the disturbing video was enough to initiate more observation. As the video continues, you can hear other officers asking one another if their cameras are on, followed by requests that the cameras be turned off.

Roy Taylor has been a veteran police K-9 handler for more than 20 years and has also been a police chief in three North Carolina cities. He thoroughly criticized the officer’s physical handling of the German shepherd named Zuul, saying, ?I think this was an example of something you should not do. By slinging the dog over his shoulder, carrying him back, he?s cutting off that blood supply and air for several seconds, and then by throwing him in the vehicle the way he did, he risked causing some cervical spine or cerebral spine injuries to the dog?

He also expressed concerns in how the officer’s actions would affect the investment in K-9 training, explaining, ?Sometimes it can be up to $20,000 to $25,000 and the potential damage to the dog?s training. Now going forward, the dog?s going to have to reconsider whether he gets out of the car at all,” referring specifically to how the officer was escorting the dog to the police vehicle.

However, Salisbury Police Chief Jerry Stokes remained vague in a news conference about the investigation, purposely not commenting on whether the treatment was permitted or not. He did mention that it may have been part of the canine training tactics, saying, “when a canine is non-compliant with the handler’s commands, the handler is trained to correct the dog.”

He also explained that the officer is currently administratively separated from the K-9 unit while “SPD (Salisbury Police Department) conducts its review.”

I can be the first to admit that I lose my patience more quickly than most, but I don’t think I can relate in feeling this frustrated with any living being to do this to them. Not to mention that this officer could’ve potentially backtracked this police dog’s training, probably scaring it into not responding the way it’s supposed to. Kyle Heyen, a former police officer who trained dogs for law enforcement agencies, said, ?The actions of the handler were not appropriate. If you?re frustrated because that dog came out at that point in time and you respond with that much frustration, it just makes you wonder what that officer is going to do in a real-life situation.?