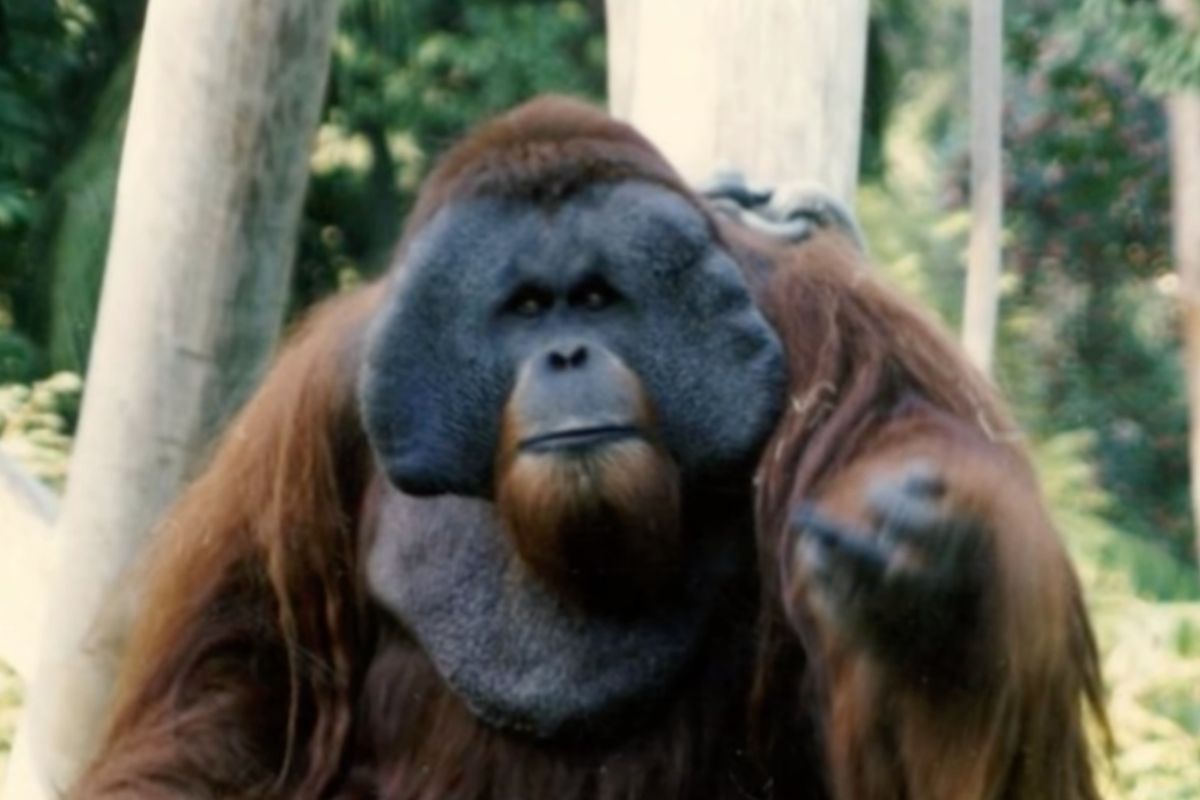 It’s common knowledge that Orangutans are the human’s intellectual counterpart. They share 93% of our DNA, are great communicators, are easily trained and very intuitive. Before the tragedy of Harambe, there was the heroism of Ken Allen, the zoo orangutan.

In 1985, there was a sassy Bornean Orangutan named Ken Allen living at the San Diego zoo safari park. Over the years he became a hero and was known for his intelligence in becoming a regular escape artist. From a young age, he was making nightly escapes from his cage by unscrewing the bolts to explore the nursery and then re-screwing them in the morning before zookeepers arrived. He also liked to playfully unscrew any lightbulbs he could reach.

His first escape was on June 13th, after the 250 lb. orangutan climbed up and out of his exhibit. Allen ventured into the walkway along with tourists and peered in the other zoo animals in their cages like a zoo visitor. Of course, staff quickly caught him and sent him back to his cage.

After this, zoo officials upped his pen security. The wall enclosing his open area featuring a playpen and large moat was raised by four feet, in hopes to prevent another escape. However, that did not happen. A few weeks later, Ken Allen escaped again. This time, the Hairy Houdini made his way to flex, as they say on his nemesis. Allen’s nemesis was another orangutan named Otis. At one point they were pen-mates, but that day, zookeepers found Allen throwing rocks at Otis.

As if fate would have it, things just kept happening that enabled him to escape his cage. In August he found a crowbar in his pen left behind by careless zoo workers. Allen tossed it to a nearby female orangutan called Vicki who used it to open a window to let him out. After this, he was moved to another, more secure pen.

Allen became the zoos most talked about creature. He made the local news and the zoo printed shirts with every headline he’d made on them. Other T-shirts and bumper stickers exclaiming to “free Ken Allen” were also sold. Allen also had his own fan club, the Orang Gang. They printed a very lengthy 100-page newsletter, “The Orang Gang News.” A local psychiatrist and composer even wrote a punchy song for the orangutan that would become hit. ‘The Ballad of Ken Allen’ physical single was also sold at the zoo.

While all of this madness about Ken Allen occurred, zookeepers still were struggling to keep the guy in his cage! Once he even climbed out of his cage, making his way towards the lions’ engagement amongst zoo-goers, posing for pictures along the way. Every time the zoo figured the orangutan’s escape route and blocked it, a new way appeared. Or should I say Allen appeared outside of his cage? Once he even climbed like Spiderman to get out.

The zoo changed its approach, by adding lady orangutans to his area. Hoping to rouse his male dominance, they gave him four more than his nemesis, Otis had. This didn’t change, no, sir. His antics did, however, influence two of his new lady orangutan friends to escape as well! I guess you could say that the San Diego Zoo during the days of Allen was a bit of a … zoo?

Personnel became so baffled by the orangutan’s constantly evolving escape methods behind their backs. They decided to go undercover as tourists to observe in plain sight how they were escaping. Not only did this not work, but their failed sleuthing was headlined by a news outlet as “gorilla tactics.”

The San Diego Zoo spent about $45k to prove they were smarter than the monkey. Ahem, to advance their security systems for everyone’s safety. In all, Allen managed 9 escapes over his lifetime before he decided to give the zoo a break, after having had his fun. As he aged, he found his new form of humor, flipping off kids from inside the glass.

In an unfortunate turn of events, everyone’s favorite orangutan was diagnosed with lymphoma in late 2000. On December 1, he was euthanized to keep him from further suffering. The San Diego Zoo cremated Allen and created a memorial in his honor. The Orang Gang printed a two-page tribute and held a candlelight vigil in honor of Ken Allen. They proclaimed he would have done the same for them.