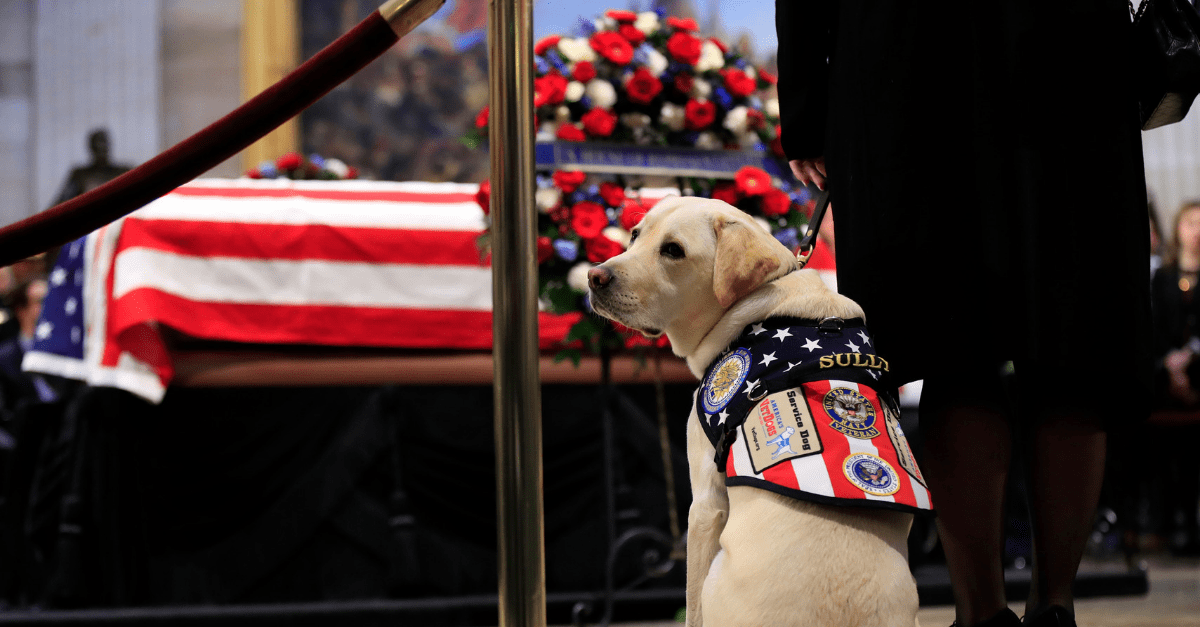 When President George H.W. Bush passed away in December 2018, mourners nationwide were captivated by a single image that we still haven’t forgotten. That photo of the pup in front of Bush’s casket, shown below, is a somber reminder of the way service dogs are trained. The former president’s service dog, Sully, is a Labrador retriever, named after the iconic airline pilot Chesley “Sully” Sullenberger III, the man who saved all passengers and crew aboard when he landed a passenger jet on the Hudson River in 2009 in New York. Sully the Lab is following in his namesake’s footsteps with this new assignment. No longer will the gorgeous pup be former President George H.W. Bush’s service dog, he will now serve at Walter Reed National Military Medical Center as part of the Facility Dog Program in Maryland.

America’s VetDogs posted an update on the Facebook page, updating the world on the yellow Labrador’s next post.

"Mission complete." – @sullyhwbush ❤️ Many of you have been asking about what Sully will do next, and we appreciate…

“Many of you have been asking about what Sully will do next, and we appreciate all of the love you have for him.

He will be working alongside fellow VetDogs facility dogs SGT Dillon and SGT Truman who are there to assist with physical and occupational therapy to wounded soldiers and active duty personnel during their journey to recovery at Walter Reed Bethesda.”

Sully served the Bush family well as he came to the family after Bush’s Parkinson’s disease diagnosis. Trained by America’s VetDogs, a nonprofit organization that preps service dogs for service to military veterans, wounded veterans, and first responders. Sully was spotted on the TODAY show this morning with Jenna Bush Hager and her sweet girls, where they said their goodbyes to service dog Sully.

Sully will go on to spread his love at Walter Reed Hospital. He was a loving companion when my Gampy needed him most. My girls adored him—and wanted a final goodbye… https://t.co/8E9HZL6bxM

Oh what a day! Today I got to feel the warmth of the sun on my face, the sand beneath my paws and the wind in my fur. My buddy Hula & my pal Val all went to the beach to bask in this gorgeous weather 🐶🐾 ☀️Can you tell I had a blast? (📸 @americasvetdogs) . . . . . . . . #tongueouttuesday #SullyHWBush #SullyBush #bush41 #instagood #goodboy #DogOfInstagram #TalesOfALab #InstaDog #InstaDogs #Dogs #AmericasVetDogs #GuidedogFoundation #labrador

As we all remember today as the 10 year anniversary of @captsully landing US Airways flight 1549 on the Hudson, I think of the man from where I got my name from. Like my best friend, Captain Sully Sullenberger is an U.S. Airforce Veteran, and I was named after him by #FriendsofAmericasVetDogs in Sully’s honor for his service to our country. Thank you @captsully for my name, but even more so for your selfless service to our country that helped shaped you into the exceptional pilot you are today and were on this day 10 years ago. (📸 @captsully)

There’s really only one thing you can say of Sully. He is a very, very good boy indeed.