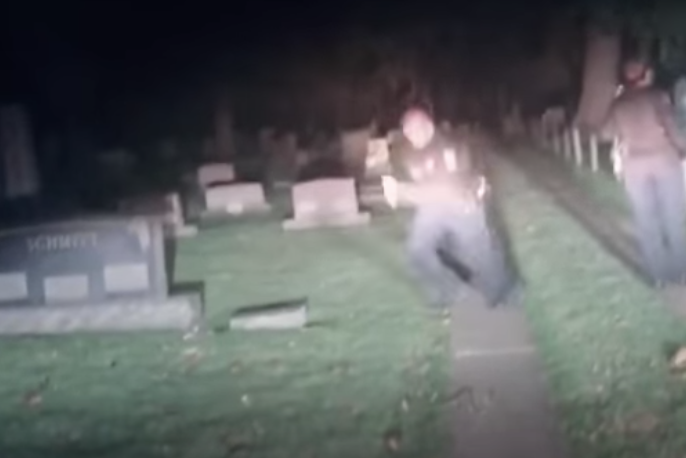 A video showing two police officers patrolling a graveyard in the middle of the night is going viral on social media because of the shocking and frightening way in which it ends.

Halloween came early for these cops and in the scariest way possible. This was no traffic stop. They probably called their family members to say they loved them one last time as soon as they dove back into their patrol car. All their dispatcher probably heard was crying and puking.

The law enforcement officers were patrolling this seemingly empty graveyard for reasons unknown when, out of nowhere, a blood-curdling banshee scream shattered the silence and sent both trained, armed, and presumably veteran officers running like terrified children. Not running, sprinting. They aren’t even people at this point. This is an animal reaction. A pure flight response.

And it’s hard to blame them. Did you hear that thing?

You have to feel a little bad for these cops though. That video is going to play on a loop at their police department every Halloween from now until forever.

What the Hell was That Thing?

The cougar scream video embedded above, however, doesn’t exactly make a compelling case that this could have been a mountain lion. The graveyard scream sounds human… ish. Maybe not a living human but definitely a dead human or some sort of demon from hell with a voice box similar to a human.

Either way, the cops are probably good with whatever this was resisting arrest. They probably don’t want to tangle with it anyway.