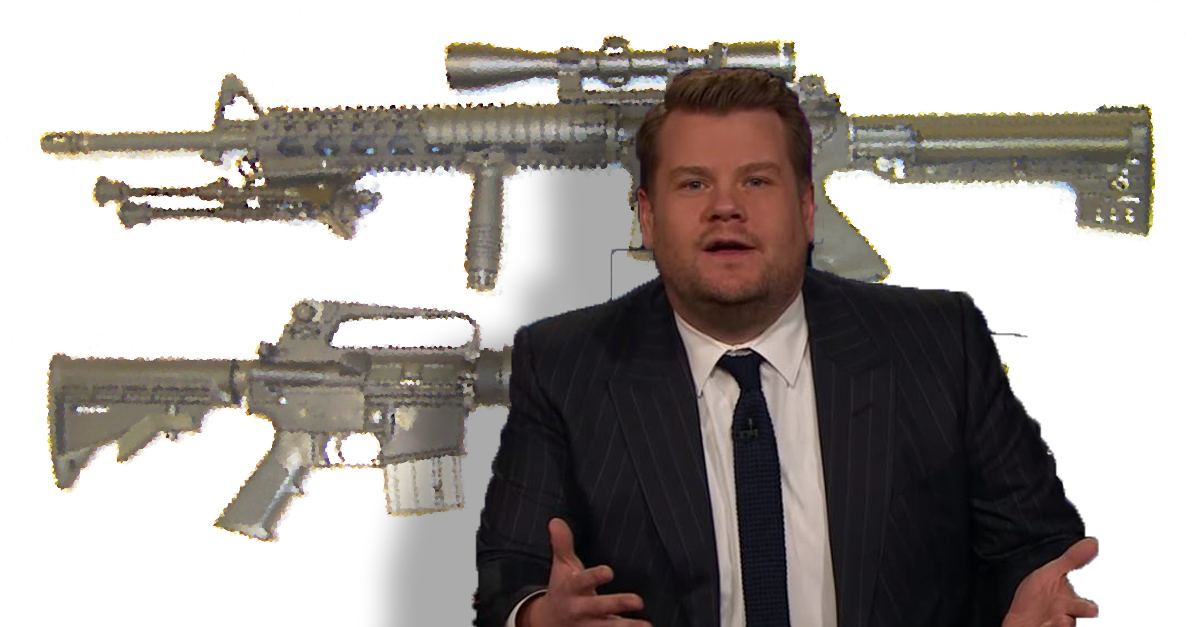 On Monday night, “Late Late Show” host James Corden joined the chorus of entertainers calling for the United States to re-examine its gun laws. And while the message may have been lost in the haze of determined and nearly identical arguments that follow any mass shooting, Corden at least made one new point about the way that America examines these massacres.

The host began by saying, “It pains us each time when we sit here and talk about innocent people needlessly slaughtered. We can’t imagine the pain and hurt that those communities and those families feel today.”

Corden then mentioned that he heard a statistic claiming that “[Sutherland Springs] was the biggest U.S. mass shooting in a place of worship.” He continued, “It amazed me that these shootings are so common in America that we now have a ranking system depending on the location of these tragedies. And what can we say? Nothing — nothing we didn’t say 35 days ago when this happened in Las Vegas.”

RELATED: James Corden takes his ambitious feud with Usain Bolt to another level

He took a shot at Trump, remarking, “The president says it’s too early to talk about gun control after Sutherland Springs, and once again, though, it is too late for the victims.” Corden closed by saying, “My thoughts are with the families and victims, and my prayers are for this country’s leaders to do something about this.”

During a Tuesday press conference in South Korea, President Trump was asked about gun control and pushed back on the question, saying that it’s a “situation that probably shouldn’t be discussed too much.” He noted that a citizen with a gun returned fire at the Texas church shooter and was probably able to stop the slaughter, saying that “instead of having 26 dead, you would have had hundreds more dead,” the Associated Press reports.

Following the Las Vegas shooting that left 58 people dead, Jimmy Kimmel delivered a tearful monologue criticizing what he interpreted as the callousness of Second Amendment supporters, saying, “But when an American buys a gun and kills other Americans, then there’s nothing we can do about that because the Second Amendment, I guess.”

Those remarks earned him a wave of backlash from Trump supporters, including one Californian artist who posted signs across Hollywood calling Kimmel a “cry baby” and referring to his show as “The Jimmy Kimmel Estrogen Hour.”