Believe it or not, Stephen Colbert and Steve Carell use to share an office back when they were working with the “Daily Show”.

Their time together with the show helped spawn this skit, which is about importance of drinking responsibly. You see, Colbert and Carell didn’t think television and all the alcohol companies out there were doing an adequate job of teaching the public about responsible drinking, so they took matters into their own hands.

Their way of doing so? Carell getting hammered on drinks while Colbert sits back, watches and tries to deal with his inebriated co-worker.

RELATED: Colbert’s hilarious CliffsNotes version of Super Tuesday is just what we needed to catch up on the facts

Real or acted, the video does serve as a good reminder of why you should watch your alcohol intake. Carell gets a little reckless, and then things turn belly-up when he ends up puking later in the night.

Does Carell think the night of drinking was a good idea? Yes, even if it only taught one person on the perils of irresponsible drinking: that one person being himself.

Thanks for the lesson, guys. 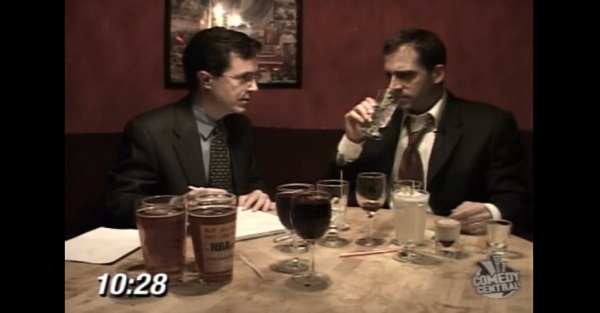