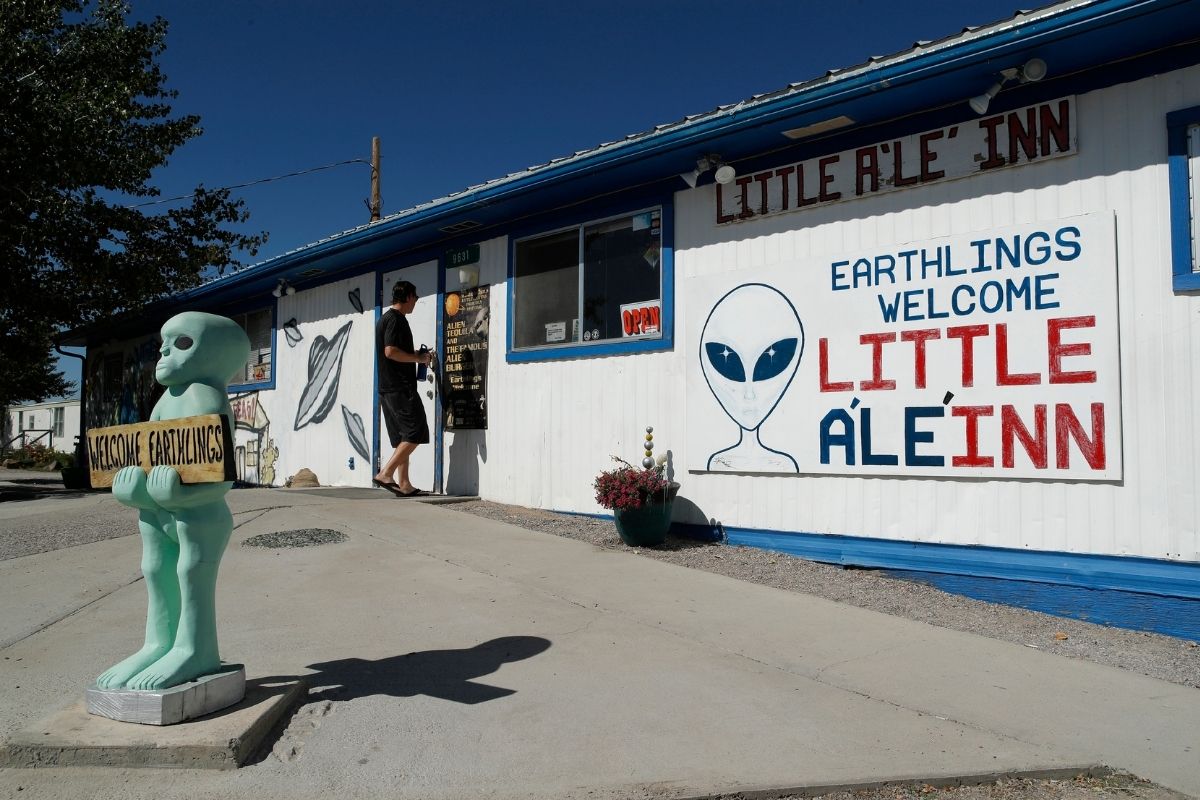 All Earthlings are welcome on the Extraterrestrial Highway, which reaches between two Nevada ghost towns, Crystal Springs and Warm Springs. But on the hundred-mile stretch of road, technically called Nevada Highway 375, reported sightings involve creatures much spookier than ghosts… Extraterrestrial Highway is home to Area 51, the highly classified United States Airforce facility which allegedly houses the government’s secret collection of crash-landed UFOs and hostage aliens. But do you know what else Area 51 has? A bar. And it’s called the Little A’le’Inn.

Located in Lincoln County, Nevada, Rachel is the society surrounding Area 51, though it only had a population of 54 as of the 2010 census. With so few locals, Rachel does not even have a post office. Most permanent residents live in mobile homes and their children bus 50 miles southwest to Alamo for school. However, the minuscule town thrives on the tourism of UFO enthusiasts and conspiracy theorists. This means that Rachel’s economy revolves entirely around its solebar, the Little A’le’Inn, which doubles as a motel and souvenir gift shop.

When excited travelers stop off Nevada Highway 37 in hopes of a flying saucer sighting, they usually don’t get much further than Rachel’s unique themed tavern. Connie West runs the bar, along with her mother, and prides herself on its core placement in both the Rachel community and the world’s mass community of alien obsessives. When Wests’s father assumed ownership of the pub in 1988, then called the Rachel Bar and Grill, he wanted to rename it the Litte Ale Inn. But a supposed mix-up at the print shop left him with a sign that read Little A’le’Inn. The pun (truly unintended) implies the presence of not only beer but also extra-terrestrials. And frankly, we are here for both. Luckily for the Wests, so are most weary Nevada road trippers.

In 1990, the West family abandoned the pretense that the Little A’Le’Inn could be anything but an alien bar. And while it’s no the Star Wars cantina full of rowdy extraterrestrials, the kitschy little A’Le’Inn is still entertaining for curious patrons. Even skeptics can enjoy a World Famous Alien Burger (or the Galaxy Wrap, as a low-carb option). Of course, other souvenirs are available too: warning sign shot glasses, green rubber alien heads, A’Le’Inn hoodies, and plenty of Alienstock merchandise commemorating the viral meme that turned into a Lincoln County music festival. After an explosion of online jokes last year about “storming” Area 51, more than 10,000 E.T. zealots and meme fanatics joined forces to convene in Rachel. The overwhelming response to the Facebook event, “Storm Area 51, They Can’t Stop All of Us,” was otherworldly in its own right. What was meant as a lighthearted adventure for some, a serious mission for others, naturally turned into Alienstock: a fun festival with a now uncertain future, due to the Covid pandemic.

Connie West delighted in the diverse array of new clientele. Speaking to Thrillist, she said “We’ve had people that come in and they are truly looking, as they say, to ‘go home’… “They are looking for the mothership or a connection.” Not only is her inn the only restaurant in town, but it’s also, according to West, “the only toilet between Alamo and Tonopah.” So the Little A’Le’Inn is a quite necessary stop — even if you aren’t looking for Area 51. (But if you are, the Wests will offer directions and tour suggestions.) The structure of the Inn also encourage comradery among guests; the motel rooms within each unit share common spaces. As Alienstock proved in 2019, visitors might well leave Area 51 with a deeper human connection than they expected. And even if the Nevada desert can’t offer the secrets of the universe, at least it comes with a colorful cocktail. And at night, a sprawling sky full of stars.