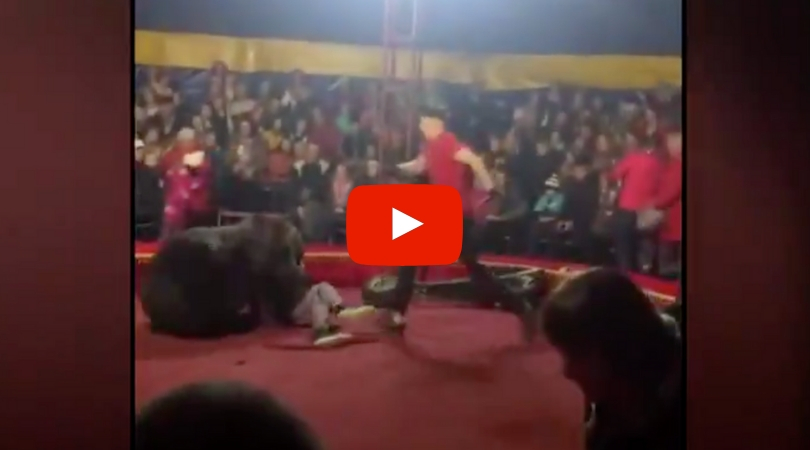 While circus animals have gone almost entirely out of vogue in the United States thanks to some indisputably necessary animal rights activism, elephants, tigers, lions, and bears entertaining the kids on unicycles, stools, balls, and whatever else is still a HUGE draw in Russia and other parts of Eastern Europe.

Disturbing video shows a circus bear turning on his trainer during a performance in Clonets, northern Russia. pic.twitter.com/YIJPuUIHDu

Children looked on in horror as the bear deviated wildly from its “Bow-legged and the Wheelbarrow” act and instead ripped the man in front of him apart. Frightened families ran for the exits. The other trainer kicked and electrocuted the bear in an attempt to get it to stop tearing his coworker limb from limb.

All the while there was nothing between the families and the bear. No fence. No barrier. The only thing keeping that bear from devouring all the little Dmitris and Vladimirs in that audience was the already served meat in front of it. According to authorities, even after the bear was “shocked into submission” it was still behaving in a frenzied state.

Add that to the planet-sized hard drive full of evidence that dancing around a ring with apex predators is a horrible idea. The bear doesn’t want to be trained. It wants to hunt. What’s fun for you? Seeing a movie? Golf? Ripping flesh from the bone of something that is still alive and screaming is a bear’s idea of a good time. Not exactly PC, I know. But it’s true.

This story was originally published November 5, 2019.

Watch: 5 Most Brutal Bear Maulings Ever Caught on Camera