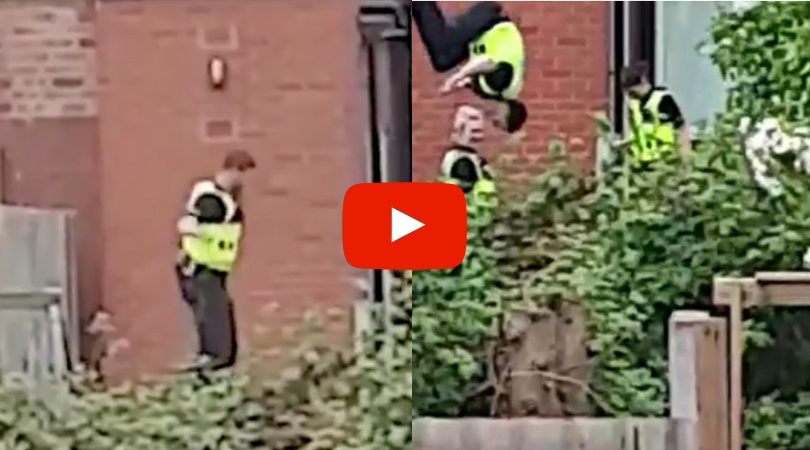 Hey, we always have to look at the bright side whenever things start to get too much. I get it. But this policeman might have looked at things a bit too bright. Why?  Well, a police officer in Coventry, England was caught having the time of his life during a drug raid after he was spotted jumping up and down on a trampoline.

Yes, this police officer who was just not having the whole drug bust decided to take a break by doing a little bit of exercise. The officer was filmed in a garden by a neighbor and is seen taking off his kit belt before performing stunts while other law enforcement officers around him laughed. If I’m being completely honest, it’s kind of impressive. Those flips are perfect. Makes you wonder what the drug dealers were doing inside while he was hopping around, though.

Obviously, the video quickly made its rounds on the Internet. Several users commented how ashamed they were of the cops, because well, they are in the middle of a freaking drug raid. The neighbor who filmed the cop posted on Twitter, saying, “This is what you pay your taxes. I can’t f*****g believe it.”

not doing their jobs police officer jumps up and down on a trampoline pic.twitter.com/AoXXSUcBt9

West Midlands Police confirmed it has launched an investigation saying it “appears to have fallen short of high standards.” Of course, the whole police department quickly issued a statement apologizing and saying that they expect their police officers to always have the highest standard when conducting any task.

But let’s be real, this all seems quite silly. I mean, he was only having a giggle. Sure, it might have been a dumb movement on his part, but it was innocent. I’ve surely seen cops do worst stuff, so bouncing around? Yeah, that’s alright. Just give this guy a slap on the wrist, remind him that he’s an authority figure, and just call it a day.

Editors note: This article was originally published on April 29. 2020.