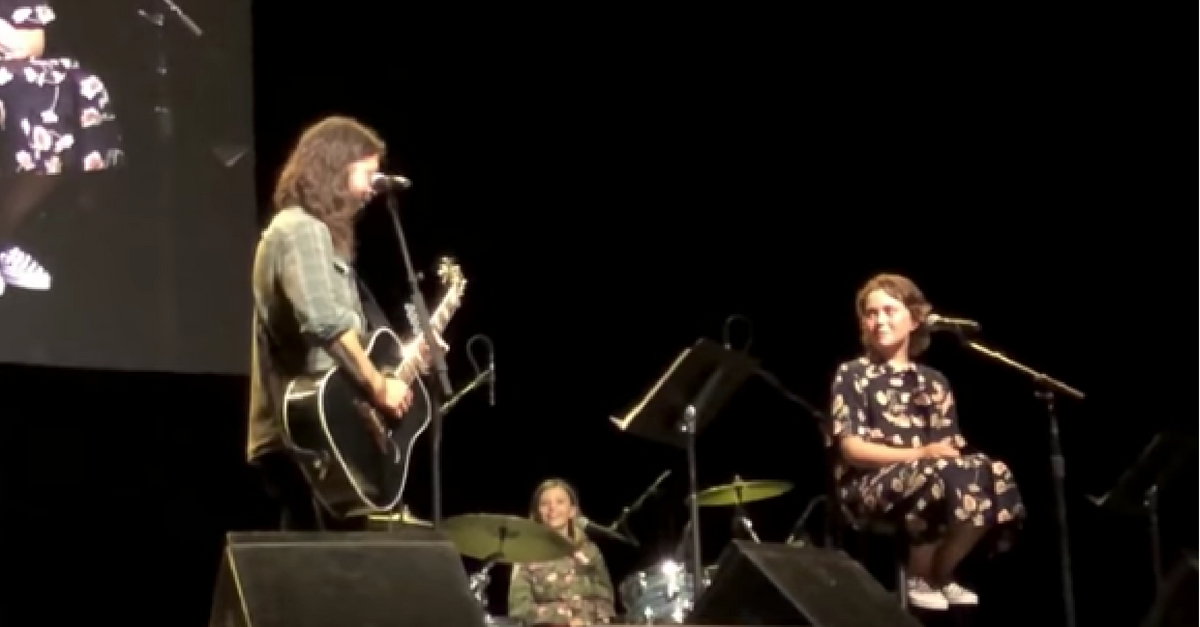 As if we needed another reason to fall in love with the Foo Fighters and Dave Grohl, the rock star once again captivated the hearts of millions with music, but this time with little help from his daughters.

Grohl’s younger daughter Violet joined him on stage during a benefit concert in Oakland, California to cover Adele’s When We Were Young, and boy, does that girl have pipes! Just watch below how in awe Grohl is staring at his eldest prodigy singing so effortlessly while nailing all the notes. Makes me want to teach my nonexistent kids to sing too.

The 12-year-old handled the lead vocal on the 25 single, while her father strummed along on an acoustic guitar. The duet was part of the Notes & Words benefit concert, which raised funds for the UCSF Benioff Children’s Hospital.

Following the cover by the wonderful Adele, Grohl’s 9-year-old daughter Harper also came on stage to play drums, while Violet sang backup, and Ghrohl sang The Sky is a Neighborhood. The set concluded with Violet singing lead vocals and Harper on drums, covering Queen’s We Will rock You and the Foo Fighter songs, Times Like These, Everlong, Learn to Fly, and My Hero. This wasn’t the first time Harper joined her dad on stage. In June 2017, the 9-year-old joined the Foo Fighters in Iceland for a drum-only take on the Queen classic. I’m starting to think the family is a Queen, family.

It’s safe to say these two girls got their talent from their father and join him along whenever they can. Both Violet and Harper appear in the music video “The Sky Is a Neighborhood” in which Grohl directed them. Although we might know him this amazing musician, who once played with Kurt Cobain, when it comes to his kids, well, he’s just a dad. Can you imagine a Saturday night at the Grohl house?

In an interview with Simple Most, Grohl, who is married to Jordyn Blum, stated that despite their obvious talent, his daughters live a life just like any other kid would, and spend endless amount of time watching slime-making videos on Youtube and skateboarding.

Besides Harper Willow and Violet May, the couple also has a daughter Ophelia, who unfortunately can’t play any instruments as of yet, because she’s only 3. She will probably be just like her sisters, and who knows, maybe learn how to play the bass, and boom. It’s the Grohl Family Band! I don’t know what you guys think, but personally, these two have the potential to follow their famous dad’s footsteps.

Editor’s note: This article was originally published on July 27, 2018.

Watch: Weed Plants Sprouted on the Anaheim Stadium Field in 1976 After The Who Concert