Stunningly Violent Brawl at Disneyland Between Family Caught on Video 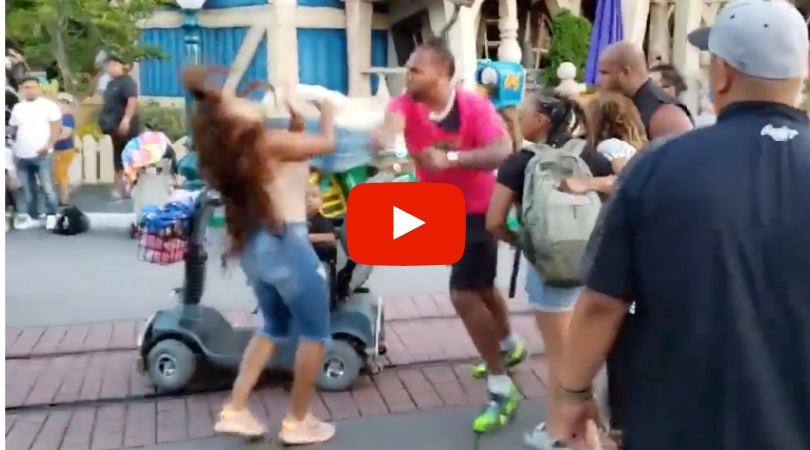 Alright, I get that sometimes family tension can escalate so much that we want to just throw in the towel and punch them right then and there. Heck, whenever I get angry at my brother and he makes fun of me for it, I sometimes feel like slapping him because I am so furious. BUT, I don’t. Because that’s not what we do. We don’t become animals and resolve our issues by slapping people in the face and throw them to the ground.

But apparently, this family, who was at Disneyland and had 1,000 eyes on them, believe that fighting in public is the solution to solving an argument. Let me try to break it down for you. So basically, the violent brawl broke out between family members after a woman spit in a man’s face, which obviously prompted him to slap her.

The viral video shows the woman’s husband running up to the man and jumping in, and the two men begin to exchange punches while their children and other park guests watched in horror. The Disneyland brawl, which was taking place at Disneyland’s Toontown park in Anaheim California, escalates as the man in the white shirt (who was with the first woman who was punched by the man in pink) punches the wife of the man in the pink shirt and tried to break up the whole fight. Which obviously, he doesn’t succeed. But yes, it’s a total mess.

As they continue to ridiculously punch and slap each other all over, an older woman is seen getting up from her mobility scooter before trying to get in the middle of the fight. Then, out to nowhere, the lady gets punched in the face and from 0 to 100 quickly falls down. Between you and me, it didn’t seem like a real fall rather an overexaggerated one, but I’ll give her this one.

While guests are helping the woman up from the ground, the man in pink then slaps the woman who started the fight, also sending her to the floor and pulling her by the hair. What seemed ridiculous to me about this whole incident is that it took Disneyland officials and bystanders at least 5 whole minutes to break up the fight! You can clearly see this man punching women to the ground, and he isn’t being stopped. He’s also using so much force that these women are physically being thrown down to the ground because of how hard he is hitting them. Oh, and he also keeps repeating, “I’m ready to go to jail tonight.” Geesh. What kind of Disneyland guests are these?

Anaheim Police conducted a criminal case and apparently interviewed the family members involved who were not being cooperative, because duh, and they were escorted from the park. Now, this is just tacky people. While your children watch you, what are you teaching them? You can hear them crying their lungs out and are visibly scared of you. I don’t care who started the altercation or what happened to cause so much anger, but you’re seriously going to throw punches in one of the happiest places on earth? Ridiculous. Resolve your issues at home in private, not at a theme park where you know people are going to be filming you. Don’t bring your mess out here. Walt Disney would be so ashamed of you.

I bet you five bucks this family has already made up and are getting together for their weekly barbecue on Friday.

Editor’s note: This article was originally published on July 8, 2019.