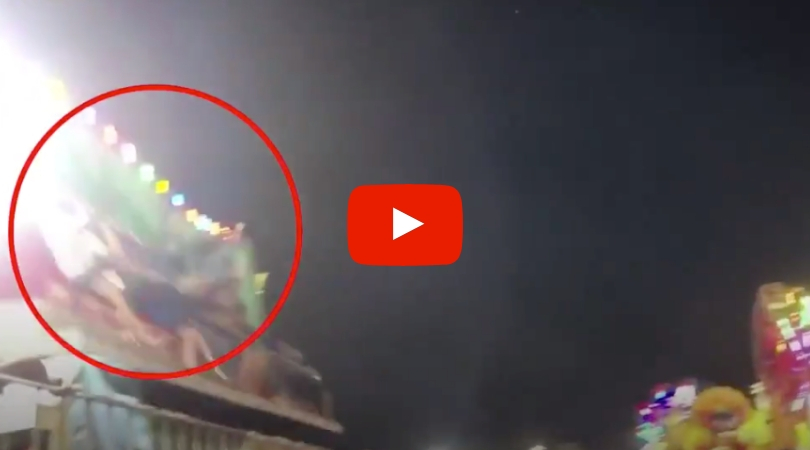 It looks like this carnival is in quite a pickle. Five people, including two children, were literally hurled from a pirate-themed ride at a Thailand carnival. The terrifying moment was caught on video and was quickly shared to social media.

The ride, which is an attraction at an amusement park in the city of Lopburi in Central Thailand, was at the peak of its height when a safety bar holding six people opened. The video shows five people fly off from their seats as the mechanical arm completed its full rotation.

Four people managed to land on the rides’ steel walkway, and one boy was catapulted over a steel railing, landing on the ground. When paramedics attend the boy, they saw blood coming from a head wound but had no other significant injuries.

A 13-year-old girl suffered a broken leg but has quickly been released from the hospital. Several other injured people were taken to another local hospital to be treated. According to the Sun, a 30-year-old man operating the ride, identified as Ake, said he was really sorry for his “carelessness” in neglecting to ensure that he was fully secured.

He stated, “I was in charge at the control center because my friend who also ran [the] station went to the toilet and then had a break. I want to apologize to the people who were hurt and their family, but I did not know much about the machine so I did not check anything before I started it.”

⚠️Video: Revelers escaped serious injuries when they were thrown from a fairground ride on to the floor after the safety bars came loose at a carnival in Thailand pic.twitter.com/i1bq738Amh

As expected, the ride was ordered to close temporarily while authorities checked the owner’s license. According to Police Major General Natthapol Sukrasorn, if the licenses for the ride were legally registered, then the owners will be allowed to continue running their business. If not, police will officially charge them.

If so, the owner of the amusement ride could face prosecution and legal action by those injured. Still, this is truly terrifying, especially since it could have gone way way worse. Thank God the ride wasn’t that high.