Tree Trimmer Nearly Gets Catapulted Off of Swinging Palm Tree 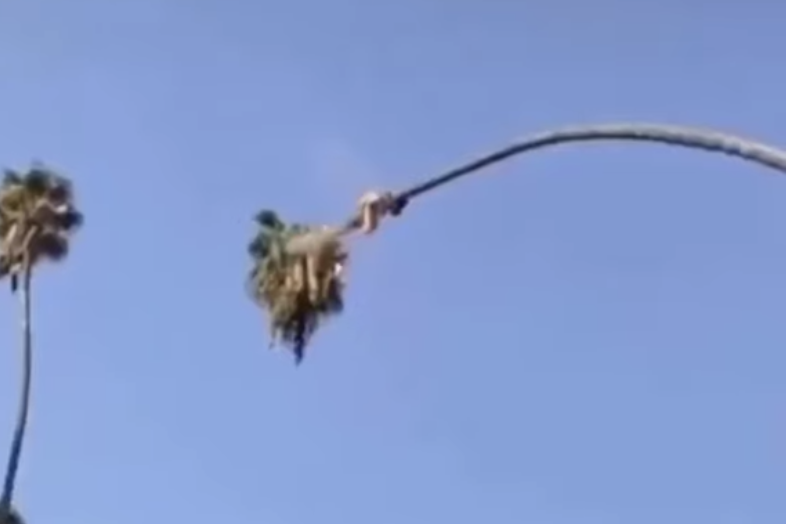 A video of a tree trimmer nearly getting catapulted off the top of an exceptionally tall palm tree he was felling piece by piece with a chainsaw is going viral because, well, it’s pretty nuts.

If you aren’t familiar with how to cut down massively tall trees, this is it. At least, this is it in so much that you have to do it piece by piece from the top. You have to prune it down to the base of the tree, basically. Under no circumstances do you want cut palm trees or any other especially large tree by making your first cut on the side of the tree. Even if you do it at a properly degree angle and push from the opposite side. The rest of the tree is going to come crashing down and ruin some homeowner’s life. Or take it.

As this tree trimming gone wrong video shows, the results could be disastrous. (Worse, even, than what almost happened here.)

This professional arborist had just begun a pretty difficult palm tree removal — this is not the kind of palm tree you mess around with — when he got the ride of his life. It was all captured on video.

As wild as this is, it’s likely this guy knew what he was in for. That’s pretty much just physics. He was fully strapped to the tree with safety equipment and he even had a hard hat on, though considering how high up he was that mostly seems like a formality. When you’re tree pruning that high up it probably doesn’t matter. And if he had been catapulted off that palm tree into some power lines or something the only thing that hard hat would have done is melted to his skull.

But all is well that ends well so hooray for this guy, he’s pretty hardcore.