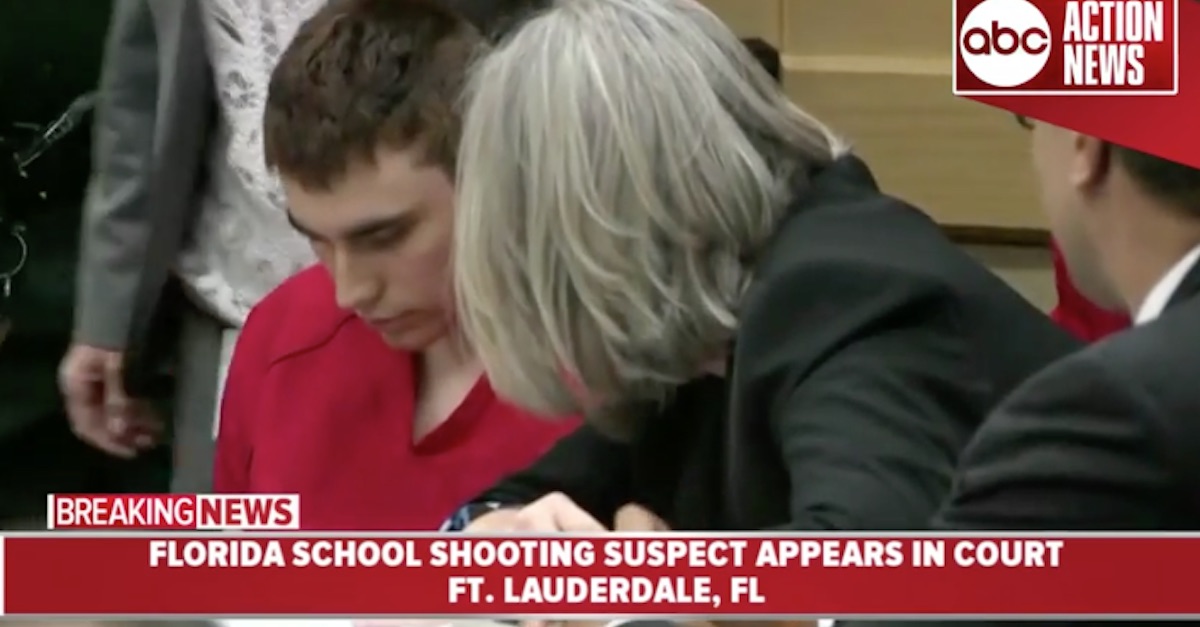 Nikolas Cruz, 19, who confessed to authorities that he shot and killed 17 at Marjory Stoneman Douglas High School in Parkland, Fla., last Wednesday, appeared in court for a hearing just after 1 p.m. on Monday and did not look up once.

Cruz, who has been charged with 17 counts of premeditated murder and may face the death penalty, will likely not appear at another hearing, CBS News reported.

Today’s hearing did not last long and reportedly had to do with how much of this case would remain sealed. Judge Elizabeth Scherer decided that these unspecified documents would remain sealed, WPTV reported, for client access reasons.

Earlier Monday, Florida couple James and Kimberly Snead, who took Cruz in after his mother died, appeared on “Good Morning America” and said he was “polite,” followed their rules “to a T” and “seemed normal.”

They said the only thing out of the ordinary last Wednesday was the Cruz did not go to school and instead texted that he was going to the movies.

RIGHT NOW ON @GMA:
The family that took in the Florida shooting suspect speaks out, in their first TV interview… pic.twitter.com/0TZWznLJIP

The Sneads said their son was also a student Marjory Stoneman Douglas High School, where 17 were killed. They said they are experiencing a “roller coaster of emotions,” saying they are “furious,” “heartbroken,” “angry” and “betrayed.”

“Everything everybody seems to know we didn’t know,” James Snead added.

Kimberly Snead was asleep at the time of the shooting. After James Snead and his son figured out that Nikolas Cruz was the shooter, Snead said, he contacted the police worrying for his wife’s safety.

“At that point, I was panic-stricken for her safety so I called the SWAT officer back to get the police back to my house to check on her,” he said.

While the Sneads were not aware of warning signs, others were.

In case you missed it, the FBI released a statement after the mass shooting saying that “protocols were not followed” after receiving a tip about Cruz’s erratic behavior and “desire to kill” on its Public Access Line (PAL) on Jan. 5, 2018.

NEW: FBI says it received a tip on accused Parkland, Florida, school shooter Nikolas Cruz on Jan. 5, 2018; FBI says reporting "protocols were not followed" and information was not provided to Miami field office at that time https://t.co/CL7ZdfiEYI pic.twitter.com/w46PizLdBy

In September, Nikolas Cruz, using a screen name on YouTube of “Nikolas Cruz,” wrote “I’m going to be a professional school shooter.”

Benjamin Bennight, a Mississippi bail bondsman, was concerned enough after seeing the “professional school shooter” comment on his Youtube channel that he took a screenshot of it on his phone and called the FBI. Two FBI agents visited Bennight the next day.

But the FBI said it never spoke to the Florida teen.

Math teacher Jim Gard told The Miami Herald that Cruz may have been seen as a potential threat well before the rampage. Gard said he believes the school had sent out an email warning teachers that Cruz shouldn’t be allowed on campus with a backpack.

“There were problems with him last year threatening students, and I guess he was asked to leave campus,” Gard told the newspaper.