What’s up, Subway?! Whatever happened to eat fresh? My definition of eating fresh definitely doesn’t include stinky old feet near my delicious 6-inch turkey bacon ranch sandwich. Does yours?

Well, apparently in Michigan that’s exactly what the customers are getting. 46-year-old Tara Williams from Michigan was going in for her usual lunch at the Subway in Ann Arbor when she spotted a subway employee taking it easy in the back. Not only was she relaxing (it’s okay we all do), but the woman had her bare feet up on a countertop near the food prep area where footlong sandwiches are made!

Ew. Ew. Ew. I’m sorry, but that’s just unacceptable and a total lack of respect, not only for the customers but for Subway itself. If I was Williams, I would have run out of there as fast as I could and put a ‘Do Not Enter’ sign on the door, never returning again. If the woman does this in pure daylight during lunch hour, imagine what goes on at night! Nope. Someone call the health department asap.

According to Subway Business Development Agent Kip Klopfenstein, the health department actually got word of it after seeing the now-viral image roaming around on Facebook, because duh, and paid a visit to the restaurant. The Washtenaw County Health Department inspectors visited, saying the behavior of the photo was inconsistent with the “high standards Subway franchise owners follow”. According to Klopfenstein, Subway’s top priority includes food safety and cleanliness, which makes this unacceptable. Which I mean, I sure hope so!

Safe to say the picture went viral, prompting several concerned customers to demand answers. Subway indeed came forward to explain, saying the worker is actually the owner’s wife. She usually works at the location from open and close, which I mean, doesn’t give her an excuse to take off her shoes and prop them up near the prep counter, but okay. Bon appetite, I guess.

The wife denied ever doing this three days after the photo was posted, and there still hasn’t been an admission of responsibility or personal apology to customers. The Washtenaw County Health Department has pledged to make unscheduled visits to the sandwich shop, to make sure they are following all the rules. Yeah, taking a little break from Subway, bye. 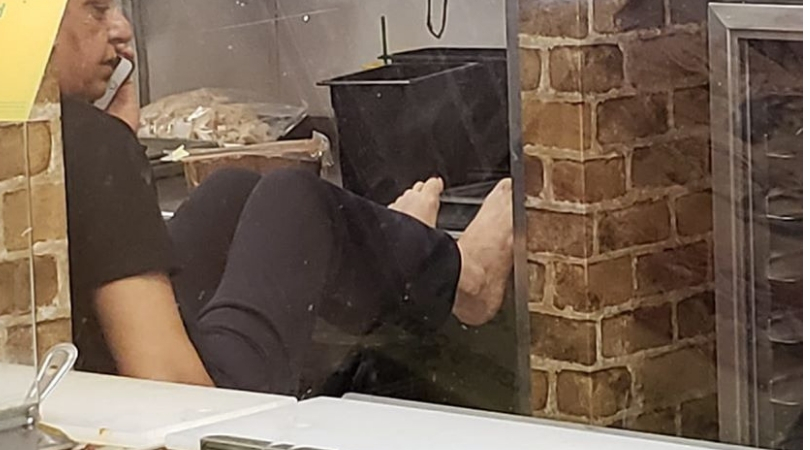