NEW YORK (AP) — CNN sued the Trump administration Tuesday, demanding that correspondent Jim Acosta’s credentials to cover the White House be returned because it violates the constitutional right of freedom of the press.

The administration stripped Acosta of his pass to enter the White House following President Donald Trump’s contentious news conference last week, where Acosta refused to give up a microphone when the president said he didn’t want to hear anything more from him. White House Press Secretary Sarah Sanders said “this is just more grandstanding from CNN, and we will vigorously defend against his lawsuit.”

Trump has made CNN and its reporters a particular target of his denunciation of “fake news” and characterization of the media as an enemy of the people. CNN CEO Jeff Zucker, in a letter to White House chief of staff John Kelly, called it a “pattern of targeted harassment.” The White House initially contended it was Acosta’s refusal to give up the microphone that led to his banishment; CNN said it’s apparent the president didn’t like his questions.

“Mr. Acosta’s press credentials must be restored so that all members of the press know they will remain free to ask tough questions, challenge government officials and report the business of the nation to the American people,” said Theodore Olson, former U.S. solicitor general and one of CNN’s lawyers on the case. The White House Correspondents’ Association backed the lawsuit, filed in Washington, D.C., district court.

“The president of the United States should not be in the business of arbitrarily picking the men and women who cover him,” said Olivier Knox, president of the correspondents’ group. CNN said Acosta was given no warning of the action, and no recourse to appeal it. Acosta traveled to Paris to cover Trump’s visit there this weekend and, although given permission by the French government to cover a news event, the Secret Service denied him entrance, the company said.

“Without this credential, a daily White House correspondent like Acosta effectively cannot do his job,” CNN’s lawsuit said. CNN asked for an injunction to immediately reinstate Acosta, as well as a hearing on the larger issue of barring a reporter.

In an effort to prove the administration’s case last week, White House press secretary Sarah Sanders distributed via Twitter a doctored video sped up to make Acosta’s physical actions toward the intern seem more threatening. That wasn’t mentioned by Sanders in a statement Tuesday. She cited his refusal to yield to other reporters after he asked Trump two questions.

This morning, CNN filed a lawsuit against @realDonaldTrump and top aides. The White House has violated CNN and @Acosta's First Amendment rights of freedom of the press and Fifth Amendment rights to due process. Complaint: https://t.co/43oX6L8xA7 pic.twitter.com/RvJ0Cgh6oi

“The White House cannot run an orderly and fair press conference when a reporter acts this way, which is neither appropriate nor professional,” Sanders said. “The First Amendment is not served when a single reporter, of more than 150 present, attempts to monopolize the floor.” Trump told Acosta at the news conference that “CNN should be ashamed of itself, having you work for them. You are a rude, terrible person.”

Acosta has been a polarizing figure even beyond the distaste that Trump and his supporters have for him. The Poynter Institute, a journalism think tank, editorialized last week that Acosta’s encounter with Trump at the news conference “was less about asking questions and more about making statements. In doing so, the CNN White House reporter gave President Donald Trump room to critique Acosta’s professionalism.”

Watch: Donald Trump Over The Years 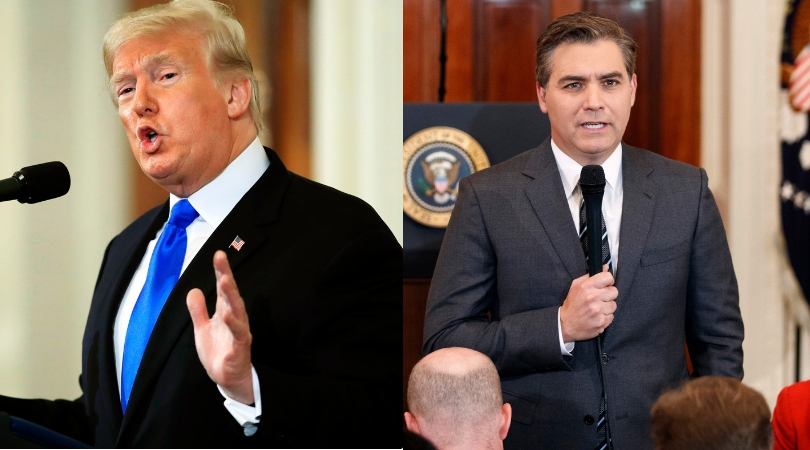