Biden’s Transportation Secretary Pete Buttigieg appeared on CNBC to discuss what his department has been doing recently.

Buttigieg took the opportunity to claim that every decision he is making as Transportation Secretary is ultimately about, you guessed it, climate change.

See a clip of that below…

Now we know why air travel has been an unmitigated disaster under disgraced Transportation Secretary Buttigieg.

“Every transportation decision . . . is a climate decision.” pic.twitter.com/4G09xPSo8J

Buttigieg has overseen some of the largest drops in transportation efficiency, especially airports, since becoming Transportation Secretary.

While Buttigieg is worried about ‘climate change’, Americans have become unable to rely on air travel in any capacity.

The appearance on CNBC centered around the new $1.2 Trillion infrastructure package passed by Congressional Democrats and establishment Republicans in late 2022.

With billions of dollars already being dumped into programs that are currently less efficient than they have ever been, one must ask why additional funding was needed.

The full interview with Buttigieg on CNBC can be seen below…

The Biden Government operates under a very simple principle. More money, less efficiency. Unfortunately, the $1.2 Trillion ‘infrastructure bill’ was one of the smaller spending bills the Democrats passed from 2020-2022.

The ‘American Rescue Plan’ is estimated to cost over $1.9 Trillion. That legislation was passed in 2021.

With our National Debt currently sitting at around $31 Trillion, we must remember that the pandemic was used to justify the passing of massive government spending.

The Government handed out $5 Trillion to the American people alone over COVID.

Redistribution of wealth via government does not work. If you need an example of that, look at the current state of our heavily regulated air travel.

Dilapidated, worn out, and ineffective. Terms synonymous with government. 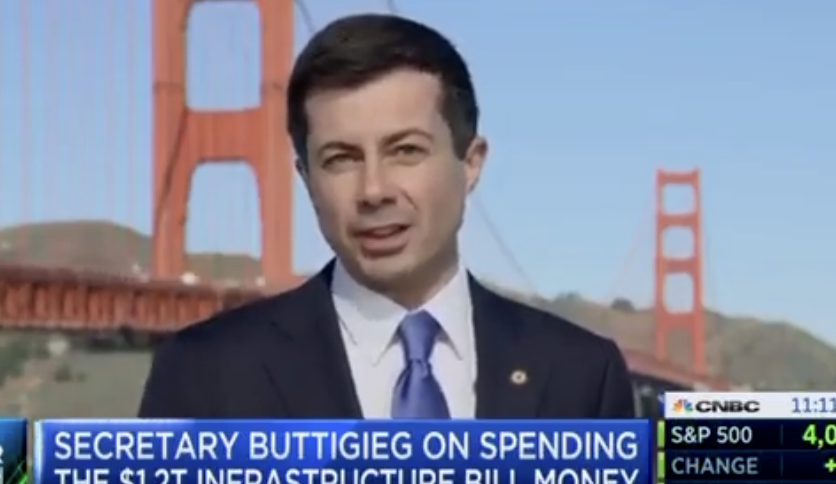